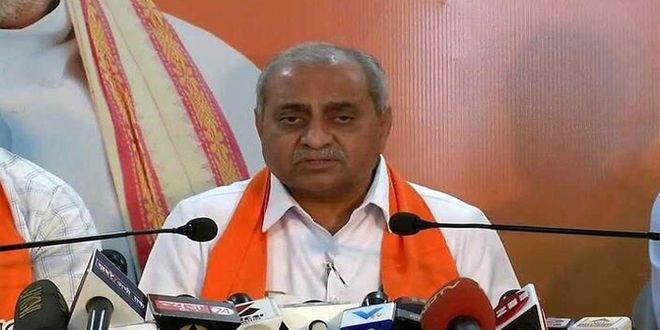 Ahmedabad: Prime Minister Narendra Modi will declare the country open defecation-free on the occasion of the 150th birth anniversary of Mahatma Gandhi on October 2. PM Modi will make the declaration in the presence of over 20,000 village heads at a function at the Sabarmati River front here during his visit to Gujarat, Deputy Chief Minister Nitin Patel said on Wednesday. These village heads (sarpanchs) would include around 10,000 from Gujarat and another 10,000 from across the country, he said.

Dignitaries from across the world are also expected to attend the mega event to mark the 150th birth anniversary of Mahatma Gandhi, said Mr. Patel.

October 2 will be celebrated as Swachh Bharat Diwas across the country. Our Prime Minister would visit Gujarat on that day and declare the entire country open defecation-free in the presence over 20,000 sarpanchs, including around 10,000 other states, Mr. Patel told reporters in Gandhinagar.

To spread the message of cleanliness to the masses, dignitaries from across the world have been invited to attend the event to be held at the Sabarmati Riverfront in Ahmedabad on October 2, the BJP leader said.

People associated with Gandhian institutions, high court judges, Padma awardees, students, educationists and village-level sanitation workers have also been invited for the function, said Patel. He said the 10,000 sarpanchs coming from other states would be taken to different places associated with the Father of the Nation such as Dandi Memorial and Mahatma Mandir. The village heads will also visit the Statue of Unity built in dedication to Iron Man Sardar Vallabhbhai Patel in Narmada district, the deputy chief Minister said.