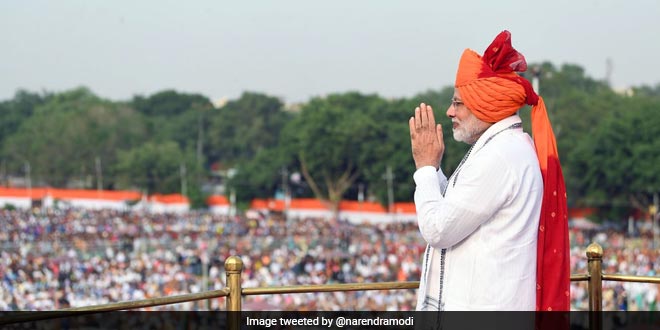 New Delhi: Addressing the nation on the occasion of India’s 72nd Independence Day, Prime Minister Narendra Modi spoke about Swachh Bharat Abhiyan, and how the sanitation and cleanliness mission has given birth to an army of Swachhagrahis, who were making progress towards making the country cleaner. During his address from Red Fort, the Prime Minister remembered Mahatma Gandhi, calling him an advocate of sanitation. He said that for Mahatma Gandhi, sanitation was even more important than independence. While freedom was won by Satyagrahis, cleanliness will be won by Swachhagrahis, said Prime Minister Modi.

Taking inspiration from Satyagrahis created by Mahatma Gandhi, Swachhagrahis have followed the same path, said PM Modi. To celebrate the occasion of Mahatma Gandhi’s 150th birthday on October 2 next year, a clean India with millions of Swachhagrahis playing their part in contributing towards the country’s cleanliness would be a perfect tribute, the Prime Minister said.

Mahatma Gandhi’s inspiration created Swachhagrahis. When we celebrate the 150th birth anniversary of Mahatma Gandhi next year, then millions of our Swachhagrahis will pay tribute to honourable Bapu, in the form of a Swachh Bharat, said Prime Minister Narendra Modi.

Talking about the progress of the Swachh Bharat Abhiyan, the Prime Minister said that if work on constructing toilets had gone on at a pace similar to that of 2013, it would have taken decades to provide sanitation facilities for all. With over 8.5 crore toilets built all over India, the country’s sanitation coverage in rural areas has reached 90 per cent and is well on its way to achieve the target of 100 per cent before the national deadline of October 2, 2019.

The Prime Minister further said that due to the Swachh Bharat Abhiyan, lakhs of Indian children are leading healthier lives today. The campaign has also been praised by international organisations like the World Health Organization (WHO), said PM Modi.

President Ram Nath Kovind during his address on the eve of Independence Day, said that elimination of open defecation was a long-awaited goal for the country.

The Hon'ble President of India, Shri Ram Nath Kovind, in his address to the nation on the eve of Independence Day, talked about the goals the nation is about to achieve, including elimination of open defecation. @rashtrapatibhvn #IndependenceDayIndia pic.twitter.com/uoVzvJ2RNU

As its October 2, 2019 deadline comes closer, the Swachh Bharat Abhiyan is taking multiple steps to ensure that the mission not only meets its targeted deadline, but that the open defecation free statuses of villages, districts, towns and cities are sustained. Recently, the Ministry of Drinking Water and Sanitation launched the rural sanitation survey Swachh Survekshan Grameen to assess sanitation facilities and cleanliness in over 6,900 villages in 698 districts across rural India.