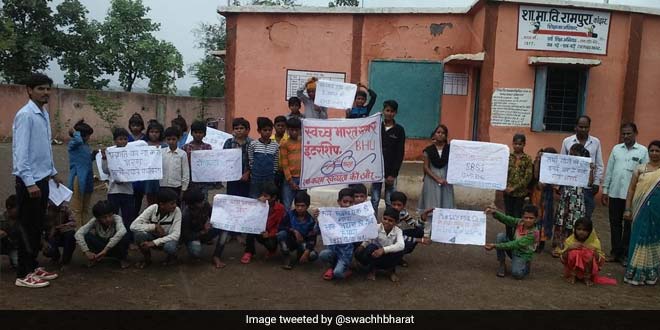 New Delhi: The Swachh Bharat Abhiyan reached another milestone today, as 400 districts in rural India have become open defecation free (ODF). The number of ODF districts in rural India has reached 402, which accounts for 56 per cent of India’s total number of districts. With a total of 712 districts in the country, a little over 300 remain to go ODF. The total number of toilets constructed in the country has exceeded 7.6 crore, with sanitation coverage in rural India going up to 86.85 per cent. In January this year, the Ministry of Drinking Water and Sanitation had declared 300 districts as ODF and it took another six months for the Ministry to declare that 100 more districts have made it to the ODF list.

As the Swachh Bharat Abhiyan enters its final year, the sanitation project has seen steady progress in terms of construction of toilets in the last few years. With the total number of toilets required for an ODF India being 11 crore, more than 8 crore toilets have been built in both rural and urban India. Highlighting the achievement, an official from the Ministry of Drinking Water and Sanitation said that the ODF status of 400 districts showed that the Swachh Bharat Abhiyan is going 100 per cent ODF status by October 2019.

With 56 per cent districts now being ODF, we are on course to achieve the October 2019 deadline. The Abhiyan has now become more organised and systematic, with regular review meetings held across districts on the progresses made by them. All states have taken Swachh Bharat on priority and are ensuring that work is progressing faster than it was even a year back. So we are confident of achieving the target even though the time available to do so is less, said the official from the Ministry of Drinking Water and Sanitation.

In May this year, the Ministry of Drinking Water and Resources had organised for a comprehensive discussion on Swachh Bharat Abhiyan’s progress. Speaking at the event, Parameswaran Iyer, Secretary for Ministry of Drinking Water and Sanitation said that the number of people defecating in the open in India had come down from 55 crore in 2014 to 20 crore in 2018. Mr Iyer also said that past sanitation programmes in India found it difficult to be successful as they were not result oriented. Verification and ODF sustainability is what has contributed highly towards the success of the Swachh Bharat Abhiyan, said Mr Iyer.

While 400 districts have become ODF a few sanitation experts have questioned how the remaining 300 can become ODF within a year. Sushmita Sengupta, sanitation expert at the Centre for Science and Environmeent (CSE) said that focusing on deadlines and targets risks hurried completion of construction of toilets, which can result in people losing interest in them after a while.

“The SBM has managed to construct a number of toilets and monitoring of ODF villages and districts has also been done well in many states. However, the Centre should not hurry towards solely meeting the national ODF target. Hurried constructions can later make the toilets unusable, which defeat the whole purpose of the mission. Rather than focusing only on the deadline, focusing on the quality of construction will be beneficial for SBM in the long run,” said Ms Sengupta.

The Swachhh Bharat Abhiyan has found consistent praise among speeches made by Prime Minister Narendra Modi. While the sanitation project has spurned several success stories of individuals leaving no stones unturned to better sanitation situations in their villages, reports ranging from coercion by officials to build toilets to toilets being used for other purposes have also emerged. While districts becoming ODF are undoubtedly a success of the Abhiyan, sustaining their ODF statuses and bringing in permanent behaviour change will be the key challenges for the Abhiyan. Transition of ODF districts into ODF plus, with focus on waste management and improved sewerage lines. With the ODF status of 400 districts being confirmed, it remains to be seen how long it takes the remaining districts to make a Swachh turnaround.