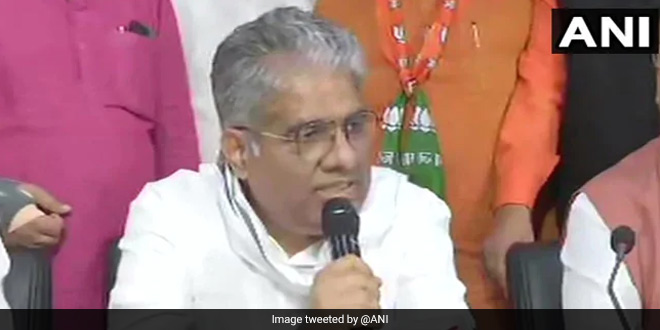 New Delhi: India on Friday said the promises of climate finance and low-cost technology transfer from developed to developing nations must be fulfilled without delay, and stressed that combating climate change is a shared global challenge. Speaking at the Major Economies Forum (MEF) on Energy and Climate, convened virtually by US President Joe Biden, Union Environment Minister Bhupender Yadav said development imperatives are as important as combating climate change and no one should be left behind. “Combating climate change is a shared global challenge. Our response must be based on the fundamental principles of equity and common but differentiated responsibilities and respective capabilities.

“Developing countries have consistently risen to the challenge through enhancement of ambition and acceleration of actions. Climate justice requires that the promises of climate finance and low-cost technology transfer from developed countries to developing countries must be fulfilled without any further delays,” the minister said while representing India. He said,

The call of science has been consistent. We humans have caused global warming and it is up to us to tackle the climate crisis with resolute actions.

He said clean energy transition is the key to unlocking solutions for the climate challenge, and India remains at the forefront of global efforts through a very ambitious energy transition towards renewables. Noting that India has enhanced its ambition manifold and announced an ambitious target of 450 GW of Renewable Energy by 2030 which is “a high bar by any measure”.

In fact, it is amongst the most ambitious targets in the world. Our solar installed capacity has increased 15 times in the last six years alone. We have set up the International Solar Alliance to harness the energy of the sun and foster international cooperation in the sector. Our non-fossil fuel installed power capacity at 153.88 GW is already 39.64 percent of the total installed capacity. We are on track to meet and exceed our Nationally Determined Contribution (NDC) in this regard, the minister said.

Also Read: Committed To Ensure Clean Air And Blue Skies To All In Country: Environment Minister

The minister said India has enhanced its ambition in biofuels by advancing the date for achieving 20 per cent ethanol blending in petrol, from 2030 to 2025.

In 2021, we have also launched a National Hydrogen Mission for producing hydrogen from clean fuel sources, he said.

The minister said the NDCs are a significant step towards achieving the temperature goals of the Paris Agreement.

India’s NDCs are ambitious, and they are a significant contribution towards achieving the temperature goals of the Paris Agreement, he said.

Further, we will ensure that our successive NDCs reflect an ambitious progression over the existing ones, as required under the Paris Agreement, he said. The minister also referred to the recent IPCC report, saying it reaffirms that cumulative emissions up to net zero will determine the eventual global temperature that is reached by the end of the century. “Global carbon budget is a finite resource, and India has used up far less than its fair share. India’s per capita emissions are about a third of the global average.

Our share of world population is 17 per cent but share in cumulative historical emissions is just four per cent. Our current annual emissions are only 5.2 per cent of the global emissions, he said.

“It is clear that “we are not a part of the problem. But we want to be a part of the solution to the climate crisis,” the minister said. He said the world needs rapid, sustained and deep emission cuts in this decade rather than distant targets.

India is walking the talk, through a concerted push for renewables, hydrogen and biofuels, alongside several sectoral transitions including e-mobility. Let us come together to keep a Paris aligned temperature goal within reach, with ambitious actions in this decade, he said.

As a part of the Paris Agreement, India plans to reduce its carbon footprint by 33-35 percent from its 2005 levels by 2030 and have 40 percent of its total installed power generation capacity from renewables by 2030. Recently, India-US launched Climate Action and Finance Mobilisation Dialogue (CAFMD) under Climate Clean Energy Agenda 2030 as a step towards tackling climate change and reducing carbon emissions.

No Clinical Trial Of COVID-19 Jab On Transgenders, Fear And Mistrust Keep Majority Of Them Away

Covid Variants Getting Better At Travelling Through Air, Study Shows