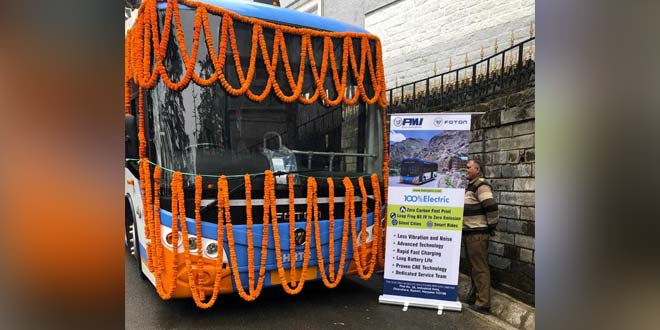 New Delhi: The Queen of Hills, Shimla received 50 electric buses on Monday which is Himachal Pradesh (HP) government’s third electric vehicle project in the state. The first project involved  plying of 25 electric buses in Manali-Rohtang stretch in 2017 and the second project saw deployment of 50 buses across the state in 2018. In case of Shimla, the first electric bus under this project was flagged off by Chief Minister Jai Ram Thakur from State Vidhan Sabha Complex. Later eleven buses were flagged off for local destinations on nine different routes by the Himachal Road Transport Corporation (HRTC). CM Thakur shared about the deployment of the electric buses in Shimla on social media and said that buses are equipped with the latest equipment and have zero emission, which will go a long way in protecting the city from pollution. He also urged the residents and tourists to use electric buses and contribute in making Shimla pollution free and said that electric vehicles would also be introduced in other districts of the state in a phased manner.

According to Hemender Kumar Gupta, Chief General Manager, the buses deployed in Shimla have been procured by HRTC from PMI Electro-mobility Solution Limited with the technological partnership with Foton, a Chinese enterprise. These are 30-seater buses and can also comfortably accommodate almost 20 standing passengers. These buses can run for about 150 Km per full charge and can be charged fully within half hour by fast chargers installed at Dhalli, Shimla. The bus fares for the electric bus is the same as conventional buses which is Rs. 1.75 per Km and nothing extra is being charged from the passengers.

The cabs were launched last year. With good range and these cabs are capable of running for almost 120Km with one full charge of 5-6 hours and are receiving extremely good response especially from tourists.

Mr. Gupta asserted, “Electric vehicles is the future of public transportation in HP and this would go a long way in protecting the pristine environment of Shimla city. We are getting a very good response from the residents of Shimla as well as the tourist. Keeping this in consideration, HP government has started building a dedicated depot for electric buses at Tutikandi near Shimla Inter State Bus Terminal (ISBT).”

Talking about the impact of electrification of public transport in the state, Mr. Gupta said,

We can definitely feel the difference in the level of pollution at places where electric buses and cabs are running, especially at crowded city areas. But these are still very less in number and we have a long way to go to become completely pollution free. We do see people’s transport preference being changed over the last two years. People have started using electric buses and taxis more.

Mr. Gupta shared that during the first electric bus project, they found that the public was facing inconvenience due to the ‘zero-noise’ feature of electric buses. He said,

We in India are used to the noise of combustion engine. The vehicles with no-noise make it difficult for people to realise that a vehicle is approaching them. We realised this during the first project itself after which we introduced a sound system- music, horns, and announcements- through which people are made aware of the electric vehicle running near them.

To support the smooth running of electric buses in the state, the Himachal Pradesh Government has built charging infrastructure at various bus depots across the state by installing transformers to provide for additional electricity consumption for charging public transports and sufficient charging points. The government has recently installed one transformer procured from Himachal Pradesh State Electricity Board (HPSEB) at Dhalli for electric buses deployed in Shimla.

“Come Up With Cleaner Ways For Eco-Friendly Use Of Natural Resources”, Says President Ram Nath Kovind

A Step Towards New And Green India: PM Narendra Modi Flags Off The World’s First Diesel To Electric Locomotive In Varanasi