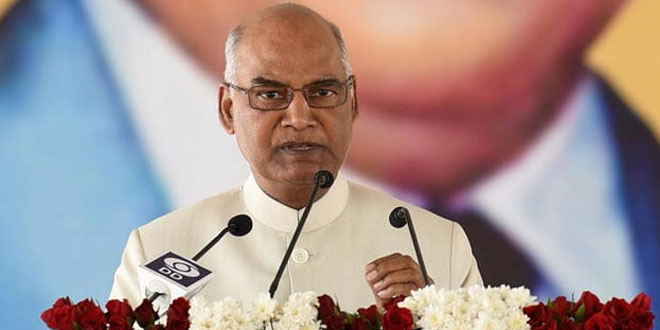 President Kovind was speaking at the inauguration of the International Conference and Exhibition on Energy and Environment: Challenges and Opportunities (ENCO 2019), organised by the Council of Scientific and Industrial Research (CSIR). Stressing that while coal will remain the predominant energy source for most countries, including India, going by global trends, renewable sources will also grow, President Kovind also emphasised on the development of eco-friendly technologies for green mining.

The President said India was committed to providing power to all citizens at an affordable cost as well as boost the national economy through an industrial revolution in tune with Industry 4.0. Industry 4.0 refers to the next level of the industrial revolution that encompasses the use of robotics, artificial intelligence, smart manufacturing and increasing digitisation.

Given this backdrop, I would advise this august gathering to deliberate on the development of eco-friendly technologies for green mining. It is important for producers and consumers of conventional energy to evolve more efficient and cleaner processes to ensure environment-friendly use of natural resources.

The President said that the conference was a suitable platform for the international community to disseminate, deliberate and showcase various activities related to energy and environment, and discuss research and development opportunities and pathways that could lead to a prosperous, sustainable and secure energy future. He said,

I am confident that after three days of deliberations, it will be possible for this gathering to come out with practical and doable recommendations that can make our planet not only more industrially advanced but also help in creating healthy ecosystems and environment for future generations.

During the three-day conference, an industrial exhibition has also been organised on the Vigyan Bhawan lawns which were inaugurated by Union Science and Technology Minister Harsh Vardhan. At the inauguration event, Mr. Vardhan said the world now recognizes India’s achievement, initiatives and visionary approach in the area of clean energy. He said,

India has mounted the world’s largest and most innovative energy-efficient lighting programme, 330 million LED lights, resulting in a reduction of 32 million tonnes of carbon dioxide annually.

Around 1,000 delegates, representing policy makers, regulators, entrepreneurs, administrators, environmentalists, geo-environmentalists, researchers, academicians, and technocrats, from India and abroad are participating in the conference. The conference aims to deliberate and identify the needs to innovate new techniques, technologies and applications for clean, safe, symbiotic sustenance of society, environment, energy, and industries post 2020.

Shimla, The Queen Of Hills Gets 50 Electric Buses As Himachal Pradesh Accelerates Its Electric Vehicle Project