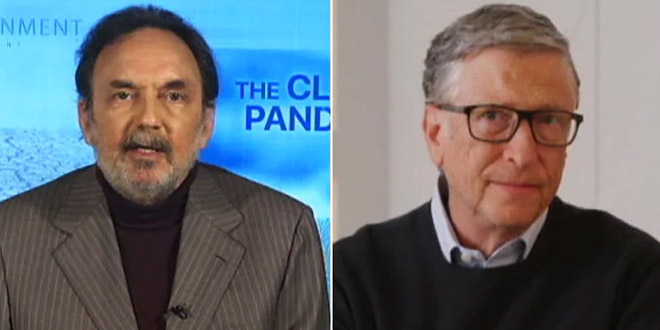 New Delhi: The increasing air pollution around the world is creating a health emergency and is becoming deadlier with each passing day, according to ‘The Global Burden of Diseases Study 2019’. The study that was published in the Lancet Planetary Health in December 2020 and supported by Bill and Melinda Gates Foundation highlighted that in 2019, about 1.67 million in India people lost their lives to air pollution which was 18 per cent of the total deaths in the country. With an aim to raise awareness and provide solutions to the unfolding catastrophy of climate change, Bill Gates, Microsoft founder and philanthropist has now written a book titled ‘How to avoid a climate disaster’. In an exclusive interview with NDTV’S Prannoy Roy, Mr. Gates spoke about ways in which emissions can be reduced to zero in a targeted way.

Mr. Gates, whose company Microsoft has set a goal of becoming carbon negative by 2030 and has been able to reduce its carbon emissions by 6 per cent last year said that the world adds 51 billion tonnes of greenhouse gases to the atmosphere every year. He said that the aim should be to reduce the emission to zero, no matter how difficult it may be. Mr. Gates asserted,

Getting it from 51 billion, which was the total number of tons emitted per year globally, down to zero is going to be the hardest thing humanity’s ever done. And it’s going to require more capital investment, more innovation, more collaboration. But it’s pretty imperative that we do it. The destruction of natural systems and the change to the weather and just the heat that a country like India will be dealing with, and what that means about outdoor work. It’s really disastrous. And I wish the goal was only to reduce 30 or 40 per cent, but as long as you add carbon dioxide to the atmosphere, it stays there for thousands of years. And so, the increase in temperature is basically the sum of all the emissions over a long time in the past. So as long as you’re adding any, the temperature is going up, and that means we have to look at all the sources of emissions.

According to Mr. Gates, producing things like cement, steel and plastic cause about 31 per cent of the total global emissions, which is the highest, followed by electricity which causes 27 per cent of the total emissions. The other major sources of greenhouse gas emissions are growing things like plants and animals (19 per cent), transportation including planes, trucks and cargo ships (16 per cent) and temperature regulation like heating, cooling and refrigeration (7 per cent). 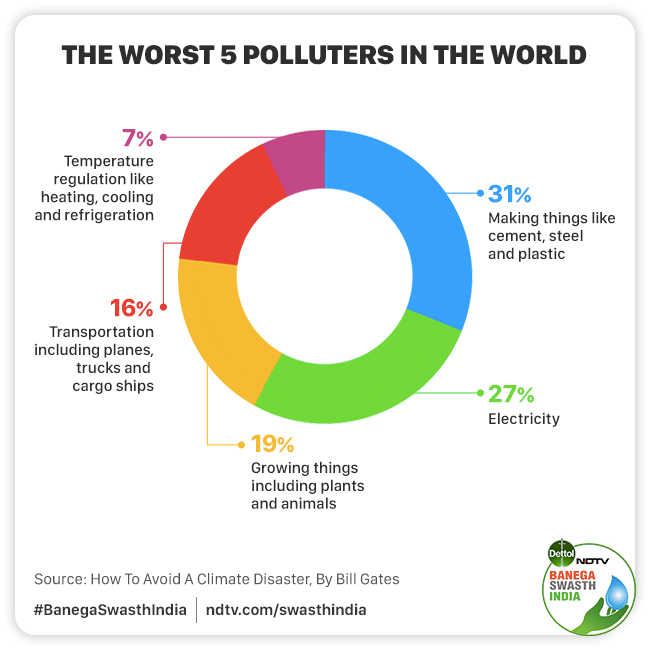 According to Mr. Gates, five activities are the biggest contributors to greenhouse gas emissions in the world

India Is Going To Be One Of The Most Affected Countries Due To Global Warming: Mr. Gates

Mr. Gates highlighted that as India moves towards using electricity for transportation and other energy needs, it will be required to increase its electricity needs. He added that as the country’s economy grows, more people will be expecting air conditioning and lighting. In this scenario, the biggest challenge for the country will be – building cheap, reliable and clean electricity capacity. Mr. Gates said,

India is going to be one of the most affected countries in the world because it’s near the Equator.

Giving examples of clean energy initiatives and innovations from across the world, Mr. Gates said,

Well, lithium-ion batteries for electric cars. You know, that’s a great story. The cost of solar panels, the cost of land-based wind. There’s work on in United Kingdom now to incentivise the price of offshore wind to come down. So that’s very promising work. There are various ways of growing food or making food that mostly companies in the United States of America are working on, that you can create something but no animals were involved in that. A lot of people are going to try and make cheap hydrogen in a green way, because if you could have that, you could use that for a lot of processes.

While talking about the extra cost of switching to green production methods, Mr. Gates emphasised on reducing the extra cost which he calls as “green premium” down by 95 per cent over the next 30 years through innovations. He said,

Well, that’s where innovation comes in. And so, we have to have policies that we spend more on the basic research and development (R and D) and we target that R and D at all the areas of emissions. And then we have to have innovative companies who can partner with the big companies to actually pioneer these new approaches, some of which will fail, many of which will fail. And then we have to have a market, that even if the green premium isn’t zero yet, if somebody is bringing it down, then there’s some volume that rewards them and they get on a learning curve. And so, the rich countries, they did buy a lot of solar panels and the prices came down even more than expected and things like electric cars and electric buses, those prices because of the lithium-ion battery improvement, those will come down. So that’s almost a solved area over the next 10 or 15 years. Electric cars will not have a green premium over gasoline cars. Their range, their costs, the quickness, you can recharge them, the charging points.

Mr. Gates On Use Technology To Fight Pollution

According to Mr. Gates, technology can provide solutions to the problem of pollution. While talking about polluted rivers he said,

Toilets are a huge problem, because the way it’s done in rich countries is you bring a lot of water in, which is expensive and you make it dirty and then you send it out and you have to have all those pipes, and those processing systems. A lot of sewage isn’t processed at all. It goes straight into the river as a raw thing. Even the Ganges, sadly. Now the government has set some goals for doing these clean-ups. And we do have some new processing capabilities that don’t take as much land and they don’t create as much smell as a typical way of processing faecal sludge. We keep reducing the cost of those, so that they become attractive. In the long run what we actually want to do is make the toilet itself do that work. So, it burns the solids and it filters the liquids. And so, we call that the reinvented toilet, and that would be a huge benefit to not only clean up rivers, but stop all these diarrhoeal disease and the unpleasantness of pit latrines or, the woods getting just lots of human waste there. And so, our Foundation specialises in this toilet or waste management.

While talking about the ongoing COVID-19 pandemic and vaccines against coronavirus, Mr. Gates said that Bill and Melinda Gates Foundation is working towards supporting manufacturers of vaccines and the next six months will make a huge difference in this regard. He said that in the earlier times before his Foundation helped in creating GAVI (Global Alliance for Vaccines and Immunisation), the time lag between poor countries getting a vaccine after a rich country used to be about 20 years but now it will be six month or 18 months in worst scenario.

Mr. Gates said that environmental degradation is worse than virus pandemic in terms of number of deaths. It is killing five times as many people as the pandemic at its peak, he said.

The climate change, because it gets worse every year, it creeps up on you. And, by the end of the century, it’s very, very bad. It is a slower process. and you have to take action way before the bad stuff happens. And there’s not just one invention, like the vaccine, that can get you out of the problem. It does fit in that you depend on your government to look ahead on your behalf. And you know, most governments, including the US, feel like they weren’t ready for this pandemic. A few countries like Australia did a better job of getting the diagnostic and limiting the total number of cases. If this had happened 10 years ago, we would have been much worse because our ability to make new vaccines was not as strong, Mr. Gate.

While signing off, Mr. Gates said that he is hopeful to see the younger generation becoming aware about the importance of environment conservation and sustainability. He said,

Their interest in it as a moral cause to not be a generation that’s destroying these natural ecosystems and leaving a tragic situation for their children, that’s one of the reasons to be hopeful that, even though we need to work hard for 30 years, and even be a little bit lucky on innovation, the reason I think that will happen is because of that young generation.