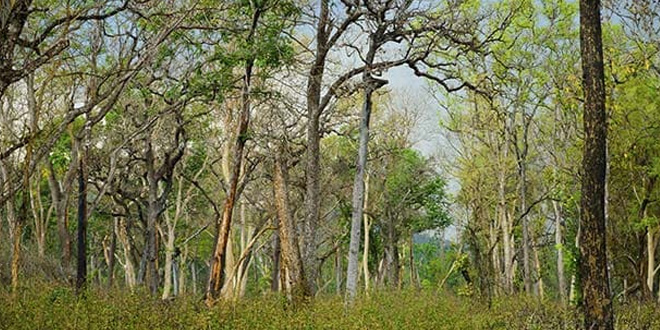 New Delhi: The COVID-19 pandemic battered and bruised the world in 2020, teaching the value of human life, but an evident positive impact was that it helped the environment bounce back to its glory, even if temporarily. While schools, workplaces, transport and industry remained closed for a large part of the year as people stayed put in their houses, the grey skies started turning blue and pollutants in the air began to settle.

According to the Central Pollution Control Board (CPCB), there was a significant improvement in air quality during lockdown (from March 22 to May 18) as PM2.5 in Delhi reduced by almost 50 per cent as compared to levels observed during 2019. The pollution level in India’s five most-polluted cities – Ghaziabad, Delhi, Noida, Greater Noida and Gurgaon – which are also in the top 10 globally, came down by over 50 per cent during the first 10 days of the lockdown imposed to combat COVID-19 outbreak, said Greenpeace India.

Besides the air quality, there was improvement in water quality of seven rivers – Yamuna, Brahmani, Godavari, Cauvery, Krishna, Tapi and Brahmaputra – which was attributed to minimal industrial effluent discharges in view of closure of almost all industries, no human activities involving disposal of worshipped puja materials and garbage, no anthropogenic activities such as outdoor bathing, washing of clothes, vehicle washing and cattle washing, no pilgrimage activities etc. during lockdown phase, the CPCB had said.

The panic caused by the pandemic came as a blessing in disguise for animals as the government kept humans away from them and their habitats. Swinging into action after a tiger at a US zoo tested positive for COVID-19, the environment ministry had asked all states and union territories to restrict the movement of people in various national parks and sanctuaries to avoid any human-animal contact.

However, as per a study conducted by wildlife trade monitoring network TRAFFIC, incidents of wildlife poaching in India more than doubled during the COVID-19 lockdown with 88 animals being killed for meat and trade during this time compared to 35 in the pre-lockdown days. The brutal killing of a pregnant elephant in Kerala, after she was fed firecrackers-filled pineapple, took social media by the storm, prompting the government to investigate the matter. The fear of the pandemic also led people to believe at one point that migratory birds were spreading the disease. However, the government busted the myth saying that “fear psychosis” was being created by people and that there was no connection of coronavirus with migratory birds.

The year gone by also saw India taking the presidency of the 13th Conference of Parties to the Convention on the Conservation of Migratory Species of Wild Animals (CMS COP 13) which was held in Gujarat in February, just a month before the coronavirus began wreaking its havoc in the country. During the conference, the countries adopted an accord, the Gandhinagar Declaration that maintaining and restoring ecological connectivity is one of the top priorities for CMS. Three migratory birds – Great Indian Bustard, Asian Elephant and Bengal Florican – were also classified as “endangered migratory species” by a UN body, paving the way for trans-boundary conservation efforts.

The conference saw participation from over 100 countries except China as it opted out of it due to travel restrictions in the wake of coronavirus outbreak, which began from a single case in its city of Wuhan. Fear of the impact of COVID-19 on the world economy also caused the government to worry about achieving the climate goals under the Paris Agreement making Environment Minister Prakash Javadekar ask people not to get “too romantic” about the blue skies, fresh air and the green earth.

Noting there was a direct link between COVID-19 and Sustainable Development Goal (SDG) of wellbeing and health, which is a part of the SDGs set in 2015 by the United Nations General Assembly and intended to be achieved by 2030, the minister had said that the economic consequences of the pandemic may lead to weakening India’s commitment to climate action.

However, few months later, the minister announced that India was the only G20 country in compliance with the Paris Agreement targets and that none of the developed nations are compliant. The government remained on its toes in tackling waste generated due to the coronavirus cases in the country with the central pollution watchdog CPCB repeatedly issuing guidelines on waste disposal. As the cases continued to rise, the CPCB directed all health care centres across the country to keep separate colour-coded bins or containers in wards and maintain proper segregation of waste as per the Bio-Medical Waste (BMW) Management Rules 2016 as amended.

It said the biomedical waste, if any, generated from quarantine centres or camps should be collected separately in yellow coloured bags and bins. The Environment Ministry also expedited clearances to bulk drug projects to fight coronavirus by issuing a notification which said the expeditious environmental clearances given to units involving active pharmaceutical ingredients (API) and bulk drug intermediates will ensure overall preparedness and availability of drugs to reduce the impact of the outbreak.

The year 2020 also saw a huge tussle between the Centre and environmentalists over the amendments to the environment impact assessment (EIA) with the latter alleging that it intended to bring in controversial amendments such as post-facto grant of approval, exemption of several large industries from public hearings, permission for industries to submit just one compliance report a year rather than two, increased validity of the environment clearances for mining projects and river valley projects, and many more.

While some students from universities and institutions across the country sought that the draft EIA be put on hold as it was published during the pandemic and people could not give their opinions, some sought withdrawal of the draft alleging it was controversial, but the government denied all allegations and responded in negative saying it had already extended the deadline by over a month. Another decision by the Centre that drew sharp criticism was its grandiose plan to redevelop the Central Vista, which recently got the nod of expert appraisal committee (EAC) bringing it a step closer to getting environmental clearance.

Experts contended that the Rs. 13,450 crore project was government’s way of “pampering itself” without considering that the project is going to sacrifice huge green cover and make the air toxic with its construction and demolition dust. Several jaw-dropping reports were released this year, with one of them claiming that India would need a total land footprint roughly the size of Himachal Pradesh or Chhattisgarh to achieve its ambitious target of 175 giga watts (GW) renewable energy by 2022.

This report was based on the research conducted by environmental think tanks working closely with the government – The Nature Conservancy and the Centre for Study of Science, Technology and Policy (CSTEP). Another report claimed that over 4.5 crore people will be forced to migrate from their homes in India by 2050 due to climate disasters including floods, droughts and cyclones, three times more than the present figures.

The report based on a study conducted by International agencies ActionAid International and Climate Action Network South Asia, said that by 2050, over 6 crore people will be displaced in South Asia alone. It said that in 2020, the number of people displaced in India is 1.4 crore. A report by Greenpeace Southeast Asia with inputs from the Centre for Research on Energy and Clean Air (CREA) said that the cost of air pollution borne by India from fossil fuels is 5.4 per cent of the country’s annual GDP and is estimated at USD 150 billion annually, the third highest worldwide.

The year ended on a proud note for the country with 42 wetlands from India, the highest in South Asia, being added to the list of recognised sites of international importance under the treaty of Ramsar Convention, which has 170 countries party to it and over 2,000 designated sites recognised under it. The latest site to be added from India is a high-altitude wetland complex of two connected lakes, Startsapuk Tso and Tso Kar, in Ladakh. In last three months, four wetlands, the Lonar lake in Maharashtra and Sur Sarovar, also known as Keetham lake, in Agra, Kabartal in Bihar’s Begusarai district and Asan Conservation Reserve in Dehradun were added to the list. The government also made it clear this year that India’s approach will be positive and constructive at the crucial 26th UN Climate Change Conference (COP 26) scheduled to be held in Glasgow, UK in November 2021, and it will make all efforts to make it a success.

Related Topics:
Coronavirus Environment
Up Next