New Delhi: 34-year-old Rinku Kumari from Bihar shunned an easygoing life to work towards the betterment of her state and its residents. For the past one year, she swings into action every morning around 4 am in a bid to catch hold of people who are defecating in the open then educate them about its ill-effects and in her own way contribute towards Bihar’s swachh dream. Not just that, Rinku also goes door-to-door to sensitise people about Swachh Bharat Abhiyan and why constructing a toilet at home is a necessity. Till date, Rinku has touched thousands of lives and has helped construct more than 2,000 toilets in two panchayats of Bihar. Sharing her journey as a swachhagrahi with NDTV, Rinku said,

A toilet is a must and a basic necessity for everyone, especially for women. Yet, this is not available to many in our country. As a social worker, I used to go to different people’s houses. The one thing I saw and never appreciated was how people were accustomed to defecate in the open. Apart from this, I saw how people were regularly falling sick because of infections like diarrhoea, the one infection that can simply be avoided if a person starts using a toilet at home. I wanted to help them out, but didn’t know from where to start. 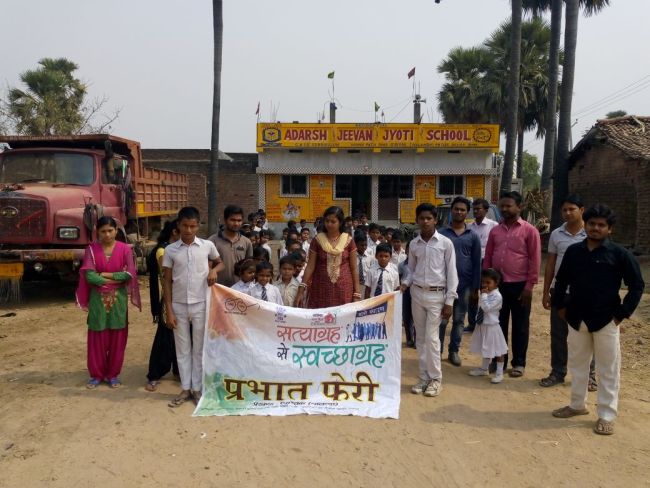 Rinku has helped construct more than 2,000 toilets in Bihar

Explaining her transition from a social worker to a swachhagrahi, Rinku added,

Last year, I attended one swachh bharat abhiyan workshop and that was it. Soon, I started taking more and more workshops in order to learn different techniques so that I can motivate people to construct a basic necessity – a toilet. 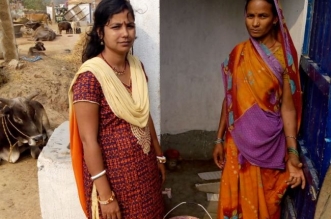 Rinku Kumari giving training on how to keep the toilet clean

Rinku started taking charge of one panchayat at a time with an aim to make it open defecation free. She goes door-to-door twice daily and motivates people to construct toilets at home. Explaining one of her favourite ways in which she motivates most of the villagers to construct a toilet, Rinku added,

“I would ask all the men to give me their mobile phones, which is still a precious commodity in the village. Then I would ask them – what will you do if you lose your mobile phone. Together with sadness, they would say, if money allows then we will buy a new one. To that my response would be, if you don’t have a toilet at home and if women of your house continue to defecate in the open and someday some unfortunate incident takes place then what will you do. In villages these tools are very effective. The first panchayat I was working in became free from open defecation last year in August. Within two months of using triggering effect there, people actually started constructing their own toilets.”

Apart from this, Rinku also gives training to the villagers on how to construct a toilet at home, how to keep it clean and how to use it. She adds,

The villagers are not trained to use a toilet at home, they need to be taught and taught well. If they will face problems, then they will start going out in the fields, as it is an easy option. To change this, wherever I go, I make sure, I am training villagers to construct their own toilet, how to use a toilet and how to keep it clean.

Now, Rinku has slowly formed her own nigrani samiti (Watch Committee) who ensure people are constructing toilets, using them and keeping it clean so that open defecation free status is sustained.

Rinku’s swachh efforts have also been recognised by Prime Minister Narendra Modi, recently during the Chalo Chamaparan concluding ceremony in Bihar that was held on April 10 to mark the centenary celebrations of Mahatma Gandhi’s Champaran Satyagraha and kick-start the final leg of Swachh Bharat Abhiyan.

Rinku was among the 10 swachhgrahis chosen to be felicitated with Rs. 51,000 and a certificate.

The swachh warrior signs off by saying,

The need of the hour is to have an active participation from people for the Swachh Bharat Abhiyan. I urge more and more people to come forward and educate people about constructing a toilet. That’s the best gift anyone can give. We all need to come together and make India swachh by October 2, 2019.

Currently, in Bihar, 49 lakh toilets have been constructed in the rural areas and the state has managed to improve the sanitation coverage from 21% in 2014 to 54%. But, the sad part is that till now not a single district has been able to achieve the open defecation free target.

Rinku Kumari from Nalanda district, Bihar brought about change not only to her village but also to 10 wards in the vicinity, by making them #ODF. Her determination and grit towards the #SBM is a motivation for all of us. #ChaloChamparan #चलो_चंपारण pic.twitter.com/4U3JkpIMtH

‘First Motivate Yourself To Use Toilet And Then Encourage Others’, Says 38-Year-Old Swachhagrahi From Andhra Pradesh Who Made His Village Open Defecation Free

Swachh Warrior’s Journey Which Began At Age 19, Sees Eradication of Open Defecation In 82 Gram Panchayats And One District In Four Years