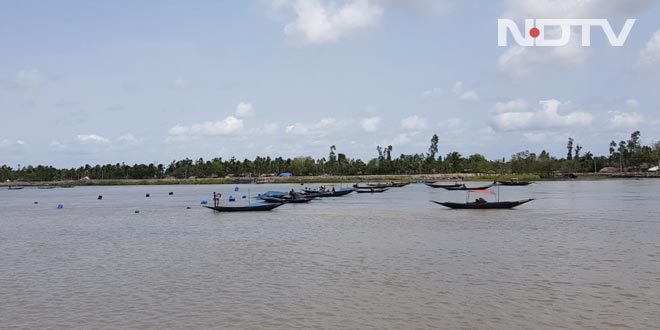 Over the years, the saline water has increased in Indian Sundarbans due to lack of fresh water availability and rising sea levels: Expert

New Delhi: It’s a bright sunny afternoon. The clock tells the time to be at quarter past three. As our boat moves towards Lahiripur village located in Gosaba in Canning sub-division of South 24 Parganas district, we see women wading waist and some even neck deep in brackish water. Dragging rectangular nets in the rivers and creeks of the Indian Sundarbans, these women are involved in the practice of fish, crabs, and prawn collection for their living. But this living comes with a price tag attached to their health and overall well-being.

You see that woman entering the river, she is from a tribal community involved in crab collection. The water here is extremely saline but risking their health, women enter the river to put food on the table. Regular exposure to saline water results in urinary infection, uterine cancer and reproductive issues. Only when they develop any symptom and report it to us, a disease is diagnosed, said Santwana Mondal, an ASHA worker from Lahiripur village. 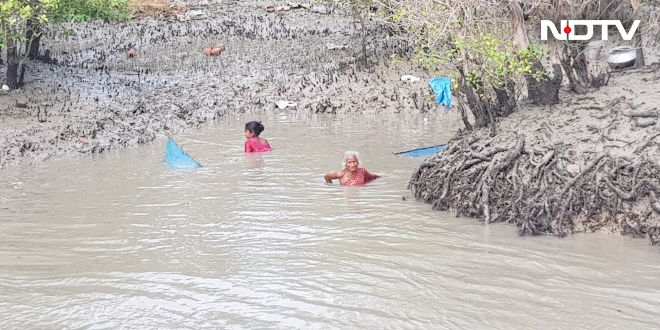 In Sundarbans, women wade through brackish water to earn a living

Ms Mondal has been working as Accredited Social Health Activist or ASHA since 2012 all for Rs. 4,500 a month. When asked why do these women risk their lives, Ms Mondal said,

People who have money open up a shop or migrate to cities but poor people don’t have an option.

Over the years, the saline water has increased in the Indian counterpart of Sundarbans – spread across South 24 Parganas and North 24 Parganas – due to non-availability of the freshwater. Explaining the same, Dr Pradeep Vyas, IFS (Retired), Ex-Chief Wildlife Warden, West Bengal, said,

In the 16th century, a neo-tectonic shift took place which resulted in the downward shift of the delta in the Eastern part of the Sundarbans which is currently in Bangladesh. As a result, more freshwater started flowing towards the East and less freshwater was available in the West which is now the Indian Sundarbans. Secondly, during the development phase, when Ganges water started getting diverted for irrigation purposes and other uses of mankind, the availability of freshwater declined. On the Indian Sundarbans, only the Hooghly river and Raimangal river which receives the freshwater from the Ichamati river and Bangladesh, have some elements of freshwater. Central Sundarbans is nothing but the backwater of the sea.

Another reason behind an increase in salinity is the rising sea levels that inundate lands, increase tide and storm surge levels, and push saltwater farther inland through ditches and tidal creeks. On June 28, 2019, the Ministry of Earth Sciences said in the Lok Sabha that of the big ports in India, Diamond Harbour in West Bengal has witnessed the largest rise in sea levels. Recent studies have revealed that the trends of sea-level rise are estimated to be 1.3mm/year along the Indian coasts during the last 40-50 years. However, at Diamond Harbour, the rise was almost five times higher at 5.16 mm per year. The mean sea-level rise for Diamond Harbour was based on recordings over the period from 1948 to 2005.

Rising sea levels can exacerbate the impacts of coastal hazards such as storm surge, Tsunami, coastal floods, high waves and coastal erosion in the low-lying coastal areas in addition to causing gradual loss of coastal land to sea, noted the Ministry in the parliament.

The sea-level rise is higher in West Bengal, particularly in the Sundarbans delta because of a high rate of sedimentation, according to Dr Sugata Hazra, Professor, School of Oceanographic Studies, Jadavpur University.

Dr Dhires Kumar Chowdhury, Geriatrician and General Physician and President of NGO Banchbo has been working in the Sundarbans for more than two decades now. According to Dr Chowdhury, saline water majorly impacts the skin leading to fungal lesions and mixed bacteria lesions. He added,

If treated timely, fungal lesions are curable but, if not, it can become chronic and spread to the other parts of the body. When women go for fishing and crab collection, their lower portion is immersed in the water because of which their genitals are affected and genital infections are very common here. It’s not just saline water; after cyclones or storms, dead animals contaminate the water bodies and people here use the same water for everything. 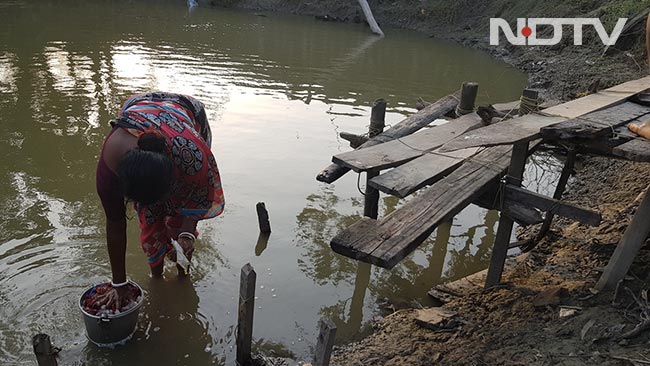 A woman washes clothes in a pond within her house in Sonargaon, Gosaba in Indian Sundarbans

53-year-old Manushree Nayak used to work in a nursing home in Kolkata until she returned to Sundarbans in 2017 to serve the people. Sharing her experience, she said,

7 in 10 patients coming for surgery are women. Among females, major health issues are uterine prolapse, ovarian cyst, and appendix. Among males, cases of Hernia Hidrosis and Prostrate Cancer are more common. Apart from this, worm infestation and ear infections are regular among people because of bathing in the pond.

Shubhankar Banerjee, Founder of NGO Soul which conducts medical camps in the villages of Sundarbans on a regular basis, said,

Most of the people in the Sundarbans face stomach ailments majorly related to digestion and acidity because of the saline water. Anaemia and calcium deficiency is another big health issue that they face- both females and males.

The people of Sundarbans are already living on the fringes. Natural calamities like cyclones which have become more frequent now add to the misery of people. To know the impact of cyclones on the health and nutrition of the people, read part 2 here.

Sundarbans, The Cyclone Capital Of India: The Direct Impact Of Cyclones On Health

Climate Change Impact: Why Are Mangroves Critical For Survival Of Sundarbans?