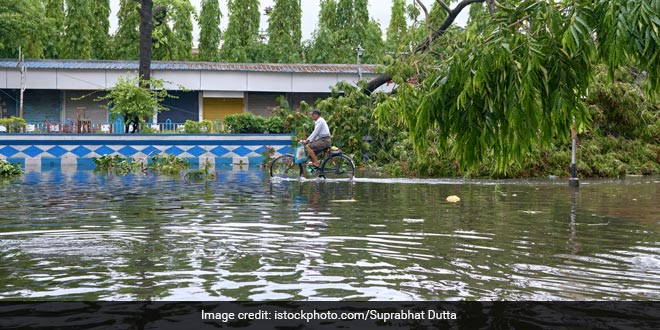 Since 2007, 12 cyclones have hit the Sundarbans region

New Delhi: Of late, Sundarbans is seeing a rise in the frequency of cyclones. Those cyclones might not be intense but they are frequent and strong enough to disrupt the lives and livelihoods of the people of the Sundarbans. The Council on Energy, Environment and Water, a not-for-profit independent policy research institution based in Delhi, states that 15 districts in West Bengal, which are home to nearly 72 million people, are exposed to extreme climate events such as cyclones, floods, and droughts. Districts like Howrah, Kolkata, North 24 Parganas, Paschim Medinipur, and South 24 Parganas are hotspots for cyclones, which have increased five-fold in the state between 1970 and 2019. Storm surges have increased by the same rate during this period. 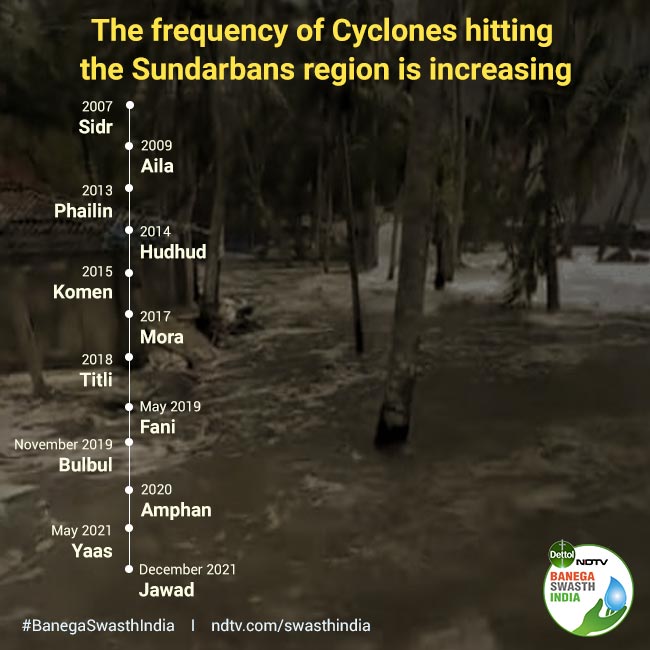 48-year-old Ganga Ghosh from Amlamethi village in Gosaba Block was born and raised in Sundarbans and has seen all kinds of cyclones over the years. While Ms Ghosh’s son has moved to Kolkata to make a living, she continues to live in Sundarbans with her husband, a cancer patient, daughter-in-law and grandchildren. Ms Ghosh has not only seen an increase in the number of cyclones over the years but also an infestation of mosquitoes. She said,

After every storm, we see a rise in the population of mosquitoes. Cases of dysentery, vomiting, fever and other such ailments are also reported. 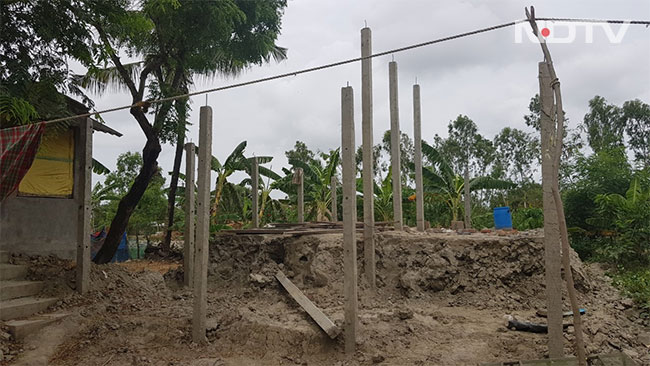 After Cyclone Aila hit the Indian States on the eastern coast on May 25, 2009, Dr Samiran Panda, Additional Director General, ICMR and Head of the Epidemiology and Communicable Diseases and his team conducted a study to examine if Aila was responsible for increased reporting of diarrhoea cases from the district of East-Medinipur in West Bengal. The study titled “Rapid situation and response assessment of diarrhoea outbreak in a coastal district following tropical cyclone AILA in India” was published in the Indian journal of medical research vol. 133(4) in 2011. The risk of diarrhoea in June, 2009 compared to June, 2007 (baseline) was estimated to be 1.6 and 1.3 times higher for the sub-divisions of Haldia and Egra respectively. Vibrio cholerae grew from 54 per cent of the stool samples, confirming a community outbreak of cholera.

Super Cyclonic Storm “Amphan” crossed the West Bengal coast during May 16-21, 2020 as a very severe cyclonic storm across Sundarbans with a maximum sustained wind speed of 155-165 kmph gusting to 185 kmph. It was the first Super Cyclonic Storm (SuCS) over the Bay of Bengal after the Odisha SuCS of 1999 and caused huge devastation, especially in the North and South 24 Parganas. In an interview with NDTV, West Bengal Chief Minister Mamata Banerjee had shared the physical damage caused by the cyclone Amphan and said,

Over 6 crore people, spread across 16 districts out of 23 districts of West Bengal, were directly affected. More than 50 lakh houses and may be 17 lakh hectares of agricultural land totally destroyed. Over 50 lakh farmers lost their livelihoods, 58,000 hectares of water bodies got destroyed killing fishes. 4,200 sq km of Sundarbans, a world heritage site, got severely damaged. Thousand acres of forests, schools, college, substation, power stations, electric poles, ICDS centers and health centers, everything has been destroyed.

The Rising Cyclones And Depleting Access To Nutritious Food

In Indian Sundarbans, people are primarily dependent on agriculture, fishing, and aquaculture including crab, prawn, shrimp seeds collection and honey collection for food and livelihood. 31-year-old Aparna Dhara lives with her husband, two sons (16 and 12-year-old) and in-laws in Lakshmipur village in Kakdwip block. The major source of family income is farming – they grow paddy and some vegetables – they run a small shop and have poultry. For the last year, they have not been able to grow anything because of the saline water. Additionally, since Cyclone Amphan, their house has been destroyed twice.

Because of the frequency of high tides, sometimes water comes into the house like last time we had to run to schools and other fixed structures. We also lost a lot of poultry because they got carried away in the water, said Aparna. 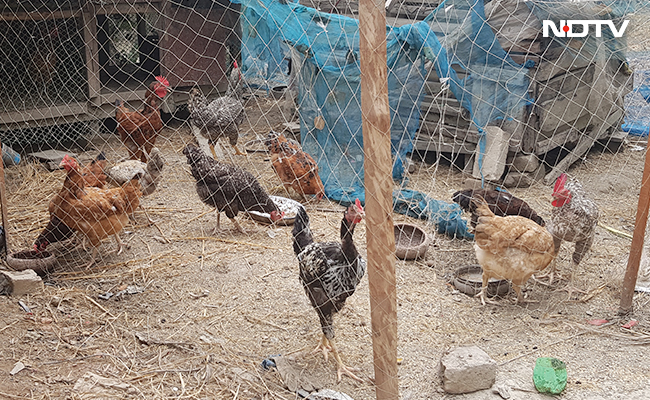 After Cyclone Aila in 2009, Dr Vyas did a study and found that even after a year of the cyclone, 23 per cent of the agricultural land could not be cultivated. As a result, people had to move from agriculture to aquaculture and enter forest areas for their livelihood.

Similarly, 30-year-old Madhumita living in the southern sea face of Sundarbans, in Gobardhanpur village of Patharpratima block, is a paddy farmer and grows vegetables for her six-member family. Every time a storm hits Sundarbans, it takes away Madhumita’s plantation, crop and fish stock.

The majority of the people living in the Sundarbans are economically poor. They eat hand to mouth – whatever they catch or grow is what they eat and also sell in the market. But when a cyclone devastates their house, destroys crops and vegetation and ruins land, how will they cultivate even for their own living? Anaemia and malnutrition, especially among women and children are common here, said Dr Dhires Kumar Chowdhury, Geriatrician and General Physician and President of NGO Banchbo working in the Sundarbans for over two decades.

Kolkata-based NGO Soul works on the ground with children and the Savar tribe in Sundarbans. The organisation conducts medical camps in the villages of Sundarbans on a regular basis. Shubhankar Banerjee, Founder of NGO Soul, said,

During our health camps, we have found that over 90 per cent of children in this area are severely acute malnourished (SAM). Malnutrition is tremendous here. The children may not appear abnormal or sick but as soon as you start their health checkup, you’ll find that their bodies are in dire need of nutrition.

Sudipta Mandal, Block Development Officer, Sagar Development Block, South 24 Parganas informed that people living in Sagar island are majorly dependent on seafood. Almost every household of the 46,000 households in the block has a pond for fisheries which they might not be able to use for commercial purposes but they are able to produce enough for feeding the family. Importantly, fish is a source of nutrition.

If saline water enters ponds because of cyclones, then the balance of the water gets disturbed which can be restored only after a good rainfall. People are still unable to cultivate fish in the ponds damaged by Yaas. They will be able to do so from next year, he said. 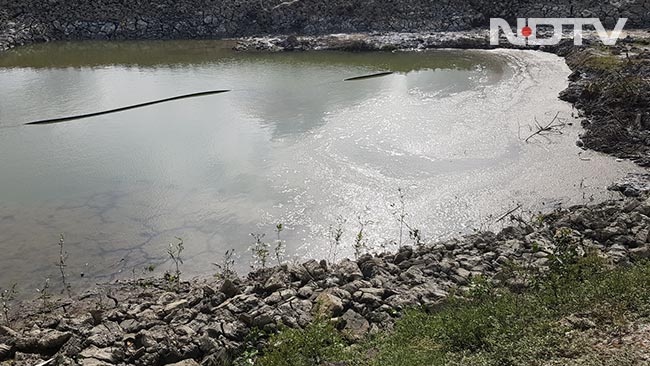 A pond, filled with saline water in Indian Sundarbans

According to a study “Child Health in the Sundarbans: How Far Do Mutually Reinforcing Shocks Act As Contextual Determinants?”, published in the Journal of Health Management, childhood chronic under-nutrition and common childhood illness are highly prevalent in the delta region of the Sundarbans of West Bengal, India.

To understand the level of nutrition among the people of Sundarbans, Dr Samiran Panda suggests referring to the National Family Health Survey-5 data for the South 24 Parganas district, within which a larger share of the Sundarbans is located. Here are some key findings of the NFHS-5 (2019-20):

– The prevalence of malnourished children has increased in the district. 36.7 per cent of the children under five years of age are stunted (low height for age). This is an increase of 9.4 per cent since 2015-16.

– While 32.2 per cent children under five years of age are underweight, 7 per cent are overweight in the district.

With all these tropical cyclones, the residents observe high tides and the saltwater from the sea comes in. It floods not only the banks but also invades ponds and rivers. There is massive destruction not only of fish but also of vegetables that they grow. The population gets negatively impacted due to those natural calamities and that impacts their livelihood drastically. Once you have that sort of situation prevailing, the health of women and children are affected negatively because of disparity and inequity that exists across gender and also for children. Also, sanitary systems like toilets get washed away and that directly affects the health and well-being, said Dr Panda.

The tough terrain and the geographical vulnerability add to the existing challenges of the Sundarbans. In the third part of our story, we take a look at how geography makes it cumbersome for people to access healthcare. Read here.

Geographical Vulnerability, A Make Or Break For Access To Healthcare In Sundarbans