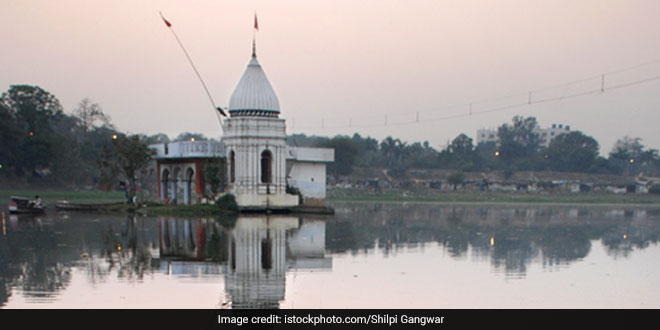 Lucknow: The carpet of water hyacinth over the Gomti River in Lucknow may present a bewitching sight but it also hides the threat to aquatic life that lies in the waters below. A survey carried out by a team of environmentalists has found that the dissolved oxygen (DO) in the Gomti river has dipped to dangerous levels and can no longer sustain aquatic life. The DO level should be at least 8.5 mg/litre to make river water fit for human consumption while a drop below 5 mg /litre makes it unfit for flora and fauna. The DO level of Gomti river water has gone down to 0.5 mg/litre.

According to the study conducted by Professor Venkatesh Dutta and his team, this explains why only eight of the 51 species of fishes are left in the river. Barring water hyacinth, no other plant species have survived the onslaught of pollution.

His findings are similar to those of the Uttar Pradesh Solid Waste Management and Monitoring Committee, a panel constituted by the National Green Tribunal (NGT), which on Monday, advised people against bathing or even boating in Gomti. Professor Dutta said,

The DO level was 5 mg/litre only between Ghaila and Gaughat in the upstream. Thereafter, the water was found to be increasingly poor in quality due to untreated discharge from sewers and drains. The stretch near Shaheed Smarak, Shani Mandir Ghat and Kudiya Ghat is the most polluted, with the DO level being as low as 0.6 mg/litre, 0.5 mg/litre and 0.8 mg/litre, respectively.

The river’s toxicity is so high in places, like Kudiya Ghat, that bubbles are created by emission of harmful gases like methane on the surface.

According to the study, of 675 million litres per day (MLD) of sewage produced in Lucknow, only 396 MLD is treated in treatment plants while the rest flows into the river through 33 big sewers.

As many as 180 small drains also discharge factory effluents and solid waste into the river. The situation is worse every summer when the water level is low.

This time, the problem has been compounded by the fact that 23 of the 26 tributaries of Gomti are running dry.

At present, the water level in the river is around 351.6 feet against a normal of 356 feet. The concrete riverfront has further deteriorated the water quality as it has done away with the natural clay and mud banks that acted like filters.

Professor Dhruvsen Singh of the geology department in the Lucknow University corroborated the study said,

Domestic and industrial wastes are polluting the river. They are also depositing fine sediments that are contaminated. Gomti is a groundwater-fed river and it is not being able to recharge itself.

Professor Singh said the solutions included treating sewage and effluents before discharge, dredging and removal of silt from the riverbed, maintaining the flow through recharge pits and making tributaries pollution-free so that they keep adding fresh water to the river.

Gomti originates from the Gomat Taal in Pilibhit and travels through 960 kilometers to merge into the Ganga near Saidpur in Varanasi.