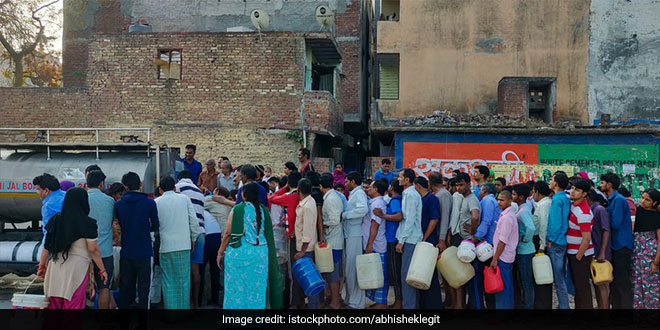 New Delhi: As several parts of the country are facing a serious water crisis, the Delhi government is working to make the national capital self-sufficient in water – instead of perenially depending on neighbouring states. As per official data, Delhi gets 900 Million Gallons Per Day (MGD) water from groundwater as well as rivers Ganga and Yamuna against a total requirement of 1,125 MGD. A government official said on the condition of anonymity,

The government does not want to depend on other states for the city’s water needs. It is working on projects to ensure that water availability in Delhi will be more than its demand in the next few years.

Although the work has started, the projects will take a few years to fructify.

To make Delhi self-sufficient in water, the Arvind Kejriwal government has a three-layer plan which includes constructing underground reservoirs to store flood water, storing rainwater in various places in Delhi to enhance the groundwater level and treating sewage water and storing the water in local ponds. The official said,

The Delhi Jal Board is constructing a reservoir in Palla Yamuna Floodplain for storage of flood water in 1,000 acre area to improve the groundwater level and water sustainability. Consultants are being appointed for the project.

Delhi has a peak requirement of about 1,200 MGD water. During the rains, 6 lakh cusecs of water flows through the Yamuna every day. This is enough water to satisfy Delhi’s needs for an entire year. At the moment we are not utilising this resource. Yamuna’s floodplains are large and porous and we can use this to our advantage to tap into the water that flows in the river during the monsoons.

To recharge the groundwater, the Delhi government last year approved a proposal to rejuvenate 159 water-bodies across the city besides creating two mega lakes at Nilothi and Rohini.

A total of Rs 376 crore was approved for rejuvenation of the 159 lakes and Rs 77 crore to set up two mega lakes.

An additional 106 MGD Drinking Water Treatment Plant in Chandrawal is coming up at a cost of Rs 598 crore with the advanced technology of Ozonation and Activated Carbon to ensure un-interrupted working of plant.

It will treat high ammonia content up to the extent of upto 4 ppm in the Yamuna raw water source.

Earlier, the plant had to be shut down due to the presence of 1 ppm of ammonia in raw water, disrupting supply in Chandni Chowk, Karol Bagh, Civil Lines, Rajender Nagar and nearby areas, the official said.

The Aam Aadmi Party (AAP), which came to power in 2015, had promised to revive Delhi’s water bodies like lakes, ponds and baolis, among others, by rainwater recharging.

To revive the Yamuna, the AAP promised to ensure 100 per cent collection and treatment of sewage through an extensive sewer network and construct new functional sewage treatment plants.

The government was also working to rehabilitate old Sewerage Treatment Plants (STP) and to increase the quality standard of the treated effluent, the official said, adding that work was on. The official added,

The work of laying internal sewer line in the 162 colonies in Palam, Bijwasan, Matiyala, Dwarka, Najafgarh, Mundka, Rithala and Vikaspuri are underway and will be completed in phases by December 2020.

The sewage from these colonies will be taken up for treatment in the STPs at Nilothi, Dwarka, Rithala and Najafgarh.

Uttar Pradesh To Commission 1500 MW Solar Projects By Next Year