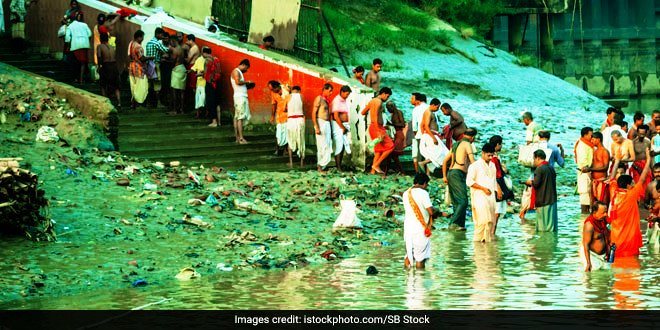 New Delhi: Even a drop of pollution in Ganga is a matter of concern and the attitude of all authorities should be stringent to protect the river, the National Green Tribunal (NGT) has said while seeking concrete action plan on the issue. A bench headed by NGT chairperson Justice Adarsh Kumar Goel pulled up the National Mission for Clean Ganga (NMCG) over its action plan for Uttar Pradesh, Bihar, Jharkhand, and West Bengal and said it does not show concrete plans with prompt timelines and effort in prohibiting pollution.

The NMCG has not filed the precise information about the status of projects planned and executed between Kanpur to Ganga Sagar. Thus, the affidavit of the NMCG is of no assistance. The counsel appearing for the NMCG is not ready and is merely dependent on Praveen Kumar, Director (Technical), NMCG who is also not competent to assist this tribunal. During the interaction, we find his approach to be to help the polluters instead of remedying the pollution which is the mandate of law and the orders of this tribunal.

No counsel is present on behalf of Bihar, Jharkhand and West Bengal. It is the responsibility of all the five states to ensure that water quality at every point meets the standards and if there is a violation, the violators are proceeded against in accordance with the law by way of prosecution, closure of polluting activities and payment of compensation for damage to the environment. We direct Uttarakhand, Bihar, Uttar Pradesh, Jharkhand and West Bengal to place the status of water quality in the respective states on their websites and update the same on a monthly basis indicating fitness of water at various places for drinking or bathing purposes. The Central Pollution Control Board (CPCB) may indicate water quality of the Ganga river at boundaries of the said states on its website.

It said as already directed, flood plains may be duly demarcated; encroachments prohibited and removed, biodiversity parks set up and afforestation undertaken. No amount of wealth generation or commercial or industrial activities can get priority over cleanliness of the Ganga river, it said.

Any individual or establishment violating the environmental norms with respect to the Ganga river must be strictly dealt with under the law and special cells must be created in the concerned states to monitor such action on a daily basis. Such action can be a model to deal with pollution of all other rivers in the country. It is a matter of regret that as per report of the CPCB, 351 river stretches are polluted in the country.

The tribunal noted that it had directed chief secretaries of all the states and Union Territories to monitor this aspect along with other important issues. It said,

Till date, chief secretaries or administrators of 32 states and UTs out of 36 states and UTs have appeared in person. This tribunal has directed highest level monitoring to deal with the situation at the state-level as well as national-level. The Ganga river needs attention at the highest level. We hope that this seriousness will be realised by the concerned states, NMCG and the Ministry of Water Resources and steps will be taken in the right earnestness in compliance of order of this tribunal.

The bench said every time the progress has been found to be unsatisfactory, it will now have no option but to take more stringent measures unless satisfactory remedial action is taken. The matter is listed for next hearing on May 29. The tribunal had earlier said the water of the Ganga River, between Haridwar and Unnao in Uttar Pradesh, was unfit for drinking and bathing, and expressed anguish over the situation. The green panel had said people drank and bathed in the river with reverence, without knowing that it may adversely affect their health.

Water Crisis Returns To Haunt Maharashtra’s Latur, As They Get Water Tanker Once In 15 Days