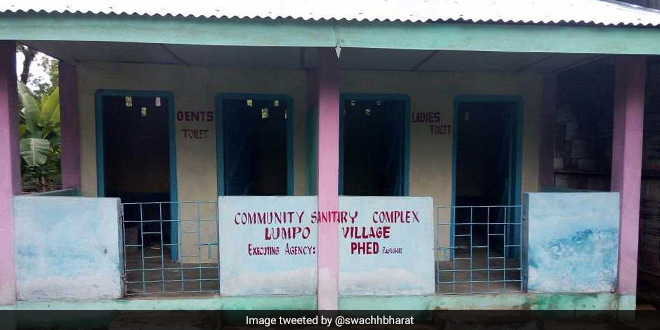 2017 is poised to be a landmark year for the Swachh Bharat Abhiyan, launched three years ago. Adhering to the sanitation mission’s principal objective of eradicating opening defecation from India, as many as 9 states are scheduled to declare their urban areas open defecation free (ODF) by October 2 of this year. While Arunachal Pradesh is keen to join the list but its plans are not to limit its ODF status to just urban areas. The state government is confident that by December 2017, the whole state will become ODF and joint Sikkim as the second north eastern state in India to achieve the ODF tag.

The state government reiterated its commitment to be ODF by the end of this year at an awareness meeting on water and sanitation, organised by the department of Planning and Water and Sanitation, at Bana in East Kameng. At the programme, the state government representative Mayan Kino stated that the government was committed to eradicate the practice of open defecation from all 20 districts of the state and maintained that the progress of toilet construction, as well ensuring the supply of adequate water in the districts was progressing well. The state’s focus on construction of individual household latrines (IHHLs) has ensured that 83.80% of rural areas of Arunachal Pradesh have been able to put a stop to open defecation.

Arunachal Pradesh is wholly committed to the Swachh Bharat Abhiyan and we are confident of achieving the ODF target by December 2017. The progress in rural areas has been especially worthy of high praise and with adequate water supply, the ODF declaration will come soon, said Mayan Kino, Nodal Officer, Swachh Bharat (Gramin), Arunachal Pradesh.

77 per cent of Arunachal Pradesh’s 13,82,611 population lives in rural areas, thereby making the state effectively dominated by rural population. Before 2014, sanitation in the rural areas of the state was in a woeful state. 12 out of the state’s 20 districts had rural sanitation coverage of below 50 per cent. Individual household latrines were low in number. Even water supply was low as only 59 per cent rural households had piped water supply in 2013-14. The beginning of the Swachh Bharat Abhiyan in 2014 however, brought reversal of fortunes for the state’s rural sanitation scenario. 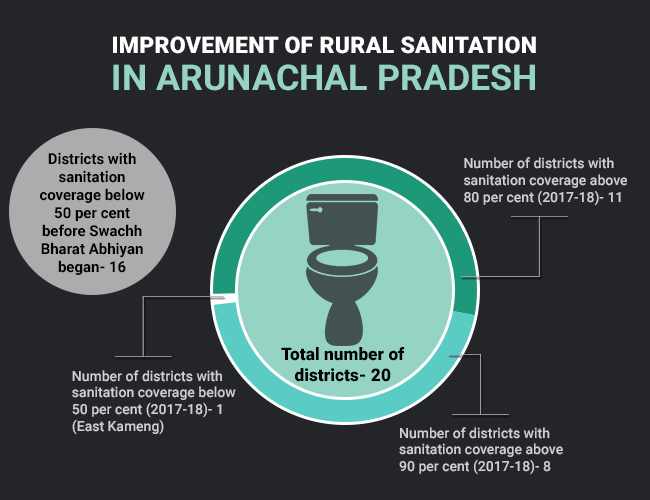 In three years, the rural sanitation scenario has completely changed in Arunachal Pradesh. The reason why we are hopeful of achieving the ODF status is because how rural sanitation and water supply has vastly improved in such a short time period, said Mr Kino.

However, if the state is to go completely ODF by end of 2017, the urban areas of the state, though miniscule in number, also need to go ODF. The major cities of Arunachal Pradesh, Itanagar and Tawang are yet to go ODF, so are the other 27 towns in the state. Only 9 community toilets have been constructed in the state and 1,056 IHHLs in urban areas, which is a low figure, compared to the target of 12,252 set by the Ministry of Urban Development, during the launch of the sanitation mission. The civic bodies are finding it difficult to construct IHHLs in many households as they are citing lack of space across many households, as well as low interest in toilet construction due to high costs.

The amount of Rs 4,000 provided to construct toilets in urban areas is less and people are not much enthusiastic about it, unless there is massive creation of awareness where people bring out money from their own pockets on understanding that lack of toilets can affect health. It is up to the civic bodies to influence and convince people to build toilets in their households. Civic bodies should also provide financial help, wherever possible, in the construction of IHHLs in urban areas, said Taba Tadir, Director, Department of Urban Development and Housing, Arunachal Pradesh.

So the major hurdle for Arunachal Pradesh to go ODF by end of 2017 is the urban areas lagging far behind the rural areas when it comes to toilet construction. Some of the unique problems that exist in urban areas as opposed to rural areas are low awareness among the urban population on the importance of constructing toilets, lack of space in households and the Central Swachh Bharat toilet construction amount not being enough. The state government has directed the municipal bodies to arrange for more awareness programmes and provide financial help wherever possible to tackle these issues and fastrack the toilet building process in urban areas.