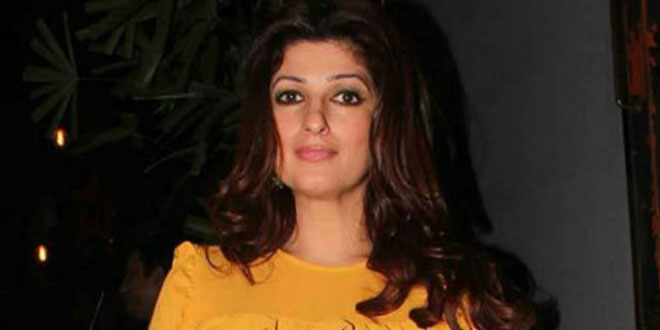 New Delhi: ‘For some strange reason, India has a whopping 12 per cent Goods and Services Tax (GST) on sanitary napkins. This is shocking; apparently there are no taxes on brooms. Maybe they feel that it is important for women to keep the house clean, but, it is not as important as keeping themselves clean,” says Twinkle Khanna in an exclusive interview to BBC World where she talked about 3Ms – Muruganantham (Man known for making low-cost sanitary napkins), Menstrual Hygiene and Menstrual Tax.

Mrs. Funnybones also talked about her recent venture – Padman, the film which she is co-producing,

We talk about women empowerment, but, research shows some 20 per cent of girls drop out of schools as soon as they hit puberty. This shows why India needs to be educated on such a topic. I was researching for my column when I stumbled upon the story of Arunachalam Muruganantham. Immediately after hearing his story, I abandoned my novel and began writing The Sanitary Man.

Talking about why she thought of making a movie, Twinkle added,

Muruganantham’s journey is an important story which should reach every ear and every household. It is a biopic of an entrepreneur Arunachalam Muruganantham, who became a popular figure for inventing low-cost sanitary  napkins and machines. I knew the only way it would truly reach households in both urban and rural India where still menstruation is considered a taboo was by making a movie on the particular subject.

The film stars Akshay Kumar as Padman, Radhika Apte as Padman’s wife, Sonam Kapoor as a person who helps Padman in his venture. The movie is schedule to hit screens on January 26, 2018.

This is not the first time actor Akshay Kumar will be seen on screen advocating hygiene and cleanliness. Earlier this year, his movie Toilet: Ek Prem Katha was centered around the theme of open defecation and the necessity of having a toilet at home. The film was one of the top grossers of 2017  and during the promotion of the film, Akshay Kumar talked extensively on the issue of sanitation and construction of toilets.