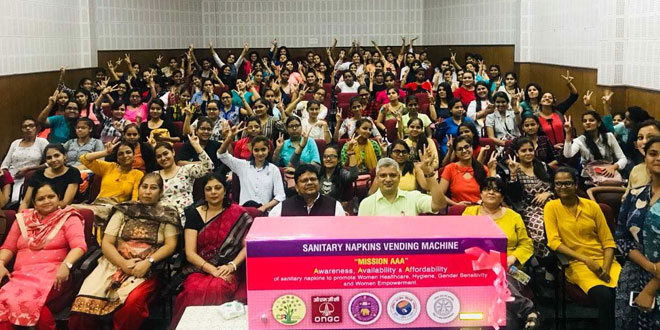 New Delhi: “I am a graduate from Delhi University’s Miranda House, which is a girls college. Unlike schools, in colleges, we don’t have a medical room or a nurse who would have basic first aid including sanitary napkins. Whenever anyone in our class or college would need a sanitary napkin, she would either have to run to everyone in the classroom and ask for it or rush to a nearest medical store and purchase a pack of sanitary napkins. I have seen girls shying about asking for a sanitary napkin even from their classmates. It is then I decided to install a sanitary napkin vending machine in every DU college”, recounts Mahamedhaa Nagar, secretary, Delhi University Students Union (DUSU).

The journey towards installing sanitary napkin vending machines in all DU colleges began back on January 22 when Mahamedhaa organised a women marathon for tax free sanitary napkins. The marathon was flagged off by PadMan actor Akshay Kumar. On the same day, Mahamedhaa made the announcement of setting up sanitary napkin vending machines in all DU colleges. For the same, Mahamedhaa wrote a letter to the Vice Chancellor of DU, who not only welcomed the move, but also circulated the letter to the principals of all the colleges, asking them to take necessary steps.

Before starting the process of installation, I did a small survey. I approached to principals of different colleges and asked what features they are looking for in a sanitary napkin vending machine. Like, Hindu College already had a vending machine, but the problem was the quality of sanitary napkins the machine provided. Lakshmibai College’s principal told me that they are getting everything digital which means any kind of transaction in the college will be digital. Students will get a digital card and will make the payment online. So, she wanted a machine to be incorporated with same kind of mechanism. In the similar way, I collected information, got the machine designed accordingly. 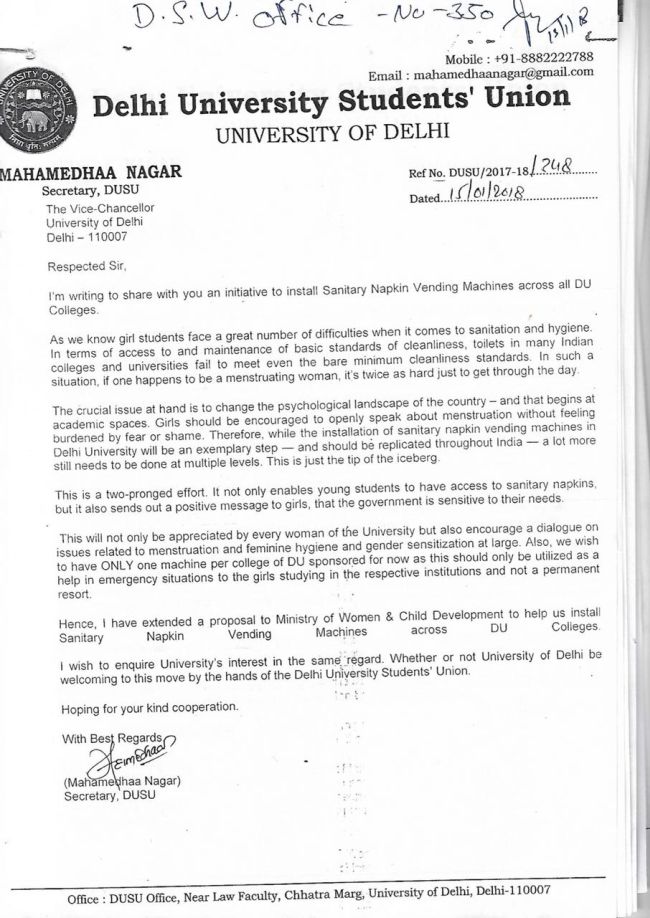 CSR Research Foundation, a non-profit orgnaisation helped Mahamedhaa in getting the sponsors for sanitary napkin vending machines. Costing Rs. 20,000 to Rs. 25,000, a machine can store up to 25 pads. With this, today, Mahamedhaa has installed 56 sanitary napkin vending machines in 56 different DU colleges, including the off campus ones like Aditi Mahavidyalaya in Bawana and some which are not affiliated to DUSU.

Using a sanitary napkin vending machine is no rocket science. A girl requiring sanitary pad needs to put a Rs. 5 coin in the machine and a pad comes out of the machine. Though the machines are installed for free, it is the college which needs to maintain it and ensure it has ample stock. The money collected by selling pads will be utillised to buy another set of stock of sanitary napkins. 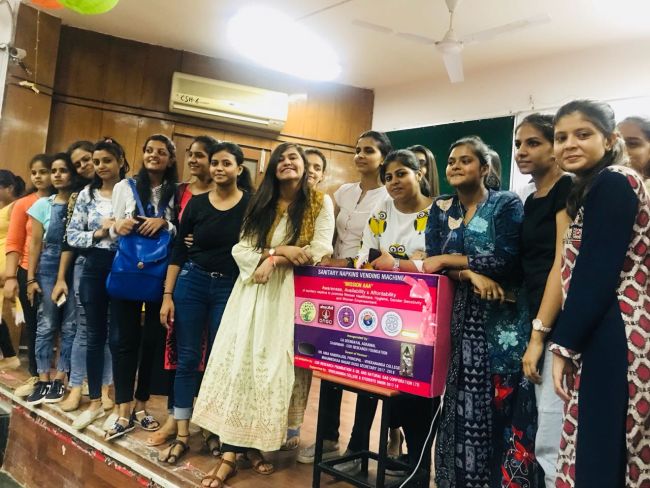 The pad warrior, Mahamedhaa signs off by sharing her future plans,

To encourage colleges to come forward and join hands with us in ensuring safe sanitation, we are taking the responsibility of maintenance for first year. After that colleges will need to maintain the machines. Now I plan to install sanitary napkin incinerators in all DU colleges. The vatavaran society of Miranda house is doing a research on how environment friendly are these incinerators. Once it is done, I’ll escalate the proposal.

64 Per Cent Of Air Pollution In Delhi During Winters Is Caused By External Factors, Says Study