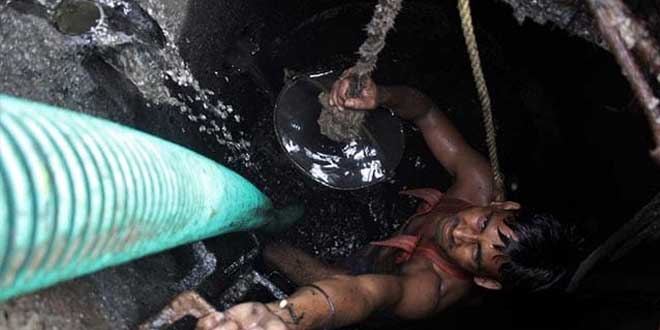 Vadodara: Taking serious note of the death of seven people while cleaning a hotel sewer in Gujarat, the National Commission for Safai Karamcharis (NCSK) has urged governments of all states to introduce mechanised cleaning of underground drain pipes and septic tanks. Last week, seven persons, including four sanitation workers, died of suffocation while cleaning sewer of a hotel in Dabhoi tehsil of Vadodara district. Three employees of the hotel were also among those killed.

NCSK chairperson Manhar Zala, who met family members of the seven victims on Wednesday, urged all state governments to introduce mechanised cleaning of sewers to prevent such mishaps. Talking to PTI, he expressed concern over the appalling conditions in which the victims had to work. He pointed out,

All the seven men last week entered the septic tank without any safety gear.

Urging all states to ban manual scavenging, he said,

The commission has taken a serious note of several such deaths in the country during the cleaning of sewers. Our suggestion of mechanised cleaning was earlier implemented by the Delhi government.

Most of the sanitation workers are into the profession since generations and find it difficult to get other jobs, he noted. Mr. Zala said,

Prime Minister Narendra Modi has also often spoken about improving the lives of sanitation workers. This way, they will get self-employed. They may be called entrepreneurs, a status that will help them economically. It will also ensure their safety and give them dignity.