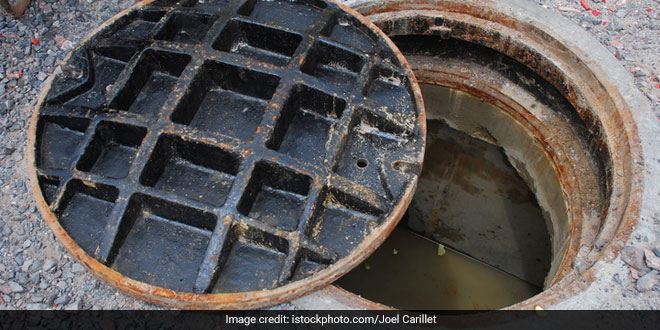 New Delhi: In a symbolic move in February this year, Prime Minister Narendra Modi washed the feet of five sanitation workers as a mark of respect for their efforts to maintain cleanliness at Kumbh Mela between January and March. The Prime Minister has often spoken at length about improving the lives of sanitation workers in India and has even donated Rs 21 lakh from his personal savings to the corpus fund for the welfare of those who toiled at the Kumbh Mela. But the issue of sanitation workers, especially those engaged in manual scavenging remains an area of concern.

On Saturday (June 15), in Vadodara district of Gujarat, seven individuals – three employees of the hotel and four sanitation workers, died after inhaling toxic fumes while cleaning the sewer of a hotel. According to the police, the incident took place around 12:30 am at Darshan Hotel in Fartikui village of Dabhoi tehsil, around 30 km from Vadodara city.

The sanitation workers had been roped in to clean the sewer. When one worker failed to come out of the manhole, others went inside to check, but all of them died of asphyxiation, in-charge district collector Kiran Zaveri told PTI.

“We rushed to the site soon after learning about the incident and teams of the fire brigade from Vadodara Municipal Corporation and Dabhoi civic body launched rescue work. They took out the bodies of the deceased after three hours of efforts,” Kiran Zaveri added.

The four sanitation workers had been called in from Thuvavi in Dabhoi for the job.

While a case has been registered at the Dabhoi Police station, the hotel owner is absconding. Meanwhile, the state government has announced financial assistance of Rs. 4 lakh each to the kin of deceased.

Angry Reactions Come In On Social Media Against Manual Scavenging

Sharing the news, Anand Mahindra, Mahindra Group Chairman, raised questions over death of people while cleaning sewers and lack of adoption of sewer cleaning machines like Bandicoot – a pneumatic semi-robotic device used to clean sewers. He offered monetary help, if it is the lack of funds that is stopping individuals and government to make the right switch.

Enough. Enough of this debasement of human life. I had tweeted about an automated scavenging machine—the Bandicoot—developed by young students and many others have also been designed. What’s preventing their widespread adoption? If funding’s needed to produce in scale, count me in.

Actor and Swachh Bharat Abhiyan ambassador Amitabh Bachchan too was disheartened with the plight of sanitation workers. To stop the sanitation workers from physically entering the sewer pits and doing away with the practice of manual scavenging. Mr Bachchan referred to the 25 small sewer cleaning machines and one truck machine that he had donated to the Municipal Corporation of Greater Mumbai, in November last year for cleaning sewers.

He shared, “Anand .. I had gifted 25 machines to BMC and a Truck to them .. the machines were given to individuals, the truck to BMC .. a Company in Aurangabad makes them .. never publicised it because that is not the reason for the gift .. its horrifying to learn of this day in and day out”

Anand .. I had gifted 25 machines to BMC and a Truck to them .. the machines were given to individuals, the truck to BMC .. a Company in Aurangabad makes them .. never publicised it because that is not the reason for the gift .. its horrifying to learn of this day in and day out https://t.co/Vrh5nIOQjc

Bezwada Wilson, Founder of Safai Karmachari Andolan, called the incident a shameful one and demanded justice from the Prime Minister for these deaths.

#shameforcountry 7 indians killed in septic tank in Gujarat. PM should give answer for these killings, we demand justice #StopKillingUshttps://t.co/o6ejuPP90c

Many voiced the need for solid action, relevant gears, and an end to this illegal and inhuman practice.

While we work towards #SwachhBharat, can we also focus upon improving the inhuman and dangerous conditions #SanitationWorker have to live through everyday? #Manualscavenging needs to stop! @swachhbharat @PMOIndia https://t.co/w5VYhYWFp6

The practice of manual scavenging as per the Prohibition of Employment as Manual Scavengers and their Rehabilitation Act, 2013 is referred to as “manually or barehanded cleaning, carrying, disposing of, or otherwise handling in any manner, human excreta from the insanitary latrines”.

Despite being an illegal activity since 1993, scores of sanitation workers are involved in it and die every year from suffocation while removing waste from underground drains. As many as 801 sanitation workers have died while cleaning sewers in the country since 1993, stated Manhar Valjibhai Zala, chairperson, National Commission for Safai Karamcharis (NCSK). He also noted that though manual scavenging had been stopped in many states, including Himachal Pradesh, 34,859 manual scavengers still existed in other states, including Tamil Nadu and Uttar Pradesh.

1,920 sewers cleaners have suffocated to death in the country since 1993. Also, as per our estimates, 1,20,000 individuals are still involved in the practice of cleaning sewers and toilets manually, said, Bezwada Wilson, Founder of Safai Karmachari Andolan, a group campaigning to eliminate manual scavenging.

Concerned About The Water Crisis, PM Narendra Modi Writes Letter To All Village Pradhans Asking Them To Conserve Rainwater