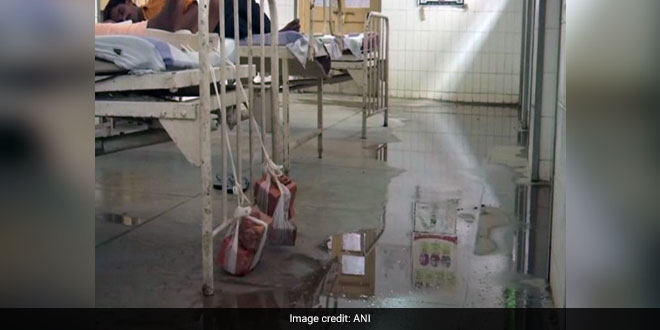 New Delhi: Lack of basic medical facilities and poor sanitation conditions in the government hospitals across few states have added to the adversities of ailing patients, as per a reality check operation conducted in these hospitals by ANI. In Uttar Pradesh, Moradabad district hospital in Moradabad and Ursala Hospital in Kanpur lack sanitation and cleanliness, due to which the patients and attendants have to go through a lot of disquiet. A patient at Moradabad district hospital told ANI,

Sanitation workers do not change the bed sheets, patients have to sleep on dirty and stained sheets. They clean the room once in every two or three days and charge every patient for cleaning their room.

On the other hand, patients and attendants at Ursala Hospital in Kanpur have to bear the brunt of lack of basic medical facilities and sanitation. Ursala Hospital is one of the largest government hospitals in Kanpur.

The hospital lacks basic medical facilities like ambulance, stretcher and wheelchair. Attendants themselves have to drag the patients to reach the hospital ward or parking area. Due to a shortage of doctors, patients wait for hours in order to get proper treatment.

On the other hand, in Netaji Subhash Chandra Bose District Hospital in Gorakhpur, patients are forced to sleep on wet floors due to water leakage from washrooms, and authorities do not even keep a check on them.

In Punjab, poor facilities and unhygienic conditions with piles of garbage and filth are seen inside the premises of Guru Nanak Government Hospital in Amritsar. Patients sit on the ward floors due to broken beds and stretchers. Attendants spit all around the hospital premises, creating an unhealthy environment for the suffering patients.

Also Read: From A Luxury To Suffocating, Here Are Some Unusual Myths Regarding Toilets Debunked

Amid Acute Encephalitis Syndrome (AES) outbreak in Bihar’s Muzaffarpur, hospitals in Ranchi have been issued a general advisory to keep cleanliness to prepare for any eventuality and immediately report any suspected cases of the fever on Wednesday. Ranchi Chief Medical Officer and Civil Surgeon Vijay Bihari Prasad told ANI,

We are about to run a 3-day mass fever survey campaign. Under this campaign, we will answer AES (Chamki fever) related questions and bring patients with similar symptoms to hospitals for further checkup and treatment.

As many as 112 children have died of AES in Bihar’s Muzaffarpur district so far. Patients in Bowring and Lady Curzon Hospital in Bangalore suffer due to a shortage of medical supply and inadequate medical facilities.