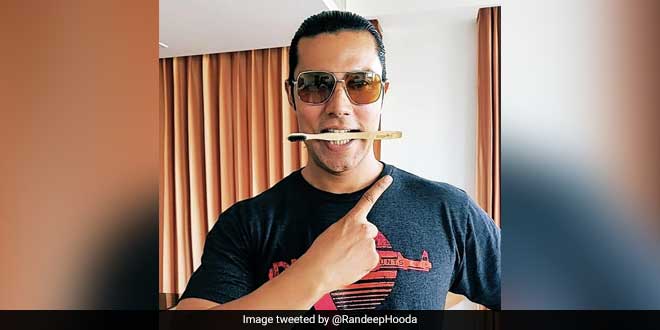 New Delhi: We start and end our day with plastic. Think about it. From brushing your teeth in the morning to water bottles, from lunch box we pack for the day to laptop we work on, each and everything we use on a daily basis is made of plastic. So integral is hazardous plastic in our lives that we cannot take on the battle of tackling humongous problem of plastic waste, till we make lifestyle choices, says actor Randeep Hooda.

On February 3, actor Randeep Hooda, posted a photo on his social media with a bamboo toothbrush in his mouth and captioned it “Want to do something for the environment? Always look out for lifestyle choices to make a larger impact. Found this bamboo toothbrush (1=4 plastic). If we shifted to these, there will be tonnes of less plastic floating around. Great idea!!”

He further added, “If you are desi, use neem twig”.

The reason we need to take a cue from actor Randeep Hooda is the fact, each year, at least 8 million tonnes of plastic end up in the oceans, which is equivalent to a full garbage truck every minute. Plastic also makes up 10 per cent of all of the waste we generate in the world.

How Bamboo Toothbrush Is Better Than Plastic

The bamboo toothbrush actor is promoting is from ‘Purganics’, a brand providing plastic free organic products. While the handle is made of bamboo, which is 100 per cent biodegradable, bristles are made out of Dupont Nylon 6 – which is a faster degradable form of nylon as compared to the other lower nylon grades, claims Purganics. The reason bamboo is being considered as a plausible alternative to plastic is because bamboo is the fastest growing grass on earth. Also, bamboo is naturally antibacterial which completely avoids the use of fertilisers or pesticides during its cultivation.

So, are you ready to make the switch to plastic-free life?