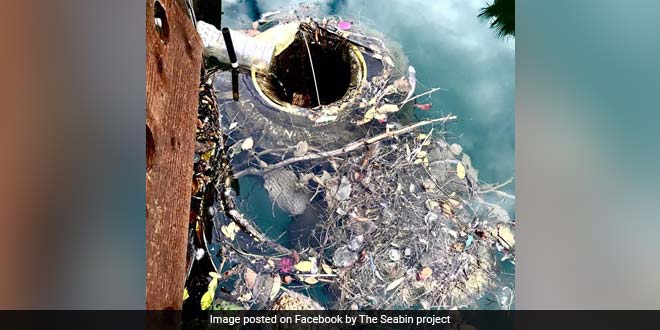 New Delhi: Each year, over 8 million tonnes of plastic waste ends up in the oceans across the globe, wreaking havoc on marine ecosystems, warned United Nations (UN). A few months ago, a marine wildlife photographer takes a photograph, of a tiny seahorse holding tightly onto a cotton swab, which presented the fact that we are drowning the oceans in plastic and not even paying much attention to it. The floating waste (plastic debris and microplastics) is found everywhere, even on the remotest shores of uninhabited islands, in the Arctic ice, the deep ocean and in a broad array of marine organisms. According to some estimates by UN, the rate at which we are dumping discarded trash (single use plastic) into oceans, by 2050 oceans will carry more plastic than fish. But what can be done to have pollution free oceans for our future generations? An Australian company has a solution to deal with marine litter, one port at a time – a pair of surfers from Perth, Australia, have invented a Seabin, which is a floating natural fiber garbage bin that can suck in pollutants in docks, marinas, yacht clubs or any water body with a calm environment and leave the water pristine. Essentially, it can stop waste from leaving marinas and harbours.

Speaking about what can the Seabin catch, it can grab hold of everything floating in the water from plastic bottles to paper, oil, fuel and detergent, 24 hours a day, seven days a week, 365 days a year. Also, it can hold an estimated 1.5 kg of floating debris per day (depending on weather and debris volumes) including micro plastics up to 2 mm small and micro fibers as well with a small adaptation to the standard Seabin filter. According to the inventors, removal of the larger micro plastic particles actually prevents them from splitting and creating more micro plastics in the water body.

The Seabin, which cost around $3,825 and can operate 24 hours a day, works on a very simple technology – water is sucked in from the surface and passes through a catch bag inside the Seabin, with a submersible water pump capable of displacing 25,000 Lph (liters per hour), plugged directly into 110/220 V outlet. The water is then pumped back into the marina leaving litter and debris trapped in the catch bag.

It is recommended that Seabin should be installed in a specific area in the marina or on a floating dock where there is a debris problem. Importantly, the strategic positioning will enable the wind and the currents to push the debris directly to the Seabin.

Furthermore, the maintenance of Seabin is not that complicated as well. The catch bag can hold up to 20 kg debris and it is advised to be checked twice a day and emptied as needed. The manufacturer recommends that Seabin should be cleaned at least once per month and should also be checked regularly.

The ultimate goal of the inventors is to make Seabins from the plastic caught by other Seabins, resulting in a positive domino effect.

Also Read: Say No To Plastic: Here Are 5 Simple Ways To Cut Down Plastic Usage

An Alternative To Plastic Tableware, Which Is Made From Sugarcane Waste And Can Biodegrade Itself Into Manure