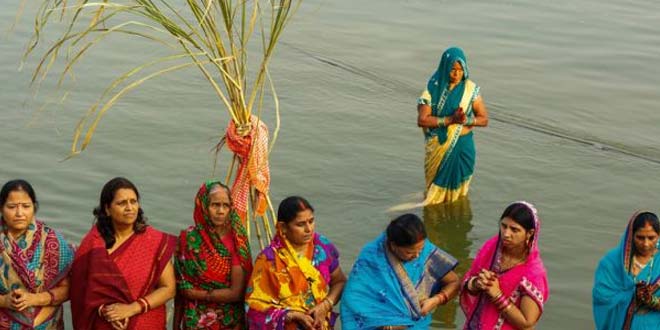 New Delhi: With the end of Diwali celebrations comes ‘Chhath Puja’ which is celebrated with huge fervour in Bihar, Chhattisgarh, Jharkhand, Uttar Pradesh, Delhi, and West Bengal. As the rituals for ‘Chhath Puja’ are mostly performed on ‘ghats’ or banks of rivers, the festival takes a huge environmental toll on these water bodies. This is because the materials from ceremonies like oil, flowers, plastic plates, coconut, and incense sticks among others are often disposed of directly into the rivers, adding to the severe depletion in water quality in already ailing the river. In a bid to tackle this and reduce the pressure on the already dying Mahananda river, local people and the civic authorities in Siliguri prepared about 125 artificial ghats for devotees observing the four-day Chhath Puja. While talking to NDTV about the drive to reduce water pollution during Chhath celebrations, Asok Narayan Bhattacharya, Mayor of Siliguri Municipal Corporation (SMC) said,

The National Green Tribunal (NGT) had last year directed that all kinds of puja celebrations must be stopped in the natural water bodies like rivers and thus the District Magistrate and the Municipal Corporation has taken a decision to impose a ban on performing rituals in the river Mahananda. We have been asked to inform all Chhath Puja Organising Committees to ensure that the rituals take place only in artificial ponds. As of now, all the 80 puja committees are complying with the direction and if in case any violation is found, appropriate measures will be taken which will be decided by the DM’s office.

Further directions from the district administration to the Puja organising committees included, no construction allowed on the river bank, the river bed cannot be dug up, the course of the river cannot be altered, earth-cutting and moving machines can’t be used in river beds without permission and such machines can be used only for cleaning purposes.

The artificial ponds were prepared using mud and water which will be secured by putting a large sheet of plastic at the bottom and once the rituals are completed, the sheet will be removed, allowing the water to seep underground. The ponds were readied with concrete steps to make it like ‘river ghats’ for the devotees to perform ghat rituals that were scheduled to be performed between Saturday evening and Sunday morning.

According to Councillor Rita Oraon, every year, more than a lakh people celebrate Chhath in Siliguri which is the second biggest celebration after Patna. She informed that the artificial ghat made in the Gandhi Maidan was a huge hit as it received a large number of devotees who lit earthen lamps and enjoyed the puja ceremonies. She further said,

With a huge number of people gathering during the festivities, it is not only the materials used during the ceremonies that generate waste but also the other items being carried by people like polythene carry bags, and wrappers of eatables. The idea behind building artificial ponds is to keep this waste from entering the river Mahananda.

However, Ms. Oraon said that in her ward, she found people going to the river and not to the artificial pond for offering prayers during Chhath rituals. She said,

There were some instances where locals went to the river Mahananda. This is because of the faith that they have been practising for many decades and the practice being carried out by their parents and their forefathers involves offering prayers to the rising Sun by stepping inside the river at least knee-deep. And so a complete change cannot be expected so soon. It will take time to change bring a behaviour change in the people.

Appreciating the initiative undertaken by the civic body, Arunanshu Sharma, a citizen of Siliguri and founder of a campaign ‘Mahananda Bachao Abhiyan’ (Save Mahananda Campaign) to revive the dying Mahananda river said that the river that originates from the Himalayas in Darjeeling district and descends to the plains in Siliguri can be best described as the dumping ground for city dwellers and so not allowing it to be damaged further by religious ceremonies is a positive step. He said,

Every year, thousands of devotees float earthen lamps in the water, pour oil and put flowers and fruits in the river which affects its ecosystem. Some artificial ghats were made last years as well but this year we can see that more people are choosing to perform rituals in the artificial ponds and the number of ghats is also higher than the last time.

He said that police and monitoring teams comprising civil defence volunteers could be seen surveying the celebrations looking for people flouting the directions and a few earthmoving machines were seized by them that were being employed to build ghats in the river Mahananada.

Celebrated in Bihar, Chhattisgarh, Jharkhand, Uttar Pradesh, Delhi, and West Bengal, Chhath Puja is a festival that is dedicated to the Sun. As the sun rays are considered to be a source of life on the Earth. The first sun ray is called Usha and last sun ray is called Pratyusha. Both these sun rays are considered auspicious and worshipped during Chhath Puja.

Chhath is a four-day festival. This year it was celebrated from October 31 to November 3. On Chhath Puja, women perform the Morning Prayer by standing in a water body and offering water to the Sun and Hindu Goddess Chhathi Maiyya. The Chhath Puja rituals and practices involve ‘Nahay Khay’ (bath and eat) on the first day where the devotees take a dip in the river. This is followed by ‘Lohanda and Kharna’ on the second day when the devotees keep fast for the whole day after the worship of Sun and break their fast in the evening after sunset, ‘Sandhya Argh’ on the third day on which the devotees prepare ‘prasad’ (offerings) at home and offer the same to the setting sun at the back of a water body, and on the fourth and final day, it is ‘Suryodaya’ when the devotees along with family and friends, go to the riverbank before sunrise, to make pray to the rising sun.

Universal Coverage Or Immunisation For All Is Still A Long Wait

#BeatPlasticPollution: Indore Introduces ‘Thaila Bank’ To Phase Out The Use Of Single-use Plastic Bags