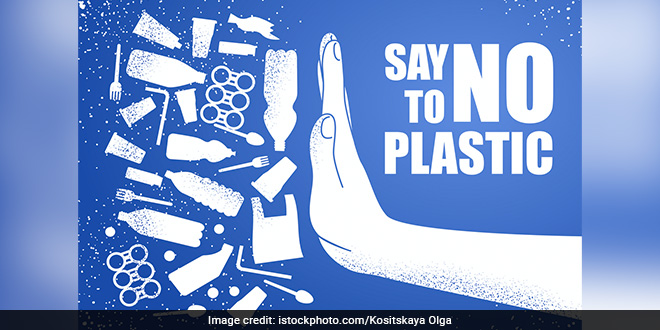 Single-use-plastic ban - What it means for India, what will be the challenges on the road ahead

New Delhi: In a move that could have significant impact in checking plastic pollution, India banned the use of ‘single-use plastic’ from July 1, 2022. The Ministry for Environment, Forest and Climate Change had issued the notification last year in August announcing a ban on single-use plastic effective from July 2022, items like Balloon sticks; Cigarette packs; Cutlery items including plates, cups, glasses, forks, spoons, knives, trays; Earbuds; Sweet boxes to name a few have been banned. Team Banega Swasth India speaks with Atin Biswas, Pragramme Director – Municipal Solid Waste from Centre For Science And Environment (CSE) about this ban, what it means for India, what will be the challenges on the road ahead. Here’s what we discussed:

NDTV: Centre has announced a single-use-plastic ban on some items. Is this the way ahead for India’s journey to manage plastic menace?

Atin Biswas: We are little late on this ban, but it is a great beginning. This single-use-plastic ban list covers a lot of waste streams. Though, I had expected that the government would have included the multi-layer plastic packaging in this list but unfortunately that has not been covered. It should have been included but nonetheless, it is a great start. Going forward, we have to see how well it is enforced on ground.

NDTV: Will this plastic ban in India make any difference or will it be like previous bans where enforcement has been an issue? According to you, what are some of the challenges with such types of bans?

Atin Biswas: There have been plastic bans in the past as well. As many as 25 Indian states had banned plastic previously with some form of state notification within their own jurisdictions. But all these bans had a very limited impact on ground. Now, if this ban is genuinely enforced, I think it will have an impact. But the problem is that there is no overall strategy. Basically, this notification means that there is a law which will prohibit certain items for production, sale and consumptions. The enforcement of the ban has been left with the local authorities and municipal bodies. I am a little skeptical about that as I don’t know how much local authorities will be able to do alone as there is no holistic approach towards the ban. My worry is that, as a consumer, one might get these items somewhere in the market like we have seen in past as well. Another challenge of the notification is that this list contains majority of items that are not really branded, so you don’t really know who is making these items and who to hold accountable.

NDTV: How prepared do you think industries are in enforcing this single-use plastic ban in India?

Atin Biswas: This ban was notified last year in August, so ample time has been given. Currently, we have banned only 10% or 20% of plastic items that should have been banned. We have spent almost the year; we knew this ban was coming. The question really is have we done enough to educate all the stakeholders about this ban. The biggest of all is the consumer. I haven’t seen any advertisements, newspaper or TV commercials or something on social media on this ban that will help inform people about this ban taking place in the country. We have to adopt an inclusive approach otherwise enforcement will be very difficult. We are talking about environment, global warming, climate change – these are non-negotiable. Companies need to invest and do research in finding more sustainable alternatives to these banned products. It is no more a question of finding alternatives, industries will have to spend money in research and development and find sustainable alternatives.

NDTV: How can the issue of proper enforcement and alternatives be tackled by the government?

Atin Biswas: Plastic was an incidental invention; we were kind of experimenting with things when we invented plastic and since then it has become a major part of our lives. Today, we are living in a time, when we have started actually breathing, eating plastic. We are actually living a life full of plastic items. There have been many global studies that suggest that we have been ingesting 5 grams of plastic every year. And we all know what plastic is made of, so it is putting us all in tremendous health hazards. We have come at a stage, where 10-12 years down the line, we might even see another pandemic just because micro plastics are being found in our blood. Government cannot succeed until unless the approach is inclusive. We have to understand that beating plastic pollution is simply not government’s responsibility – it is the responsibility of industries, brands, manufacturers and most importantly the consumers.

NDTV: Why it is so difficult to get greener and more sustainable alternatives to plastic at the similar cost?

Atin Biswas: Finding an alternative to plastic is not easy, but it is necessary to find solutions. We have got ourselves in a situation where a decision to ban plastic items is non-negotiable. The decision to ban plastic items is a very timely, I wish, It would have come few years back, still, it is a good start. Everyone will have to focus on finding green alternatives. There are sustainable options available in the market like compostable and bio-degradable plastic. We need specific facilities to recycle these greener alternatives of plastic and government should look upon this and start educating the masses, so that the consumer is well informed.

NDTV: Your message for consumers to make this plastic ban effective in India

Atin Biswas: We all need to follow the 3Rs – Reduce, Reuse and Recycle. In our waste composition – more than half of the waste is food or kitchen waste. In this kitchen waste 70% is water. So, when we compost water evaporates and leaves behind the substitutes, which can be used for gardening purposes. Today, we spend million and billions of rupees on transporting and dumping the food waste. What Kerala has done that they have successfully introduced home composting. Today, there are more than 20,000 households in the city of Thiruvananthapuram that are following the practice of composting, which means they are reducing the waste at source and the municipality is free from the burden of managing so much waste. If you speak in numbers, nearly 200 tonnes of waste every day is saved for 365 days a year in that city – Imagine so much money and resources that they are saving just by following this simple rule – Reduce. The problem is that we start only thinking about managing waste, when we are already sitting on a waste mountain. We don’t think of solutions or situations and think of strategies that will help building a scenario wherein these waste mountains will not exist. It is the awareness and multi-stakeholders approach that India needs to focus on.