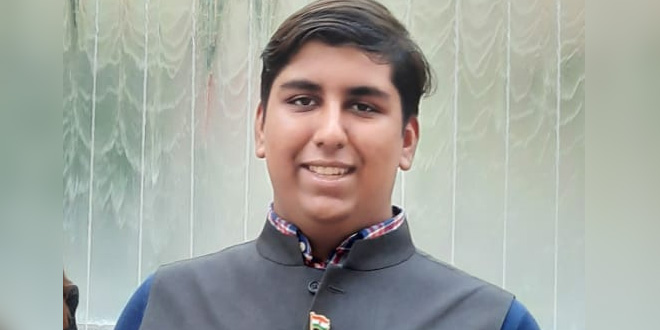 We need to stop deforestation and use afforestation together: Aditya Mukarji

New Delhi: “I cannot wait and watch. I wanted to do my bit to help make a difference. I want all of us to do our bit, in our daily life, to help bring about a positive impact on our environment,” says Aditya Mukarji a Youth Environmentalist and one of the 17 Young Climate Leaders for the UN India Campaign ‘We The Change.’ Unlike a regular teenager, Aditya embraced the larger cause of tackling a critical issue facing the world at the age of 13. While he was in class 9 at The Shri Ram School Aravali, Gurgaon, he had taken up the challenge of replacing 50,000 plastic straws with eco-friendly straws by World Environment Day 2018. He also started interning with the Delhi-based NGO Chintan, as their youngest intern. With his relentless efforts, he managed to achieve his goal before the deadline. Today, four years later, he has continued the efforts to tackle the issue of plastic pollution and waste management, undeterred. Aditya talks to Team Banega Swasth India and discusses his latest initiatives and his journey as the UN’s young climate leader.

NDTV: At the age of 13, you started a battle against plastic straws by replacing them with eco-friendly straws. You have helped remove approximately 26 million plastic straws and a few million other single-use plastics. Tell us about your initiative and how did it all start?

Aditya Mukarji: It started very simple in 2018, at the age of 14, I was going through my social media and came across this very disturbing video of a doctor trying to pull out a plastic straw out of a turtles nose. The crying and bleeding of the turtle really impacted me and made me feel guilty for human actions, which we take without thinking of the consequences for other living forms. I began reading about the problems of plastic pollution and waste disposal and that’s when I realised that it is a major problem. The oceans and landmasses are littered with plastics and these don’t biodegrade. I spoke to my mentor, Ms Bharti Chatturvedi of Chintan, who told me about the problems of waste management and waste pickers. That’s when I came up with the idea of tackling the problem of plastic pollution at the source, that is eradication of single-use plastics in the hospitality industry at its source. She really supported my idea and efforts, which were very simple, to not offer a straw at all. And if the customer demands it, offer them an eco-friendly alternative. This came about with a simple approach – I highlighted the problem, I gave them the solution, and told them how it is beneficial for them. In my opinion, any action or movement should be in connection with the needs and wants of everyone.

NDTV: At the age of 18, you are one of the 17 Young Climate Leaders for the UN India Campaign, ‘We The Change’. How big is this responsibility and how do you plan to steer climate action movement in India?

Aditya Mukarji: it is a very major responsibility because UN has made us the face of youth climate action and has tasked us with the promotion of action in India as well as motivating other youth to take up climate action. I personally have engaged in youth engagement and the promotion of climate action at the grassroots level. In my opinion, no social movement or climate action movement can be truly successful unless the change is not started at the grassroots level of society. And this is where I want to change the use and throw mentality of the people, make them environmentally friendly and reconnect them with their roots and heritage by taking simple and small steps. I want to ensure that the climate action movement is not done by mere statistics but by the quality of the statistics and change brought on the ground level.

NDTV: In July 2020, you started a campaign “Forests of Hope” – an urban forestry initiative to grow 195 native/ fruit trees for the children of the 195 nations of the world. Tell us about this initiative and its challenges given there are concerns about how successful these plantation drives are to ensure the survival of the trees planted.

Aditya Mukarji: It is a global project – Forest Of Hope – which includes efforts to grow one tree for children and youth of every country, so 195 trees the main aim being t grow native and fruit-bearing trees because they are easiest to grow and nurture. Tree plantation campaigns do not have to be to just plant trees but has to take care of and nurture them for the highest survival rate possible. For this, I partnered with various institutions within India and outside to ensure they are taken care of at least for 3 years so that they can have a chance for survival and if the saplings die, they can be replaced with new ones. We were able to plant over 45 such forests which are approximately 9,000 trees. The aim was that since the world is racing to reduce carbon footprints, we as individuals and organisations also need to bring in a change in our lifestyle and local environment and this is done through a simple thing of urban forestry for the pure purpose of economic development. The program is an independent effort to spread the message of hopeful tomorrow to the children of today. Survival can only be done if you bring back the native species.

NDTV: How effective do you think tree plantation is in terms of the sheer scale of the problems, in terms of emissions and pollution we are dealing with?

Aditya Mukarji: Afforestation can be an effective measure under very few circumstances such as nurturing trees and planting native species and it can’t be done after deforestation and tree felling. Even 100 saplings can never make up to a mature tree in terms of reducing carbon emissions. We need to stop deforestation and use afforestation together. Municipal and local bodies can easily take up these plantations and nurturing activities because they have the resources to do so, and they can also help spread awareness among people. Even if people plant one or two saplings in their home garden, it still brings about a major change somewhere down the line.

NDTV: You believe in individual social responsibility, and you also say that “refuse if you cannot reuse, to leave the world a little better than you found it”. What kind of actions do you take in your daily life to stick to this goal?

Aditya Mukarji: I take very simple and small steps such as I don’t use single-use plastics, I carry my own water bottle when I am going out, carry a metal straw with me in case I go to a coffee shop. If I am going to Starbucks or CCD, I either use their ceramic mugs or use my own travel mug to avoid their plastic cups. If I am going grocery shopping, I always take my own jute bag, even if I get an eco-friendly bag at the store, I refuse it because it might not be useful for me later on. When I used to go to school I used to carry steel tiffins and water bottles, I use bamboo toothbrushes, and shampoo bars, and most importantly I use public transport whenever and wherever possible. The other thing is the segregation of waste into seven categories – wet, dry, paper, metal, plastic, e-waste, and medical waste. We compost the wet waste in the colony and give my plastic waste to a proper vendor to ensure it is actually recycled. Even though recycling is not the best way, it is better than ending up in landfills.