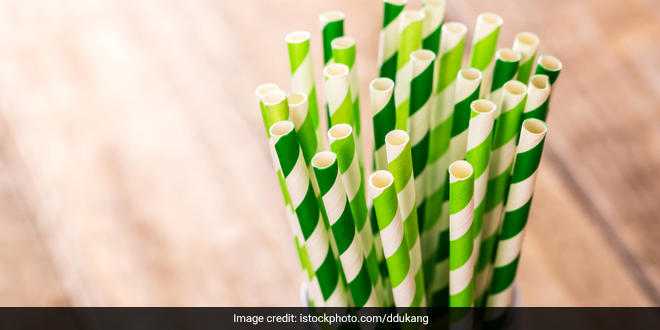 New Delhi: With the ban on plastic straws coming into effect from Friday, large FMCG and agro-food companies have removed integrated plastic straws from small tetra paks of fruit juices as well as dairy products, and are shifting to paper-based straws and other alternative sustainable solutions. Leading companies, including Parle Agro, Dabur, Amul and Mother Dairy, have replaced integrated plastic straws in the tetra paks with alternative sustainable solutions. Industry body Action Alliance for Recycling Beverage Cartons (AARC) said FMCG companies are facing difficulties in replacing plastic straws and that there would also be disruption in supplies as well.

The companies are also facing issues such as left over inventory with their stockists and retailers but they have complied with the government’s decision to ban single-use plastic by importing paper straw and whatever solution is available in the markets, AARC said.

The ban on single-use plastics, including plastic straws, which was announced last year, has come into effect from Friday (July 1).

Parle Agro, a leading player with popular brands such as Frooti and Appy Fizz, has started integrating biodegradable straws in its tetra juice paks as per the new guidelines.

Our manufacturing locations have started with integrating biodegradable straws as per the new guidelines. We have imported paper-based straws for now to meet the deadline, and will move to PLA-based straws, Parle Agro CEO Schauna Chauhan told PTI.

PLA straws are compostable and made from corn starch or sugar cane.

This will commence once all the machineries of our business partners for manufacturing PLA straws are installed and commissioned which will take a few months. We have created infrastructure for the same by developing many local MSMEs as business partners to support us and cater to our volume of biodegradable straws, she said.

Mother Dairy is using imported paper straws for its juices and dairy packs being manufactured from July 1.

We, at Mother Dairy, are in adherence to the new norms and have already imported paper straws in order to ensure compliance. Our carton products, that come under the purview, being manufactured from today (July 01, 2022) onwards will now come integrated with paper straws, Mother Dairy Fruit & Vegetable Managing Director Manish Bandlish said.

AARC CEO Praveen Agarwal said there is going to be lot of discomfort and pain to the retailers holding inventories before June 30.

Industry and different bodies had requested for relaxation and better clarity so that the stocks which are lying in the pipeline of the distributors and retailers could be utilised, he said, adding that around 2 million retailers, who sell these products, they are going to face lots of problems. It is also possible that their products would be sold without straws and in that case, consumers are going to face lots of inconveniences, he said.

Of course, the industry would comply only with what is available and this is going to lead to disruption. Our members are respected corporates, nobody would do anything which is not compliable, Mr Agarwal said.

However, he also said that in the process of compliance, the disruption would definitely happen because alternatives are not there.” Companies had sought a six-month extension to remove the integrated plastic straws from tetra paks. They had cited various issues, including that the country lacks the technology for manufacturing paper straws.

However, the domestic paper industry rejected these claims.