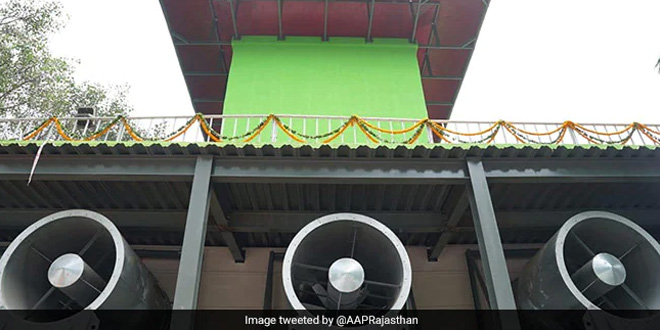 New Delhi: Smog towers may provide immediate relief from air pollution in a small area but they are a costly, quick fix measure with no scientific evidence to back their efficacy in the long-term, several experts said on Monday (August 23) as the first such structure was inaugurated in Delhi. Governments should instead tackle root causes and promote renewable energy to tackle air pollution and reduce emissions, the experts said.

It will be really unfortunate if other cities decide to follow suit and set up these expensive, ineffective towers. They are an enormous distraction from what should be the governments’ focus: reducing emissions, Santosh Harish, a fellow at the Centre for Policy Research, told PTI.

While smog towers might come across as a visible solution to air pollution, there is no scientific evidence — even globally — to support that they can filter outdoor air effectively, added Tanushree Ganguly, programme lead at the Delhi-based Council on Energy, Environment, and Water (CEEW).

Their comments came soon after Delhi Chief Minister Arvind Kejriwal inaugurated India’s first smog tower in the city’s Connaught Place area. The government claimed it will purify 1,000 cubic meters of air per second within a radius of around one kilometre. CM Kejriwal said the over 24-meter tall structure, the first of its kind in India, has been set up as a pilot project and initial trends will be available within a month. If the pilot project is successful, more smog towers will be installed in the national capital. Another 25-metre tower, built by the Central government at Anand Vihar, is expected to become operational by August 31. Each tower costs around Rs. 22 crore. The two towers will have 1,200 air filters. Air will be sucked in from the top of the tower, filtered, and released through the fans at the bottom.

Arguing that anti-smog towers are an ineffective means to control pollution, environment experts raised concerns over their feasibility and said there are no studies to assess the impact of this technology on ambient air quality. Environmentalist Harjeet Singh noted that the installation of the smog tower in Delhi is just a quick-fix solution. It will provide immediate relief from air pollution, and that too in a small catchment area.

CEEW’s Ms Ganguly said the data on the effectiveness of the newly installed smog tower should be pursued rigorously by the government and be made available publicly.

Only once the evidence is available should the state and other parts of the country consider investing in more such towers, Ms Ganguly told PTI.

Severe air pollution in north India has become an annual affair and smog towers have often been viewed as a quick solution to counter the foul air. In November 2019, an expert panel estimated that Delhi will need a total of 213 anti-smog towers to battle the pollution crisis. In 2018, China built a 100-metre smog tower in Xian. The project led to noticeable improvement in air quality in the city, according to the researchers from the Chinese Academy of Sciences, who monitored the project. However, experts in India were unimpressed. According to Mr Singh, questions have been raised about the efficacy of even smog towers in China.

We need to focus on the sources and promote solutions that are systemic and promote behavioural changes, he added.

Agreeing that smog towers have no scientific basis as a policy measure to tackle air pollution, Mr Harish said, “there is no evidence from previous pilots to justify setting up this tower at such high costs.” Ms Ganguly concurred. Rather than investing further in unproven technologies, Delhi must set an example by redirecting these funds on strengthening monitoring of construction sites and industrial units, improving waste management in the city, and prioritising health risk communications, she said.

A Delhi government statement said the smog tower is based on a downdraft air-flow model. Its 40 huge fans will suck air from the top of a special type of canopy structure and release clean air filtered through novel geometry filters, it said. Since it’s a new technology, it is being implemented on an experimental basis. Tata Projects Limited (TPL) built the smog tower with technical support from IIT-Bombay and IIT-Delhi, which will analyse its data.