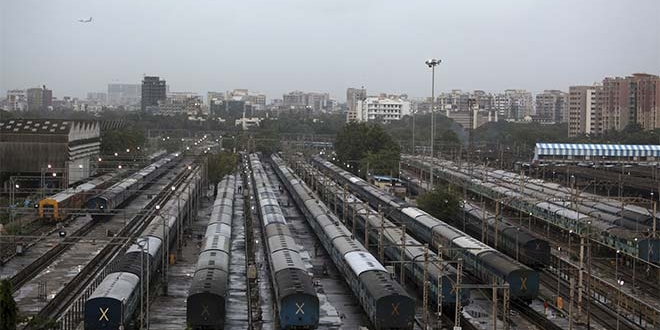 New Delhi: After the Comptroller and Auditor General of India (CAG), a parliamentary panel has now taken note of the problem of stinking and choked bio-toilets in trains and sought measures for their improvement. The Railway Convention Committee (RCC), in its latest report on December 31, has in particular sought a fool proof mechanism for the effective use and management of the bacteria meant to be used in the bio-toilets that are replacing earlier “hole-in-the-floor” toilets in trains in a phased manner.

The 18-member parliamentary panel noted that the bacteria inoculum required for use in the bio-toilets to decompose human waste is currently being generated by the Railways at its in-house plant in Moti Bagh, Nagpur, and is also procured from Defence Research and Development Organisation (DRDO), Gwalior. This is said to be sufficient to cover the requirements of the national transporter.

However, the committee detected a major problem with the bacteria inoculum, its short expiry date. Once it is opened, it has to be utilised within two days, and the Railways is apparently not able to do so, rendering it ineffective. It has sought a fool proof mechanism for the effective use and management of the bacteria meant to be used in bio-toilets.

Responding to the committee’s observation, the Railways said corrective measures have been introduced and cross-checking of bio-toilets has been intensified.

The RCC, headed by Biju Janata Dal MP Bhartruhari Mahtab, has observed that though retro-fitment of bio-toilets is a laudable and environment-friendly exercise, these toilets are beset with problems such as choking, foul smell and overflow of human discharge.

Incidentally, the CAG, in a report in December 2017, had found that almost two lakh complaints regarding choking, smelly and non-functional bio-toilets in trains were received from the public in 2016-2017.

The RCC observed that human waste collected in bio tanks is “biodigested” by the anaerobic bacteria already filled in the bio-tank, which converts the human waste mainly into water and bio-gases. While gases escape into the atmosphere, the water is discharged after treatment.

The committee recommended that given the potential hazards involved in the discharge of waste water, the Railways should take steps for its safe disposal at designated locations without causing pollution. The committee also observed that at various railway stations and railway toilets, a particular type of pungent disinfectant is used, causing discomfort to the passengers.

The Railways informed the RCC that, earlier, a phenylic-type disinfectant was used which had a peculiar smell. Now all zones have been advised to procure deodorising-cum-disinfecting fluid for use in railway offices, hospitals, stations, coach depots and trains.

The panel has suggested that all zones and divisions should start procuring the new deodorising-cum-disinfecting fluid without any delay and replace the old disinfectant at the earliest. Regarding coach cleaning complaints, the committee has sought a quicker response time to redress complaints.

Taking note of third party audit-cum-surveys for assessment of cleanliness at 407 major stations in 2016-17, the committee is of the view that more stations should be covered as these measures put pressure on the staff and officers of all the stations to make their premises neat and clean and also lead to healthy competition among various stations.

The RCC has also taken note that the various cleaning facilities provided by the Railways are confined to few select stations. The committee has said the facilities should be extended to all stations and coaches in a time-bound manner.

The Mahtab-led committee also urged the Railways to conduct passenger awareness campaigns on cleanliness at frequent intervals so as to inculcate a culture of cleanliness among them.

The committee also emphasised the importance of enlisting the cooperation of local governments by the Railways in maintenance of cleanliness, prevention of encroachment and trespassing in the station surroundings and also for solid waste management.