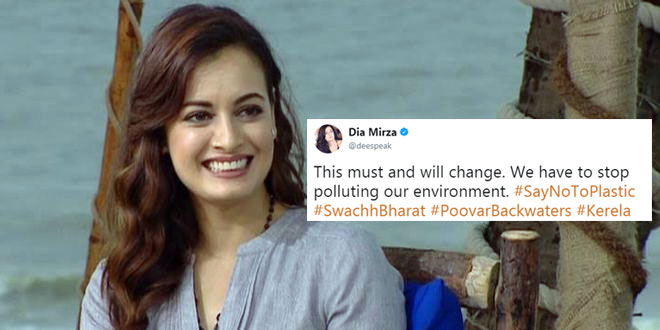 New Delhi: ‘This must and will change. We have to stop polluting our environment,’ says actor Dia Mirza as she shares a short video on Twitter of backwaters littered with plastic bottles in a small coastal village Poovar, Kerala. In another tweet, the actor shared a picture of a beach from the same district and said, “The sunset beach…once pristine white sands now littered with plastic waste. This must and will change, #SayNoToPlastic.”

The sunset beach… once pristine white sands now littered with plastic waste. This must and will change. #SayNoToPlastic #Swachhbharat #Poovar #Kerela #BeatPollution pic.twitter.com/FysdDz9jKq

This is not the first time the actor has voiced concerns over plastic pollution in the country, recently Dia Mirza lent her support to NDTV’s Banega Swachh India 12-hour cleanathon where she highlighted the point that India needs to fight its battle against plastic, she adds,

If we hope to become Swachh Bharat, then we have to create better waste management system, we need to improve the awareness in not just civil society but also in administration. Everybody needs to know one thing that whatever we are consuming needs to go somewhere, so it is very important at administrative levels that better policies are made and as citizens of the country we need to start making informed choices.

The actor also stressed on the point that single use plastic should be banned in our country.

Dia Mirza is already known for replacing plastic from her life, she’s using toothbrush that is not made of plastic but is made from bamboo. She also doesn’t rely on plastic water bottles, the actor believes in refilling and reusing bottles for quenching her thirst, even in plush hotels.

The actor is also the brand ambassador of United Nations Environment Programme and is working relentlessly to educate people on the need to improve and change their behaviour towards clean air, water and wildlife protection. She believes that a series of environmental degradation which India is experiencing in the form of air pollution, water pollution, soil pollution has a serious impact on human beings, health and the progress of the nation. And through her work, Dia aims to bring about serious change in the country and make India truly Swachh.