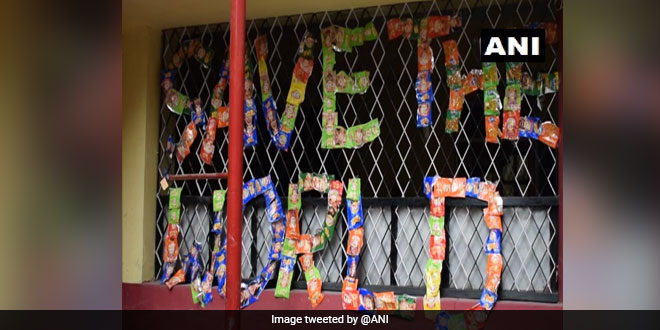 New Delhi: Children in Ambikapur have devised a unique way of demonstrating their pledge against plastic. “We liked your food but we have no idea what to do with this, hence we are sending it back to you,” reads the courier packages, containing heaps of plastic wrappers. These courier packages are made by the students of Ambikapur’s Holy Cross School, who are sending empty plastic wrappers of chips, biscuits and other food items back to their companies, urging them to find a biodegradable alternative. Their initiative also caught the attention of the Prime Minister Narendra Modi, who lauded their efforts to increase awareness on the hazards of single-use plastics. He tweeted,

Great work by our young students. Such efforts will increase awareness on reducing single use plastic.

Great work by our young students.

Such efforts will increase awareness on reducing single use plastic. https://t.co/poBdxPUkXI

Mahi Gupta, a student from the school told ANI,

The note on plastic wrappers reads that even though we liked the food but we don’t know what to do with the plastic waste hence we are sending it back – it’s our way to request them to adopt biodegradable material for packaging food.

Another student Akshita said that they have been doing it for the last two years. She said,

This is the second year that we are doing this. Since we leave our numbers on the note attached to the plastic wrappers, some companies have even contacted us and asked not to do so. But we have decided to continue to send them packages full of the waste created by them, unless they decide to switch to an environment-friendly alternative.

Teachers also lauded the students for their initiative and took pride in their relentless efforts to help curb plastic pollution. She shared,

Sustainability is something we teach our students. Sustainability in simple terms focuses on meeting the needs of the present without compromising the ability of future generations to meet their needs. My students are the future generation and I’m so proud of them to have taken the front seat in securing the environment and fighting plastic pollution. Now is not the time to sit back and wait for people to take initiatives, now is the time to do something and save our planet and oceans.

We are also collecting pen, pencils, sharpeners etc that some of us throw while it can be still used. We will distribute these among poor students, said Shraya Dubey, another student.

Talking about the students’ efforts, a spokesperson from Ambikapur Municipal Corporation told NDTV about the importance of Extended Producer Responsibility (EPR), he said,

We are so happy that these children are holding the MNCs accountable for the waste generated because of them. Extended Producer Responsibility is a key element of Centre’s Plastic Waste Management (PWM) Rules, 2016 and the idea is to make the polluter pay. While most of us ignore the most common type of plastic waste – plastic packaging, it is something that is creating the most menace from hills and mountains to lakes, rivers and oceans are all suffering because of plastic packaging. Ambikapur has a garbage café where we urge people to bring plastic waste and get a free hot and delicious meal in return, that’s how seriously we take plastic waste. I’m glad young students from Ambikapur are taking lead in EPR as well!

Also Read: These Young Students From Gurugram Saved 14,000 Plastic Wrappers From Ending Up In Landfills, Here’s How

As per the Central Pollution Control Board estimates, India generates approximately 7-9 million tonnes of plastic waste every year. In 2016, the concept of Extended Producer Responsibility (EPR) was introduced into the Plastic Waste Management Rules, 2016 (PWM). EPR is a practice and policy approach wherein producers are held accountable for collecting and processing their manufactured products upon end of their lifetime. In simple words, if you buy a packet of chips for the company XYZ, after you’re done eating it, EPR says that the plastic wrapper should be collected and recycled by XYZ.

Made Entirely Out Of Single-Use Plastic, Kerala’s Marine Cemetery Is A Call To Action To Save The World