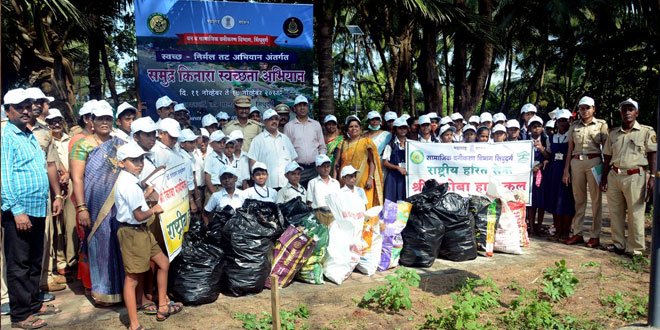 New Delhi: In an effort to clean beaches and to make people aware about the coastal eco-system in the country, the Ministry of Environment, Forest and Climate Change (MoEFCC) has undertaken a week-long mass cleanliness campaign ‘Swachh – Nirmal Tat Abhiyaan’ at 50 beaches of 10 coastal states. The initiative which was launched on Monday (November 11) is being carried out in collaboration with Society of Integrated Coastal Management (SICOM), a body UNDER MoEFCC working on coastal issues, plus state governments of coastal states participating in the drive namely Gujarat, Daman and Diu, Maharashtra, Goa, Karnataka, Kerala, Tamil Nadu, Puducherry, Andhra Pradesh and Odisha.

Also Read: Heroes Of Swachh India: Meet Afroz Shah, The Man Who Turned The Tide Against Dirty Beaches With His Cleanup At Versova

According to Ritesh Joshi, Project Consultant at MoEFCC the campaign includes cleaning of beaches from November 11 to 17 and will involve participation from school and college students who are eco-club members, district administration, public institutions, volunteers, and local communities. He said,

We have directed all district administrations in state to ensure participation of at least 200 students from their district in the on-going drive. This is because we want to target the youth through this clean-up campaign. The aim is to make them aware about the diverse coastal ecosystem which includes marshes, mangroves, wetlands, and many different kinds of plants and animals.

According to Mr. Joshi, the beach cleaning drive is being done for 2-3 hours daily and a minimum of a one-kilometre stretch will be identified at each beach to be cleaned per day. He further said that sand cleaning machines are being used for the clean-up. In the first two days of the clean-up, approximately 50 tonnes of waste has been collected. The local municipal bodies have been given the responsibility of processing the waste collected during the beach clean-up drive by segregating and sending it for recycling or for disposing of.

Lauding the beach clean-up efforts of MoEFCC, Jobin Thomas, a 49-year-old, Budget and Policy researcher who lives near the Mahatma Gandhi Beach in Kerala said,

It wasn’t very long ago when turtles were a common sight at beaches. Now they are not only spotted rarely on the beach but are also becoming endangered because of the humongous amount of plastic waste lying in the ocean. Earlier I used to see children playing in the sand, but now the beach has become very dirty because of all the plastic thrown back by the ocean. I am glad that the government has taken cognisance of the situation and started this clean-up drive with children and people.

Also Read: #BigMumbaiCleanup: Mumbaikars To Come Together For A Massive Cleanliness Drive At 100 Locations Across The City

Chinu Kawatra, an environment activist who has established himself as a beach clean-up champion over the past two years, while acknowledging the ongoing efforts, called for sustained government efforts in this direction. He said,

Swachh – Nirmal Tat Abhiyaan will certainly encourage the people who are constantly working on making people aware about the importance of cleaning beaches. But I would also say that these efforts need to be continuous. A clean-up drive here and there will not make any difference.

Last month, during his visit to Mamallapuram, Tamil Nadu Prime Minister Narendra Modi picked up the trash on a beach in a bid to inspire people to clean up beaches and stop littering.

Why Is It Important To Keep The Beaches Clean?

According to the National Oceanic and Atmospheric Administration (NOAA), United States of America, garbage has a huge impact on marine ecosystem and causes problems ranging from killing animals like whales, turtles and birds, to ruining the aesthetic appeal of the ocean, to entering the food chain through seafood and salt consumed by humans. It also reports that much of the sea pollution is in the form of microplastics, small pieces of plastic that are 5 millimetres or less and cleaning up the plastic bottles, carry bags, other items during a beach clean-up will keep a large quantity of microplastic out of the ocean.