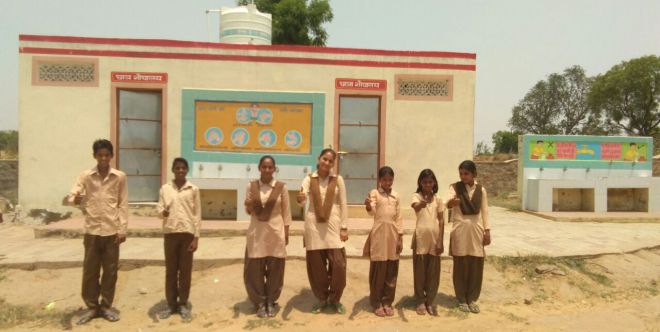 New Delhi: ‘We always loved going to the school and learn new things, but, lack of toilets kept us away from it for many years,” said a group of children at Jatpur School in Ramgarh village of Alwar in Rajasthan who eradicated open defecation from their school by building toilets. But the unique bit is how they arranged for the funds. Explaining the school’s ODF success journey to NDTV, 14-year-old Rekha said,

Earlier, we didn’t know the benefits of having a toilet at home or school. In 2015, when Sangeeta Di, started sharing insights on how open defecation is making us fall sick regularly and how it is affecting the whole country, especially girl’s honour, we decided to do something about it.

Sangeeta Di aka Sangeeta Dadhich is the Project Coordinator of AIMED NGO, who is helping children of Alwar get access to safe sanitation. Sangeeta added,

In 2015, when we came to this school, we found, that there is no access to water, sanitation and hygiene facilities. Moreover, on interacting with the school children, we figured, that they even don’t know what a toilet is – because that time, they had not used one. Together with Plan India, an NGO, that is also helping children get access to safe sanitation in India, we implemented model school programme in this school. The aim was to educate them about having toilets and teach them the basics of safe sanitation, by inculcating good hygiene practices.

Also Read: From Sanitation Coverage Of Less Than 30 Per Cent In 2014 To Going Open Defecation Free In 2018, Here’s Rural Rajasthan’s Swachh Turnaround Story

“We wanted to get the community together by creating awareness regarding sanitation so that together they all can fight for their swachhta. We formed children communities, parents’ communities and teacher communities and started educating them about how they can improve their swachh hygiene by following simple practices. We educated them on the need to construct toilets in schools. We focussed on educating more and more children so that they can take this ODF fight forward.”

The first successful step for the Model School Programme was when the whole community decided to safe save money in order to get toilets at school premises for their children.

What the community started doing was – they simply started keeping all the shagun money separately that they used to get through marriage functions in the village. Within a few months’ the community saved enough money to get their children access to toilets in school, adds Ms Sangeeta. 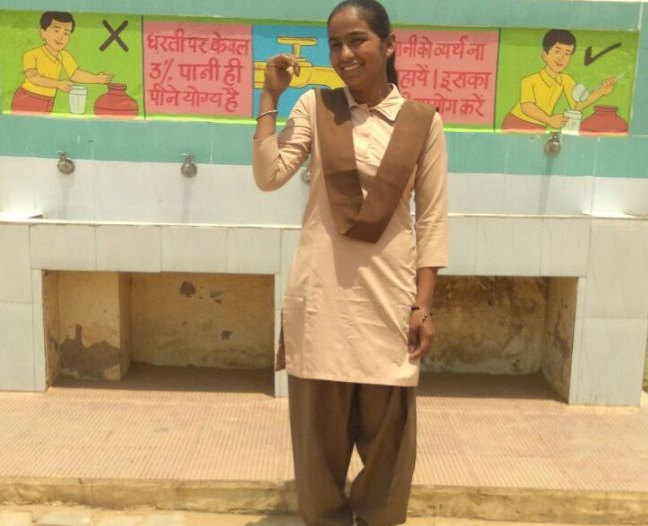 Expressing how a toilet in school changed her life, 12-year-old Karina, who recently also convinced her parents to get one at home, added,

“The first day, when I used a toilet at school, I realised, what I was missing for 12 years in my life. That day, when, I went back home, I asked my parents to construct one at home as well. So far, my journey without a toilet at school or home was very shameful. But, now, I am happy. My appeal to everyone out there, who is of my age and still going out in the open to defecate – it is the time, we should convince everyone out there to give us our basic right – access to a toilet.”

Karina is not alone, in this school, mostly all the children have persuaded their parents to build a toilet at home. As a result, today Ramgarh village has achieved open defecation free status. Talking about how toilets have improved attendance and health of students, Ms Swati added,

When we came here, there were mere 98 students in this school, today that number has moved upto 282. Moreover, the attendance of these children has improved. Now, we are seeing how these children are taking the lead in the swachhta mission. From taking regular rounds in their villages to check for open defecation to making sure their own and school toilets are clean – these children are doing it all.

Because of success stories like Jatpur School, today Rural Rajasthan stands proudly at the open defecation free mark. Till date, 76.47 lakh toilets have been constructed in Rajasthan since 2014, the highest among all Indian states.

The ODF coverage of rural parts of Rajasthan has moved up from mere 29% to nearly 100% today. Even the problematic districts of Alwar, Barmer, Karauli and Udaipur have self-declared themselves ODF, stating that all the villages in these districts have 100% sanitation coverage and await verification from the government and Quality Council Of India (for third-party verification) to officially be declared ODF.

Amitabh Bachchan Blogs, ‘Do Just One Act Of Cleaning Up The Environment’

Breaking The Barriers: This Powerful Poem By A Class XII Student From Amitabh Bachchan’s School Asserts The Need To Fight For A Swachh India