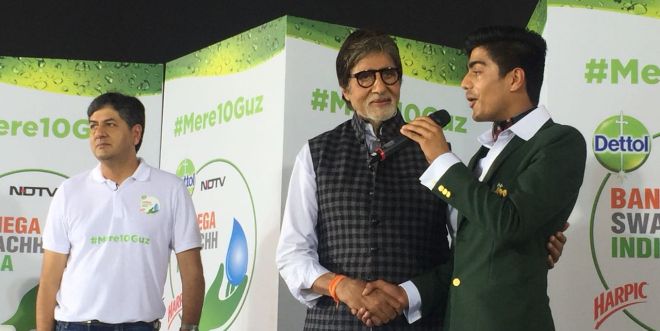 New Delhi: “Women are treated as goddesses, icons and figures of inspiration, despite that, many women in India still go out and defecate in the open. This scenario in our country is in sharp contrast to all the advances India has made in different fields over the years. We all need to understand, if the woman of our house is not happy, then no amount of prayers will bear fruits.” This is an excerpt of the poem penned by Class 12 student Apoorv Vikram Shah to advocate the Swachh cause. Apoorv recited this poem when he made an appearance at the launch of NDTV-Dettol Banega Swachh India Season 5 to surprise Campaign Ambassador, Amitabh Bachchan. 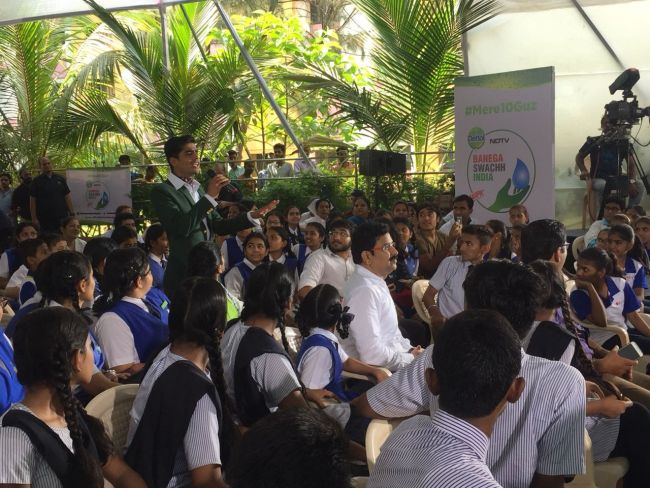 Apoorv first struck a chord with Mr Bachchan when two years ago his school Nanital’s Sherwood College, which happens to be Amitabh Bachchan’s alma mater, joined the clean-up drive during the 12-hour #Mere10Guz Cleanathon. He impressed everyone, especially Mr Bachchan with his powerful words and recitation.

He came back with a new poem on the issue of cleanliness during the next year’s Cleanathon.

During his recitation today at the launch of Season 5 of the Banega Swachh India campaign, he appealed everyone to come forward and end open defecation, still a sad reality in India. Apoorv further added,

We all need to come together and make India free from open defecation by the end of 2019. We need to take the oath that every house in India will have a toilet.

In the end, Apoorv signs off by saying,

What has not been achieved so far, should get done in the coming year. This time, we as children have to fulfill the dream of Swachh Bharat. Similar to the vanquishing of Ravana by Ram, children need to fight the demons of garbage and filth.

Amitabh Bachchan was again impressed by how children of India are being such vocal agents of change. He said it is amazing to see such participation from the youth and it gives a lot of hope to India’s Swachh movement.

A Success Story From Alwar, Rajasthan: Here’s How This School Eradicated Open Defecation By Collecting Money During Marriage Ceremonies