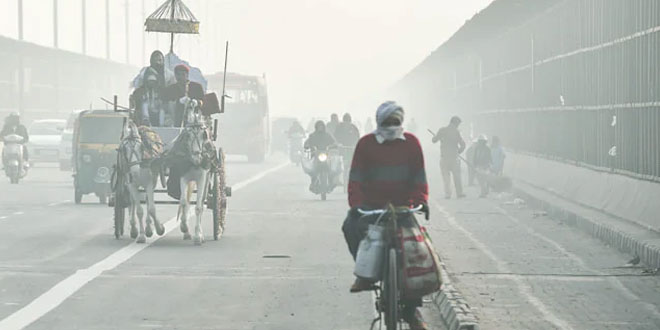 New Delhi: At least 73 per cent of Delhi residents are ‘not satisfied’ with the air quality here, while 43 per cent of them found it to be ‘better’ than last year, according to a new survey released on Wednesday. The survey, titled ‘Study on Delhi’s perception and accountability on air pollution‘, has been conducted by the United Residents Join Action (URJA), the apex body of the Resident Welfare Associations (RWAs) of Delhi. The URJA conducted the survey within a 5 km radius of the location of the monitoring stations of the Central Pollution Control Board (CPCB) around 10 locations in Delhi, including Rohini, Anand Vihar, ITO, Siri Fort, Bawana, R K Puram, Patparganj, Lodhi Road, Dwarka and Ashok Vihar. According to the survey, the awareness levels of citizens living close to these monitoring locations were surprisingly low. The survey report said,

Eighty nine per cent of the respondents were not aware of any such monitoring, while another 88 per cent had not visibly seen any LED screen displaying real time air quality data. This explains that while nearly the entire urban population is aware of the existence of air pollution, public action needs a spurt, which can only happen, when the public is fully aware of the facts.

On levels of air pollution, the study says that while PM2.5 level – fine particulate matter in the air with a diameter of less than 2.5 micrometers – in Anand Vihar went above 960 during the period of November to first week of January, the PM2.5 readings at ITO were 1,700 on November 8 and above 900 at Lodhi Road areas. The other locations did not fare better.

The URJA has also released findings of 45 RTI (Right To Information) applications filed to 14 departments, including central, state and municipal bodies in order to assess the effectiveness of the Graded Response Action Plan (GRAP). An official statement by the URJA said,

The EPCA replied to one out of seven questions in the RTI saying that 18 meetings were conducted on the GRAP and mentioned that departments like the Delhi Metro Rail Corporation (DMRC) and the Public Works Department (PWD) were missing in the participants list. The Transport Department responded that challans were issued to polluting vehicles and higher taxes were imposed on diesel cars over petrol, but there is no information available on the environment pollution charges collected by the department.

It added, “While the CPCB responded that out of 17 categories of highly-polluting industries in the NCR region only three industries complied with the CPCB norms, out of these two were closed on their own and one complied with all pollution compliance norms. However, the number of industries in the neighbouring states which comply with pollution standards paints a clear picture of the scenario — in Haryana five out of the existing 161 industries, in Rajasthan 20 out of 161, and in Uttar Pradesh 25 out of 942 industries comply with pollution standards, as per the RTI response.”