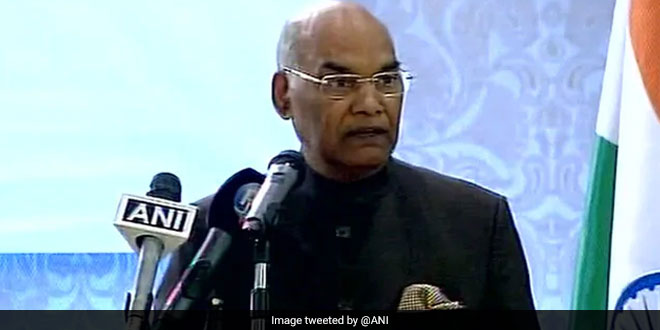 New Delhi: Around 10 crore toilets have been built under the Swachh Bharat Mission, and with this there has been a change in the attitude of 55 crore people who have ceased the practise of defecating in open, President Ram Nath Kovind said on Friday. Recalling the Mahatma Gandhi International Sanitation Convention held in 2018, he said that several countries want to learn from the success achieved by India under the Swachh Bharat Mission.

We must share our experience with them. Seventy countries participated in it (Mahatma Gandhi International Sanitation Convention) and countries became curious about the mission.

He further said that ten crore toilets have been built under the Swachh Bharat Mission and more than 55 crore people have ceased the habit of defecating in open. He highlighted that there has been a positive change in the lives of people.

The government is aiming 100 per cent Open Defecation Free (ODF) by October. President Kovind said that it is noteworthy that India will achieve its Sustainable Development Goals (SDG) related to hygiene, as envisaged by the United Nations, by 2030.

He also recalled the Kumbh Mela held in Allahabad, Uttar Pradesh this year which was attended by 25 crore people. President Kovind said 1.20 lakh toilets were built and everyone appreciated the sanitation. Referring to the Jal Jeevan Mission, President Kovind said providing clean drinking water also comes under the purview of sanitation. The President also gave awards to people who have done significant work in this field.