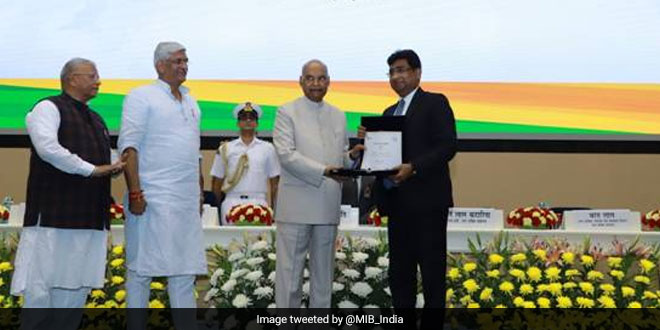 New Delhi: President Ram Nath Kovind on Friday conferred the Swachh Bharat Awards on 27 women champions from each state for their outstanding contribution to the Swachh Bharat Mission. These women worked at the grassroots level to provide better sanitation access to their families. Addressing the Swachh Mahotsav, the President said the biggest achievement of the Swachh Bharat Mission was that it had become a campaign of every Indian and was not just a government campaign. “Everyone has taken up the task of cleanliness as his/her own responsibility,” he said and added, there had been an attitudinal change in 55 crore people who had stopped defecating in open.

While referring to the UN sustainable development goals to be achieved by 2030, the President said India was set to achieve the cleanliness target in 2019 itself, 11 years ahead of schedule. The goals for the next phase should be achieved by strengthening the first phase’s success. The culture of cleanliness should be imbibed and the attention should be paid towards maintenance of facilities set up during the first phase, he added.

The Vaishno Devi Shrine Board in J&K received the Best Swachh Iconic Place award and the Ministry of Railways was given Swachh Award in the Swachhta Action Plan category.

The Swachhta Pakhwada Award was given to the Department of Defence. Power Grid Corporation received the award in the category of public sector undertakings. Gujarat and Sikkim were given Open Defecation Free (ODF) and Behaviour Change awards.