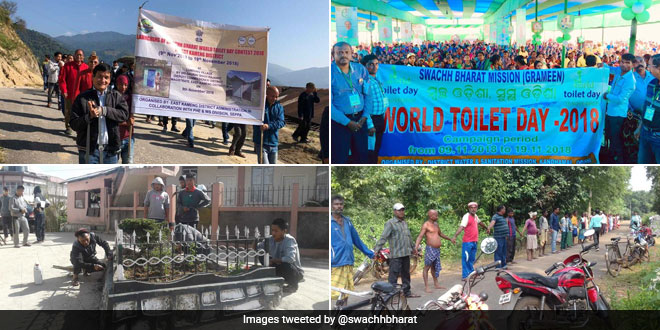 New Delhi: As the Swachh Bharat Mission (SBM) operates is in its fifth and final year, the Ministry of Drinking Water and Sanitation (MoDW&S) has instituted the “Swachh Bharat World Toilet Day Contest 2018” for all districts and states in India. The contest aims to re-emphasise the need for sanitation to become a people’s movement with a special focus on sustaining ODF (Open Defecation Free). From 9 November to the World Toilet Day which is on 19 November, districts and states across the country will compete on a range of ‘Swachhata’ activities to sustain and reinforce the behaviour change outcomes achieved by them so far.

Be a part of the #SwachhBharat #WorldToiletDay contest and help your district/state sustain and reinforce the behaviour change outcomes achieved so far. To know more, visit: https://t.co/b72mxIi4Lz

The Ministry has asked all the districts and states to conduct sanitation related activities by engaging the community during the 10 days run-up to the World Toilet Day, November 19, like awareness programmes, awarding the ground-level ‘swachhata champions’ at public events, waste collection and segregation programmes, and initiating setting up of biogas units. The activities done specifically on the World Toilet Day will earn extra points. From November 20 to November 30, the District Collectors and State Mission Directors can apply for the contest from the online portal of Swachh Bharat Mission by reporting the activities done during November 9 to 19. The contest, however, is not open for districts of the five States where Model Code of Conduct is currently in force for elections, viz. Rajasthan, Madhya Pradesh, Chhattisgarh, Telangana and Mizoram.

The District collectors and State Mission Directors are required to share a report of the ‘swachhta’ activities conducted in their jurisdiction during the contest period of ten days, in the format provided on SBM online portal along with supplementary information on details of the activities, relevant photographs and videos. “The Ministry has put up a template, with indicators for evaluation, to be used as to apply for the contest on SBM’s online portal which will be done by the District Collectors and State Mission Directors in the next ten days after November 19,” said Mr. M. Yogindran, Section Officer, MoDW&S.

The districts and the state missions will be evaluated on thirteen indicators which are divided into nine tasks to be carried out during the ten days period. These indicators include –

– Number of households visited to drive behaviour change with respect to sanitation
– Number of rallies/drives organised
– Number of people participated
– Number of villages covered
– Number of Swachhata Champions such as Swachhagrahis, Block Development Officers, Sarpanches, and Pradhans awarded at public events held for this purpose,
– Number of dustbins distributed
– Number of biogas units sanctioned
– Percentage of Gram Panchayats with twin-pit models installed and displayed at Panchayat Houses.
– Any other innovations related to the quality and sustainability of ODF outcomes in districts are also required to be reported to compete in the contest.

The results of the contest will be announced by the Ministry in December and the evaluation of the nominations will be done by a committee which is yet to be formed, informed a senior officer from Ministry of Drinking Water and Sanitation.

The top 10 District Collectors, along with the top three State Mission Directors/State Secretaries in-charge of sanitation will be recognized and awarded by the Swachh Bharat Mission and will also win a chance to interact and share their ODF journey and future strategies with Swachh Bharat brand ambassador, and Actor Akshay Kumar, informed the MoDW&S.

Take a step towards ensuring a safe and clean future for your district on #WorldToiletDay, and get a chance to meet and discuss #sanitation with #SwachhBharat Ambassador, Mr. @akshaykumar. To know more, visit: https://t.co/b72mxIi4Lz

Districts across the country have already started organising a slew of activities for the contest. To name a few, in Daringbadi, Odisha more than 6000 people came together to be part of awareness activities conducted by the district authorities on sanitation including a speech about the need for safe sanitation, and a skit by school students.

In the Mayurbhanj district of Odisha, rallies and human chains are being organised across 26 blocks to echo the message of sanitation on the World Toilet Day Contest.

A rally and human chain were organised to echo the message of #Swachhata for #WorldToiletDay across 26 blocks of Mayurbhanj district, #Odisha. #WTD2018 pic.twitter.com/jF0m1MxSJz

In the East Khasi Hills District of Meghalaya, to mark the launch of the contest, the local government along with the people conducted cleanliness drive.

Beginning of #WorldToiletsDay 21018 activities in East Khasi Hills District of #Meghalaya, at Smit village. The people of the village came together for a cleanliness drive. pic.twitter.com/u8x2iGN4oy

Awareness activities like rallies, door to door dialogues on behaviour change about sanitation and cleanliness drives were carried out in each panchayat of the Daman district.

Officially launched #SwachhBharat #WorldToiletDay Contest 2018 campaign in Daman District. Awareness activities like Rallies & Door to Door drives were carried out in each Panchayat along with Cleanliness Drives to drive behaviour change about sanitation. @prafulkpatel @Sajjan95 pic.twitter.com/EkoDOAivy7

The contest is in line with the efforts for achieving the Sustainable Development Goal 6 (SDG-6) which aims to ensure that everyone has a safe toilet and that no-one practices open defecation by 2030. SDGs are a collection of 17 global goals with 169 targets set by the United Nations General Assembly in 2015 through a resolution titled “Transforming our World: the 2030 Agenda for Sustainable Development”. The SDGs have been adopted by all the member states to address global challenges, including those related to poverty, inequality, health and wellbeing, climate, environmental degradation, prosperity, peace and justice.

November 19 was declared as World Toilet Day in a resolution adopted by the United Nations General Assembly titled, ‘Sanitation for All’ (A/RES/67/291) on July 24, 2013, to tackle global sanitation issues. The resolution urges the UN Member States and relevant stakeholders to encourage behavioural change and the implementation of policies to increase access to sanitation among the poor, along with a call to end the practice of open-air defecation, which it deemed extremely harmful to public health.

The theme for campaign and events marking World Toilet Day in 2018 will be: ‘When nature calls’, as informed in a statement by the United Nations. The Statement says that billions of people in the world do not have a toilet when nature calls. It also urges the member states to focus on nature-based sanitation solutions to help treat human waste before it contaminates water and soil that sustain human life.