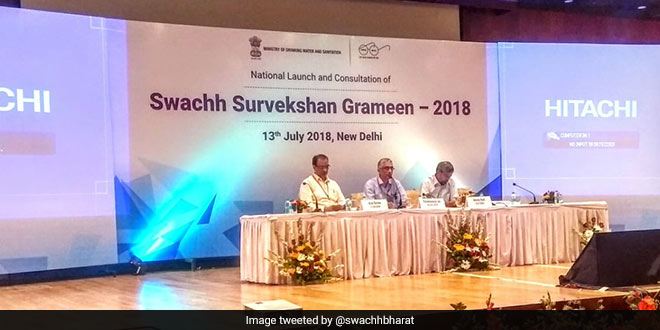 New Delhi: After the successful completion of four editions of Swachh Survekshan for India’s urban local bodies, India’s villages and districts will now have a chance to participate in a similar survey. Swachh Survekshan Grameen 2018 was officially unveiled by the Ministry of Drinking Water and Sanitation on July 13. Similar to Swachh Survekshan Urban, states and districts across India will be ranked as per their sanitation and cleanliness status to ensure healthy competition and keep everyone motivated to embrace and sustain the Swachh Bharat Abhiyan goals.

Parameswaran Iyer, Secretary, Ministry of Drinking Water and Sanitation and Arun Baroka, Joint Secretary, Swachh Bharat Gramin, kick started the Swachh Survekshan Grameen 2018 initiative. Mr Iyer said that the Survekshan will be really important for the cause of Swachhata. The survey will be a holistic campaign, that will determine the progress of sanitation and cleanliness in rural India, said Mr Iyer.

Similar to Swachh Survekshan (Urban), a range of parameters will be used to rank villages and districts. District-level surveys of public places like schools, Anganwadis, primary healthcare centres, markets and panchayats will be conducted  to check the status of sanitation facilities available in these places. Citizens’ perception of Swachhata will be taken into account during the survey. The Ministry will take feedback from 50 lakh citizens during the course of the Survekshan. Village meetings, group discussions and survey using an online app for Swachh Survekshan Grameen will be used to gather feedback from people.

Secretary, MDWS Shri @paramiyer_ talks about the importance of the #SwachhSurvekshanGrameen initiative. This is aimed at being a holistic campaign that will determine the progress of #Swachhata on ground. pic.twitter.com/517WsPUocA

Availability of toilets, usage of sanitation facilities, hygiene and maintenance of sanitation facilities, status of littering in public place and status of stagnant water in localities are some of the parameters the Ministry will use during the Survekshan. The survey will cover 698 districts out of 712, 6980 villages out of over 6 lakh and 34,900 public places, which will include schools, Anganwadis, public health centres, markets and places of religious worship. As a part of the survey, the Ministry will consult extensively with state governments and districts to get a clearer picture of sanitation and cleanliness, and what the impact of the Swachh Bharat Abhiyan has been on ground. The top performing districts and states will be awarded on the occasion of Gandhi Jayanti this year.

Swachh Survekshan (Urban) has grown exponentially, from covering 434 cities in 2017 to 4,203 cities in 2018. The Survekshan has also brought a sense of competition among urban local bodies, which resulted in the improvement of civic amenities in many cities. Swachh Survekshan Grameen, though beginning during the fourth year of the sanitation programme, will be expected to bring in the same sense of competition among participating districts and villages.