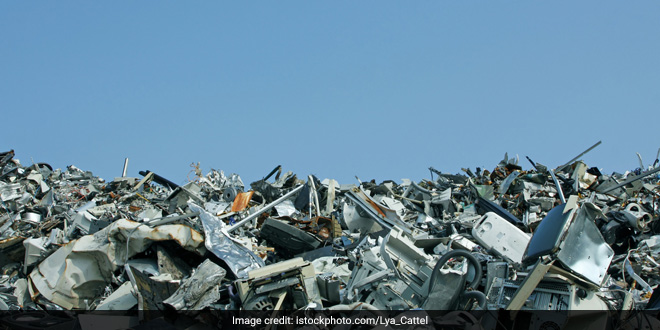 New Delhi: The effective management and disposal of electronic waste, or e-waste — the innards and shells of dumped smartphones, desktops, laptops and printers, among other things — is a massive modern-day challenge. But an India-born Australian says end-of-life electronic products offer huge economic and job-generating potential, and India, which produces upward of two million tonnes of electronic waste every year, surely has an advantage.

Ms Sahajwalla is the inventor of what she calls microfactories that can transform e-waste into reusable material to be converted into ceramics and plastic filaments for 3D printing. The high-grade metals — like gold, silver, copper, palladium — in the e-waste can be separated for re-sale in conditions that are totally safe.

India has an advantage, she said. But how?

Street scrap collectors, and the country has a huge number of them, can be employed, trained and introduced to the microfactories.

“India already has kabadiwallas (waste collectors) and scavengers working at the grassroots level, collecting and separating waste and that is the biggest advantage the country has.

What we and the government need to do is give them the technology, deploy the (e-waste) microfactories and teach them how it works. What will happen is that, instead of burning that e-waste, these people will be working in a sustainable and safe environment without producing any kind of toxic waste, the Mumbai-born alumnus of IIT-Kanpur’s metallurgical department told IANS.

“This way,” she said, “we are not displacing the kabadiwallas and scavengers. Instead, we can create more job opportunities.”

The Director of the Centre for Sustainable Materials Research and Technology (SMaRT) at UNSW was in the capital to meet government officials to discuss her invention.

The recipient of the 2011 Pravasi Bharatiya Samman, the highest honour conferred on overseas Indians, for outstanding achievement in science among numerous other awards, proposed to deploy a microfactory in Delhi’s Seelampur — the capital’s digital graveyard with piles of discarded mobile phones and computers.

People in this semi-urban pocket work with waste, including e-waste, to create value-added products like decorative glass panels, acoustic panels with throwaway cloth and high-grade wood-plastic panels. She said her invention “offers a cost-effective solution to one of the greatest environmental challenges of our age”.

She said e-waste generally contains 40 per cent plastic which is usually burnt adding to air pollution.

“There is no reason to burn plastic… microfactories can create filament with plastic by compressing the waste in a temperature-controlled area.”

She also said her solution fitted in perfectly with Prime Minister Modi’s mission “Make in India” and “Swachh Bharat” missions.

“A modular microfactory, which would require a 50 square metre area, can be located wherever waste is stockpiled. The science behind these factories would be brought in from Australia. These microfactories are affordable, can be built locally and will help empower the people working with waste.

If you can create products by using e-waste and then sell the filaments (to) make value-added products using 3D printing, then we are not only making our environment more liveable, but we are also creating sustainable job opportunities for the people at the lowest level of the chain.

So, what prompted her to do something about all the waste? She says that it was a visit to Seelampur last year that got her thinking about the inequity in our societies. “It was so sad to see people working under conditions that would be considered unacceptable to all of us.

“It is difficult to digest how we are allowing everything that has got so much economic value in itself to not be processed in a way so there is equity. We love our phones and computers. But at the end of the spectrum, when all these technologies come to the end of their lives, we have people working under unacceptable conditions to get rid of it. It’s almost ironic that there are two extreme ends of the best and the worst of technology.”

She said it was UNSW’s “holistic approach to education” that helped her seamlessly venture into different aspects of research to be able to invent the microfactory, launched at the varsity earlier this year. She said material science students from India, including doctoral and a postdoctoral students, were doing cutting-edge research at the UNSW.

Nearly 15,000 Premature Deaths Due To Air Pollution In Delhi: Study