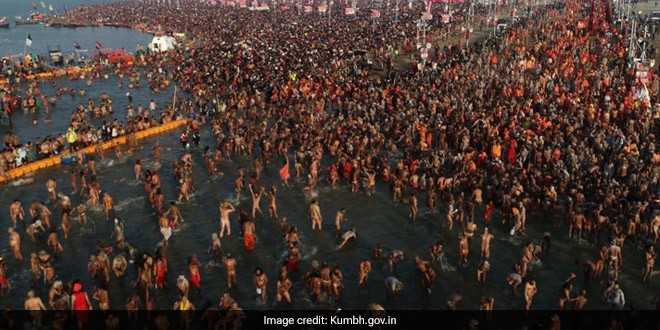 New Delhi: ‘Earlier, Kumbh Mela was popular because of Naga sadhus, saints and for spiritual reasons, this year, everyone is coming from Kumbh and talking about its swachhata,’ says Prime Minister Narendra Modi while addressing the gathering at Kurukshetra in Haryana during the third edition of Swachh Shakti event that was held to recognise women for their continuous efforts towards the Swachh Bharat Abhiyan and taking the lead to meet its objectives.

More than 17 crore people participated in ‘shahi snan’ at the confluence of Ganga in Allahabad. This is more than the combined population of many countries, and then also the swachhata standards in the ongoing 55-day Ardh Kumbh Mela have remained up to the mark.

Swachhstandards in Kumbh 2019 has also got the thumbs up from one of America’s big newspapers – The New York Times recently published a report about how this year’s Kumbh has been successful in promoting the cause of Swachhata.

To live up to the theme – Swachh Kumbh, Surakshit Kumbh, this year, authorities have employed more than 20,000 sanitation workers, 1500 swachhgrahis (clean India volunteers) to educate and motivate people to keep the Kumbh premises clean. Over 1.2 lakh toilets have been installed and temporary Sewerage Treatment Plants have been set up so that no faecal waste ends up going in the Ganga.

Along with these swachh steps, there are also many unique steps that have been taken, such as a ‘toilet cafeteria’ in Prayagraj has been installed that has commode-style chairs with messages like “Trip to toilet will save a trip to doctor”, “Don’t forget to wash hands after a toilet visit” – to motivate and educate people about the ongoing Jan Andolan in India.

Apart from the toilet cafeteria, there are ‘Swachh Raths’ that are taking rounds of the grounds to educate pilgrims and tourists on ways to keep Kumbh clean.

To keep a check on one of the most littered items in the mela – plastic bottles, dispensing machines have been installed where pilgrims and tourists can deposit plastic bottles and get a coupon for a cup of tea for free.

The 55-day long Ardh Kumbh Mela that commenced on January 15 in Prayagraj (Allahabad) of Uttar Pradesh will end on March 4 and during this period over 130 million pilgrims are expected to participate in the festival.

There Will Be A Time, When Tourists Will Come To India To Visit The Colourful Toilets, Says PM Modi At Swachh Shakti 2019