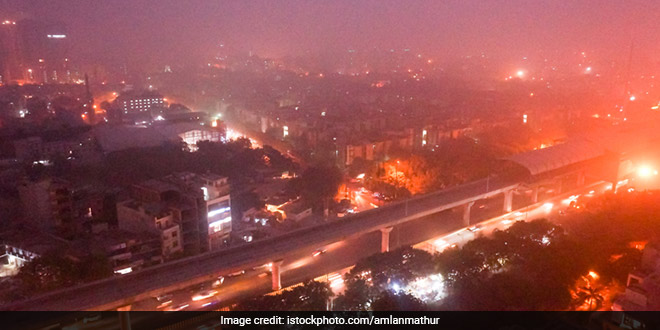 New Delhi: The high level of air pollution in Delhi has raised great concerns for the residents as well as the state administration. The present levels of particulate matter in the atmosphere are sufficient to contribute towards depleting health standards and a high level of toxicity in the air with dangerous gases. According to the Centre-run System of Air Quality and Weather Forecasting And Research (SAFAR), the Air Quality Index (AQI) of the capital in the morning was recorded 332, falling in the ‘very poor’ category.

Apart from the menace of air pollution, the people residing in Delhi are also battling with thick fog and haze. According to the data compiled by the Indian Railways, as many as 14 trains were rescheduled and delayed due to the presence of fog on the railway tracks.

People have been advised to avoid prolonged or heavy exertion. The SAFAR advisory said, “Go for a short walk instead of a jog and take more breaks. Stop any activity level if you experience any unusual coughing, chest discomfort, wheezing, breathing difficulty, or fatigue. If the room has windows, close them. If the air conditioner provides a fresh air intake option, keep that closed. Avoid burning of wood, candles or incense. Keep the room clean – don’t vacuum. Do wet mopping to reduce dust.”

Delhi, which is home to approximately 19 million people, is reeling under the menace of air pollution from the past couple of years. The region faced a major air quality crisis last year as pollution levels shot through the roof and even forced the shutdown of schools. Even Delhi Chief Minister Arvind Kejriwal had described the capital as a “gas chamber” and local administration was compelled to declare a public health emergency.

Swachh Kumbh Has Succeeded In A Big Way To Send Out The Message Of Swachh Bharat Mission: PM Narendra Modi