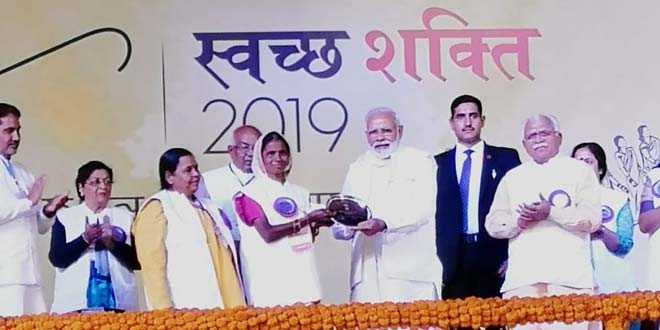 New Delhi: “We all have heard about many prestigious beauty contests, but have we ever heard about the ‘Toilet’ contest? In rural India, recently a unique competition was initiated – Swachh Sundar Shauchalaya contest, where people decorated their toilets with paintings, local art and Swachh Bharat Abhiyan messages and logo. With such progress, I believe, there will be a time in India, when one of the villages will become a successful tourist spot, where people will come to visit the colourful toilets,” said Prime Minister Narendra Modi while addressing the gathering of more than 15,000 women swachhagrahis (Clean India Champions) at Swachh Shakti 2019 event organised in Kurukshetra, Haryana. This is the third edition of the Swachh Shakti event, wherein Prime Minister Narendra Modi has awarded various women leaders for their continuous swachh contributions. Swachh Shakti event has been organised in association with the government of Haryana with an objective to focus on the leadership role played by women from rural India to make Swachh Bharat Abhiyan a huge success.

Hon'ble Prime Minister, Shri @narendramodi presents the Swachhata Shakti awards to the women #Swachhata champions from across the country. These champions have played a pivotal role in encouraging communities to undergo behaviour change for a clean tomorrow. #SwachhShakti2019 pic.twitter.com/9Q7zu2gMai

Further highlighting the success of Swachh Bharat Mission and how it has changed the fate of the country over the years, PM Modi added,

Today, thousands of swachhagrahis have gathered here for the Swachh Shakti event – This in itself is an example of how Swachh Bharat Abhiyan has evolved over the years.

Sharing statistics of Swachh Bharat Mission and its contribution towards a new and cleaner India, PM Modi said,

In 2014, more than 30 crore women of our country had to wait till night, to relieve themselves. Our daughters used to leave schools in between as there were no separate toilets for them. Keeping these statistics in mind, we started one of the biggest swachh movements – Swachh Bharat Abhiyan. Today, after four successful years of the mission, the sanitation coverage of the country has moved up to 98 per cent from mere 40 per cent in 2014.

We have made more than 10 crore toilets in the country, because of which today 5.5 lakh villages and 600 blocks have achieved the coveted tag of open defecation free (ODF). Not just that, because of the mission, 45 lakh people have gained employment.

PM Modi also stressed on the findings of the World Health Organisation that reported because of successful implementation of Swachh Bharat Mission in India, in last four years, more than 3 lakh lives have been saved.

It is said, if we are able to save even one life, we get a reward for the lifetime. I would like to thank each and every swachhagrahi out there, because of their efforts, we have been able to save more than 3 lakh lives.

Prime Minister Narendra Modi also awarded women warriors present at Kurukshetra, Haryana, for their contribution towards Swachh Bharat Abhiyan and urged them to continue their swachh work and help fulfill the dream of making India clean by October 2, 2019, the 150th birth anniversary of Mahatma Gandhi.

PM Modi was joined by Minister of Drinking Water and Sanitation, Uma Bharti. Addressing the gathering of Swachh Shakti event, she said,

Prime Minister Narendra Modi started the fight to make India clean back in 2014. Today, after four successful years of Swachh Bharat Mission, India has achieved great heights in swachhata. Not just that, Swachh Bharat Mission has helped evolve women of the nation. Today, our country has women swachhagrahis in every nook and corner. There are successful case studies that are being praised by the world. Look at Jharkhand, more than 50,000 women masons called Rani Mistris have broken the practice of toilets being constructed only by men. The women warriors took the charge in their own hands so that the state could achieve the open defecation free status successfully. It is a huge milestone, these women warriors have not only achieved the ODF tag but have also motivated millions of other women to do something for the mission.

Urging the women swachhagrahis present at Kurukshetra to contribute towards the last leg of the Swachh Bharat Mission, Uma Bharti signed off with a message,

“We all have done our bit to make India a cleaner and healthier nation and make it move towards a mark of 100 per cent open defecation free country. From mere 40 per cent of sanitation coverage in 2014 to more than 98 per cent sanitation coverage now, India has achieved a lot. But today we all have to start a new mission, we have to make a promise to ourselves and make sure our villages stay 100 per cent clean, waste-free all the time. We all have to take responsibilities and keep the nation swachh always. Let’s pledge, ‘Gandagi Se Nafrat Aur Desh Se Pyar’ (Discard filth and show your love for your country and make sure our nation remains clean always).”

Along with Uma Bharti, Chief Minister of Haryana Manohar Lal Khattar also participated in the event. Reaffirming Haryana’s commitment to the mission he said,

Haryana has taken many steps when it comes to meeting its swachh goals. Both the rural and urban areas of the state have successfully achieved open defecation free mark and now the state is moving towards ODF plus plus target that focuses on sustaining the open defecation free (ODF) status tag by ensuring toilet functionality, cleanliness and maintenance and fecal sludge management.

"#Swachhata has been given special priority across all districts in #Haryana. I thank all the women #Swachhagrahis for coming forward and making their contribution":
Hon'ble Chief Minister of Haryana, Shri @mlkhattar #SwachhShakti2019 pic.twitter.com/5BLrJ0H9pF

The first Swachh Shakti programme was launched in 2017 at Gandhinagar, the second Swachh Shakti event was held at Lucknow in Uttar Pradesh in 2018.

Swachh Kumbh Has Succeeded In A Big Way To Send Out The Message Of Swachh Bharat Mission: PM Narendra Modi