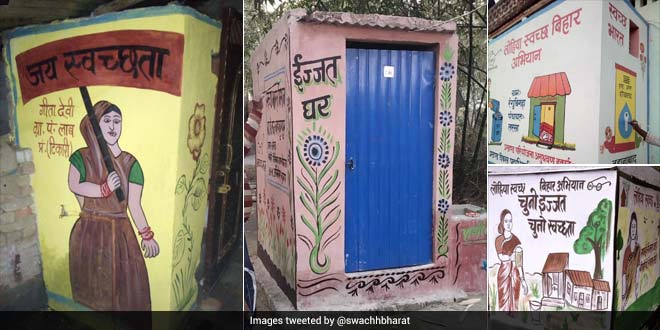 New Delhi: 36-year-old Sunita Kumari from Auraiya district of Uttar Pradesh stands with her 14-year-old daughter, next to her fully decorated toilet, sporting a Swachh message – ‘We will marry our daughter, where there is a toilet’. Not just Sunita, today more than 10 lakh toilets in rural parts of India have been decorated with messages of Swachhata or cleanliness. Thanks to the unique competition ‘Swachh Sundar Shauchalaya Contest’ (Clean Beautiful Toilet Contest) that has been started by the Ministry of Drinking Water and Sanitation (MoDW&S) with a motto to promote toilet usage, and mobilise rural households to beautify their toilets.

Also Read: How To Participate In Swachh Sundar Shauchalaya

The one month contest that began from January 1 encourages each and every district, village or rural block of India to decorate their toilet by painting murals, imbibing local art, incorporating Swachh Bharat Mission messages and logo in order to create awareness about the Clean India campaign and motivate those people who are still unaware about the mission. People have been asked to share the pictures of their beautified toilets on social media – twitter and facebook, with the hashtag #MyIzzatGhar or upload on the government portal.

The ministry has set an evaluation committee which will judge and come up with the list of awardees – individual households will get awards for innovative paintings, while, districts will be rewarded for getting the maximum number of toilets painted.

According to the ministry, this contest has achieved new heights, as already 475 districts in 28 states have decorated more than 6 lakh toilets in rural India.

Supporting the change towards a cleaner and healthier tomorrow, people in rural #India together achieved yet another milestone. More than 10 lakh toilets were painted by communities across 475 districts in 28 states under the #Swachh Sundar Shauchalaya contest. #MyIzzatGhar pic.twitter.com/CvU1CvAo1c

Here are some of the best pictures of the toilets that are successfully spreading the message of Swachh Bharat Mission:

This beautiful decoration of individual household toilets is from Karimnagar district in Telangana. The toilet art is spreading the message of why families should opt for a toilet and say no to open defecation and how they should together follow basic sanitation rules so that the toilet is always clean

Beautiful decorations of household #toilets were seen at various places in Karimnagar district, #Telangana under the ongoing #Swachh Sundar Shauchalaya contest. Here is a glimpse of the same. #MyIzzatGhar pic.twitter.com/nkWvAYlpGh

A great display of determination was seen among people in Auraiya district, #UP towards decorating their household #toilets and showing their support towards the ongoing #Swachh Sundar Shauchalaya contest. Here is a glimpse of the same. #MyIzzatGhar pic.twitter.com/ahGWkLM8rz

In Varkund panchayat of Daman district, people have decorated toilets with floral  patterns and Swachh Bharat Mission logo  along with slogans that guide people to fulfill the dream of Mahatma Gandhi and make India clean and swachh by using toilets and saying no to open defecation

In Varkund panchayat, #Daman district, household #toilets with innovative decorations were seen under the #Swachh Sundar Shauchalaya contest. Here are a few snapshots from the activities. #MyIzzatGhar pic.twitter.com/ol9LTBFgFU

Beautifully decorated household #toilets are seen everywhere in #Rajasthan. This shows the efforts and determination of the people in the state to ensure sustenance of this regular practice of safe #sanitation. Here is a glimpse of the same. #MyIzzatGhar pic.twitter.com/0vkxAZ0qFc

With messages like ‘Make India Swachh’, ‘Keep Your Toilets Clean’, people from Maharashtra showcased  their creativity in their own way

Here is a glimpse of the creativity displayed by people in Parbhani & Satara districts of #Maharashtra under the #Swachh Sundar Shauchalaya contest. Their aim has been to sustain the behaviour change achieved through the #SBM for a clean and healthy future. #MyIzzatGhar pic.twitter.com/ZMNGPw8bvo

With messages like ‘Help us keep the environment clean, use a toilet’ and ‘wash your hands after using a toilet’, participants from Jammu and Kashmir are spreading the swachh agenda

As a part of the ongoing #Swachh Sundar Shauchalaya contest, people across #JammuAndKashmir showcased their creativity while spreading the message of #Swachhata. Here is a glimpse of the same. #MyIzzatGhar pic.twitter.com/eSK1YyBRkC

In #Patiala district, #Punjab, unique decorations were seen on household #toilets across various places. Kudos to the support shown by people towards building a clean and healthy future for the nation. #MyIzzatGhar pic.twitter.com/yDkcyNcdkw

Creativity unleashed!! A woman painting her imagination on the walls of her toilet for #SwachhaSunderSauchalay contest. The main focus of the campaign is to improve usage of toilets and to own it which ultimately makes village/districts open defecation free. #ODF #MyIzzatGhar pic.twitter.com/9pKhYHLIw1

Swachh Survekshan 2019: 500 Schools In Mysuru To Adopt One Area Each To Win The ‘Cleanest City Of India’ Title