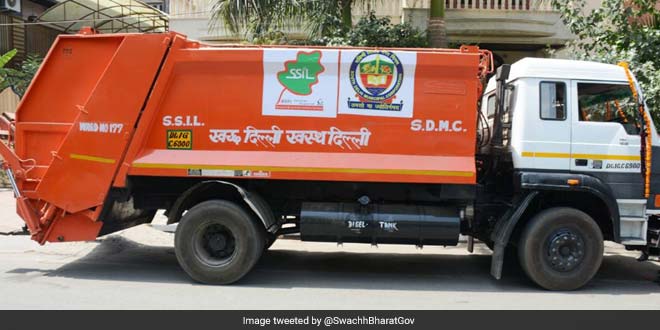 New Delhi: The Capital of city of Delhi is feeling the heat and it is not just the weather. From consistently battling air pollution, landfills that are well past their lifespan to a dying Yamuna, Delhi faces a herculean task of cleaning up its mess. So the latest improvement rankings for two of the three municipalities in Swachh Survekshan 2018, is news Delhi can briefly celebrate. South Delhi rose to the 32nd position, a jump of 170 places, while North Delhi’s secured the 206th position from the earlier rank of 279. On the flip side, East Delhi failed to board the improvement bandwagon, plummeting to the 341st position from 196. Delhi had performed abysmally in the Swachh Survekshan 2017 rankings. The only saving grace for the national capital came in the form of New Delhi Municipal Council, which ranked as the seventh cleanest city in India.

An emergency meeting held a week after the 2017 Survekshan results between the municipal commissioners of all three wings of the Municipal Corporation of Delhi (MCD) saw detailed discussions on Delhi’s poor performance and cooperating  wherever possible, to improve the capital’s performance.

South Delhi, touted as the most affluent neighbourhood of the capital did not have a proper cleanliness mechanism for many years. The municipal body fared poorly in 2017, but the poor show only made the civic body officials more determined to improve its performance in 2018. After the 2017 drubbing, the South Delhi Municipal Corporation (SDMC) introduced a variety of measures to achieve rapid improvement on the sanitation and cleanliness front. SDMC Commissioner Puneet Kumar Goel introduced weekly meetings on sanitation, waste management and garbage collection. Key officials took stock of progress made on all these fronts and ensured the systematic flow of work, be it construction of toilets or collection of waste.

We have mechanised collection of garbage in South Delhi, constructed more public toilets and kept South Delhi’s roads and streets cleaner. This resulted in positive feedback from the residents, and an overall good jump in the rankings for us, said Puneet Kumar Goel, Municipal Commissioner, SDMC.

In the past one year, 164 community toilets and 34 public toilets have been constructed by SDMC. The civic body has also made it mandatory for restaurants and petrol pumps to open their toilets for public use. Over 3,000 waste collectors working for SDMC have been provided with necessary equipment to collect garbage. 55 per cent of the 3,500 kg of waste collected daily is being processed, and the civic body has set up composting pits in more than 6,000 parks. All these steps have contributed in the improvement of South Delhi’s ranking.

North Delhi Municipal Corporation (NDMC), which scored 3,029 out of 4,000 to get to the 206th position, has an improved garbage collection system to thank, for its elevated rankings. The municipal corporation hired over 1,200 new waste collectors and also brought 70 new garbage collection vehicles. In areas like Narela, Rajinder Nagar, Moti Nagar, where waste collection was erratic and often incomplete, garbage collection vehicles have now begun covering all households, collecting waste twice a day. The civic body has also been instrumental in encouraging in-house composting, and over 1,500 households in 21 wards are composting waste regularly. The civic body has done exceptionally well in improving the sanitation scenario, with all its 104 wards declared as open defecation free. On stray incidents of open defecation, NDMC mayor Adesh Gupta recently requested the residents to avail the toilet facilities provided by the civic body. 623 public toilet complexes are currently operational in NDMC.

“We are happy that we have shown significant improvement in our rankings. Door-to-door garbage collection has improved in the past one year, and a larger number of residents no longer dispose garbage openly. Areas where waste generation is high are seeing two or sometimes three trips by waste collection vehicles daily. Open defecation has nearly ended, and in areas where there are minor instances of open defecation, NDMC teams visit regularly and encourage them to use public toilets,” said Madhup Vyas, Commissioner, NDMC.

Though content with the jump in rankings, NDMC strives to improve further this year. The targets set for this year are 100 per cent door-to-door garbage collection and 100 per cent segregation across all wards. Mr Vyas is confident that if these two targets are achieved, NDMC can rank among the top 20 cleanest cities in India.

Delhi’s sole underperforming municipal corporation the East Delhi Municipal Corporation (EDMC), plummeted 145 places and found itself in the 341st position. EDMC scored 1,510 out of 4,000, securing less than 50 per cent in all the weightages assigned under the Survekshan. The most densely populated part of the national capital, East Delhi’s civic problems have been plagued by regular strikes, irregular garbage collection and ill-maintenance of public sanitation facilities. The civic body witnessed seven incidents of strikes by waste collectors throughout 2017, which dented the municipal body’s rank, feels Additional Commissioner Ashok Kumar. The EDMC has also alleged serious fund crunch. In March this year, the civic body requested for a loan of Rs 483 crore from the Delhi government to complete some of its projects. Under the MCD budget of 2018, EDMC was allocated Rs 687 crore.

We have found it very difficult over the past one year to pay salaries regularly to our employees and safai karmacharis (Sanitation workers). Regular strikes by them for better work conditions result in non-collection of garbage for days, which dented our ranking. Public toilets are also not cleaned regularly, resulting in people often preferring to defecate in the open, said Mr Kumar.

Talking about EDMC’s plan to climb the rankings ladder, Mr Kumar said that the civic body was trying to secure a loan from the government, to clear salaries of waste collectors and regularise door-to-door waste collection. EDMC is also trying to bring in private companies into the play, hoping that their presence will boost the sanitation scenario.

“We have got in touch with a few private organisations who can take over the toilets and ensure their maintenance. That way, people will have regular access to clean toilets and open defecation will come to an end,” said Mr Kumar.

New Delhi Municipal Council Breaks In To The Top 5

Delhi’s considerably improved performance will be a confidence booster for the national capital, especially the improvement shown by the south and north civic bodies. Both south and north will be looking to improve their positions further in the coming year, and have decided to focus on garbage collection and segregation majorly. Implementation and simultaneous monitoring will be the key for both SDMC and NDMC to improve their rankings, or else their fate might mirror the journey downhill witnessed by EDMC.

India Among Eight Nations To Get Funds For Marine Conservation