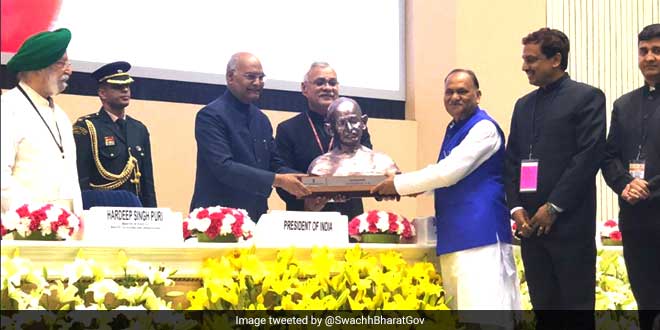 New Delhi: After achieving the first rank last year, Jharkhand was declared as the second best-performing state at the Swachh Survekshan 2019, as Chhattisgarh climbed up on the top. However, Jharkhand’s cities’ performances were recognised in various categories including solid waste management and innovation and best practices. The state also has the two out of the top three cleanest Ganga towns in the pan India cleanliness survey.

Out of the 42 local bodies in Jharkhand, all of them are certified as ODF, 30 are ODF plus and Jamshedpur is ODF Plus Plus. Also, all the 42 local bodies practice waste segregation at source. This year, we have constructed numerous community as well as Pink toilets with menstrual hygiene facilities to sustain the ODF tags. On the other hand, upon realising the consequences of unmanaged waste, Jharkhand is trying hard to achieve 100 per cent waste management.

Mr. Kumar explained that the state has installed numerous Solid Waste Management (SWM) plants and is focusing on engaging the traditional rag pickers and sanitation workers with these plants, to train them on how to recycle the dry waste.

On the other hand, when it comes to the wet waste, Mr. Kumar told NDTV that Jharkhand has adopted a decentralised mode of waste processing, and has installed composting units in the vegetable markets and other such identified areas where wet waste may be generated on a regular basis.

We have also identified the commercial and residential areas that generate more than 100 kilograms of waste per day and have persuaded them to install composting kits in their community, throughout the state.

Talking about the achievements by Jharkhand and its cities, Mr. Kumar said that Jamshedpur is the best performing city in the state which managed to score the 15th rank in the list of best performing cities and has also attained an ODF Plus Plus status.

In the newly introduced category of the best performing Ganga towns, Jharkhand has two contenders in this category ranked at number two and three Rajmahal and Sahibgani respectively.

Jharkhand Chief Minister Raghubar Das took to twitter to congratulate and thank the 23 crore citizens of the state on these achievements.