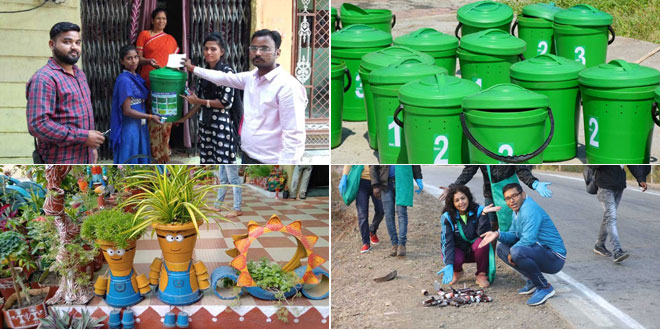 New Delhi: “It was difficult, we lacked fund and there were infrastructural challenges, but we did it! We made waste segregation a part of the life of the people of Madhya Pradesh and we dedicate the ‘Best performing state in Solid Waste Management’ award to the citizens of our state. We have received immense cooperation from them,” said Neelesh Dubey, State Mission Director, Swachh Bharat Mission proudly on the announcement of Madhya Pradesh winning the best performing state award for solid waste management in the Swachh Survekshan 2019.

Madhya Pradesh, was able to achieve the title due to various initiatives undertaken by the state government focusing on waste management like door-to-door garbage collection, waste segregation, recycling, and composting. The state became the first in the country to achieve 100 per cent door-to-door garbage collection in all of its 378 urban local bodies (ULBs) in February 2018. In October 2017, with the construction of 4.80 lakh household toilets, Madhya Pradesh declared all its ULBs as open defecation free (ODF).

According to Mr. Dubey, the state government provided vehicles like magic vans, which are four wheeler petrol/diesel to the garbage collectors who earlier used hand pushed carts for trash collection. These vans made waste collection easier, faster, and improved in terms of increase in number of households from where waste got collected.

Apart from collecting waste, segregation it at source was also done on a mission mode in the state for which the state government conducted numerous awareness building programmes among citizens. People were asked to convert the wet waste, mainly organic kitchen waste, into compost for which the state government established composting units across the state. The compost thus produced is being distributed to local farmers.

Dry waste like plastic, metal, and paper waste collected gets recycled and reused by various recycling units in the state. The state government has facilitated tie-ups between urban local bodies and recycling units for managing dry waste. The recycling units buy the dry waste from ULBs which further sell it to suitable manufacturing firms which can use it as part of raw-material.

Mr. Dubey said that as a part of the waste management strategy of the state, thousands of tonnes of plastic bags seized from the market and collected from waste have been sent to cement factories for incineration. He said that the gas produced from incinerating plastic bags in over 1000 degree Celsius, can be used as a fuel for the factory. This process, as per Mr. Dubey has been approved by the pollution control board and does not pollute the air.

While the state as a whole performed well in the Swachh Survekshan 2019, eight of its cities – Indore Ujjain, Dewas, Bhopal, Khargone, Nagda, Singrauli, and Jabalpur, are among the top 25 clean cities of India. Indore continued to be the star of the survey and once again became the cleanest city of India, Bhopal, it though slipped 17 places from its last year’s number 2 rank, but attained the title of the cleanest capital city and Ujjain became the cleanest medium city with a population between 3-10 lakhs.

Ministry of Housing and Urban Affairs (MoHUA) has been conducting Swachh Survekshan (cleanliness survey) every year since 2016 to evaluate the performance cities in achieving the cleanliness standards under the Swachh Bharat Mission.

Gurugram Is The Most Polluted City In The World, 15 Of The Top 20 Polluted Cities Are Indian: Greenpeace Study

Swachh Survekshan 2019: From Rank 1 to 2, Jharkhand’s Journey As One Of The Cleanest States In India