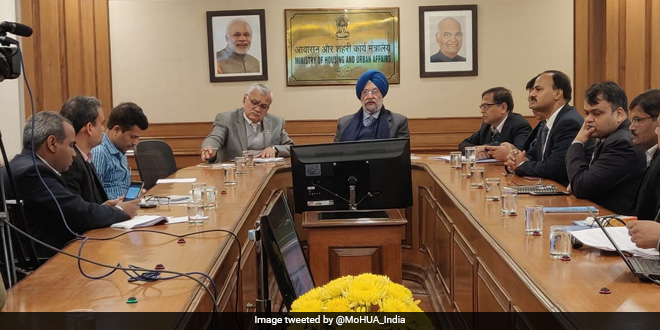 New Delhi: On Friday, January 4, the Minister of Housing and Urban Affairs Hardeep Singh Puri kick-started the fourth edition of what the government claims to be the world’s largest cleanliness survey – Swachh Survekshan, to assess cities of India on their swachh quotient. Starting from today, Swachh Survekshan 2019 will continue till January 31, the results of which will be collated and announced in March 2019. In its fourth year, the survey will be conducted across 4,237 towns and cities and 62 Cantonment Boards, impacting around 40 crore people. For the same, 2,500 assessors and 200 officials have been trained.

MoS H&UA @HardeepSPuri launches Swachh Survekshan 2019, the largest cleanliness survey in the world, at an event in Delhi.

“I am sure the cities, the Urban Local Bodies (ULBs) and citizens who have wholeheartedly adopted Swachh Bharat Mission and transformed it into a Jan Andolan must be all excited and geared up for this survey. I wish them all the luck and hope their efforts pay off”, said Minister of Housing and Urban Affairs Hardeep Singh Puri, after the launch of the survey.

I am sure the cities, the ULBs & citizens who have wholeheartedly adopted Swachh Bharat Mission & transformed it into a Jan Andolan must be all excited & geared up for this survey. I wish them all the luck & hope their efforts pay off. 5/5 pic.twitter.com/rtATMR80Eg

This year, the Ministry of Housing and Urban Affairs has widened its scope, and as compared to previous years, it is supposed to be bigger and better. For the same, one of the major decisions the ministry has taken is to go paperless and conduct the survey digitally via online management information system (MIS). Swachh Surekshan 2019 has many differences from the previous versions.

Also Read: Here’s How India Is Gearing Up For Swachh Survekshan 2019

5 things to know about Swachh Survekshan 2019:

Independent agency carrying out the survey will collect feedback from citizens directly, through outbound calls, swachhta helpline number 1969, swachhta app and Swachh Survekshan 2019 portal. Apart from all this, citizens’ feedback on civic issues posted on Swachhata-MoHUA, a mobile application will also be evaluated.

Under certification introduced by the MoHUA, while 5 per cent weightage (250 marks) has been allotted to the cities that have successfully achieved ODF, ODF plus, and ODF plus plus status which refers to sustaining ODF tag by ensuring toilet functionality, cleanliness and maintenance and fecal sludge management, 20 per cent weightage (1,000 marks) have been allotted to ‘star rating’ achieved by cities as per the protocol released by MoHUA. The star rating protocol is based on 12 parameters and follows a SMART framework – Single metric, Measurable, Achievable, Rigorous verification mechanism and Targeted towards outcomes. SMART includes components like cleanliness of drains and water bodies, plastic waste management, managing construction and demolition waste, and other things.

To help citizens be part of the survey, in August 2018 the MoHUA launched Swachh Survekshan 2019 survey toolkit, ODF plus and ODF plus plus protocol and ‘swachh manch’. While the Swachh Survekshan 2019 survey toolkit contains the detailed survey methodology, ranking criteria, change in assessment weightage, and component indicators with scores, ODF plus and ODF plus plus protocol focusses on sustaining ODF tag and fecal sludge management.

Sharing the details of both toolkit and protocol, Minister Hardeep Singh Puri, said, “The purpose of this toolkit is to provide guidelines for cities and towns that have already achieved ODF status and are working towards ensuring sustainability of the ODF status.”

The purpose of this toolkit is to provide guidelines for cities and towns that have
already achieved ODF status and are working towards ensuring sustainability of
the ODF status. pic.twitter.com/zAe4ZAsrwu

‘Swachh Manch’, a web portal was launched with a motive to bring together different stakeholders under one roof and encourage large scale citizen participation. It is for the citizens to connect and contribute in achieving the dream of Swachh Bharat.

MoS H&UA @HardeepSPuri launches 'Swachh Manch', a platform for citizens to
connect and contribute to the overall cleanliness of their respective cities. pic.twitter.com/HQgkOZZQkv

All About Swachh Survekshan