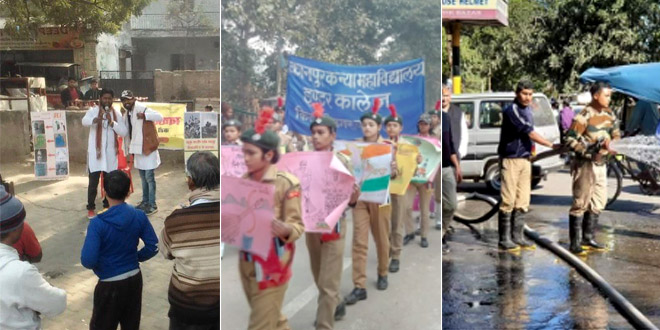 New Delhi: It is that time of the year again when cities of India are gearing up to be assessed on their swachh quotient through the annual cleanliness survey of urban India – Swachh Survekshan. The 2019 survey will kick-start from January 4 in more than 4,237 cities and 62 cantonment boards of India with a motto to make cities move towards ODF plus and ODF plus plus protocol that focuses on sustaining the open defecation free (ODF) status by ensuring toilet functionality, cleanliness and maintenance and faecal sludge management. 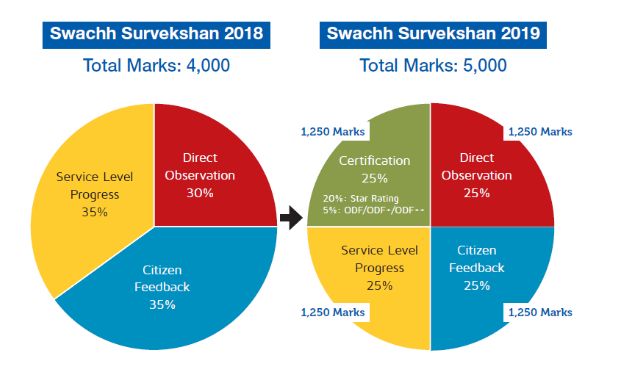 The Ministry of Housing and Urban Affairs has made several changes in the survey, for example, the survey this time will carry a total of 5,000 marks as compared to Swachh Survekshan 2018 that was for 4000 marks. Moreover, this year a new section of ‘certification’ has been added that holds 25% weightage. The certification is divided into two aspects, 5% weightage has been allotted to cities that have successfully achieved the ODF title and the second feature is of star-ratings, wherein cities are assessed on different parameters of waste management (Also Read: 5 Waste Management Terms Everyone Should Know About) and collection system. The weightage for star-rating of garbage free cities is 20%.

Over the last four years, there has been a paradigm shift in the way cities are being assessed for their cleanliness, as per the Ministry of Housing and Urban Affairs, the motto of Swachh Survekshan 2019 is to ensure that the ministry is getting outcomes (more number of ODF wards and cities), rather than outputs (more numbers of toilets built).

The fourth edition of Swachh Survekshan commencing from January 4 will continue till January 31, 2019. Here’s a look at how the cities vying to be India’s cleanest city:

A Swacchhta Rath In Greater Mumbai

To guide Mumbaikars about Swachh Survekshan 2019 and how they can contribute to make their city No. 1, a special Swachhata Rath has been introduced by the Municipal Corporation of Greater Mumbai. The Swachhata Rath will move around the city to educate people on what to do and what not to do in order to keep their city spick and span.

A #Swachhata Rath was launched by the Municipal Corporation of Greater Mumbai to create awareness about the upcoming #SwachhSurvekshan2019.#MyCleanIndia #SwachhBharat pic.twitter.com/QyEixG2TBd

Ambikapur was rewarded as one of India’s best city in ‘Innovation and Best Practices’ category in Swachh Survekshan 2018. The reason – the city is known to manage 100 per cent waste effectively and not just that it is earning money from it.

What Ambikapur is following from many years now is the simple thumb rule – ‘my waste, my responsibility’. Every morning 447 sanitation workers go across the city to collect garbage from home, through 17 secondary segregation centres they help sort all its waste into various categories. The waste depending on its category is then sent for recycling, composting or other kinds of processing.

On a monthly basis just by following waste management effectively, the city is earning Rs. 1 lakh by converting its wet waste into compost, and another Rs. 6-8 lakh from the sale of recyclable items.

To continue the tradition of being the game changers when it comes to waste management, this year the city is spreading the message of Swachh Survekshan 2019 by distributing home composting units to encourage people to take up composting at home (Also Read: 5 Simple Steps To Turn Household Waste Into Compost)

Authorities in Surat have looped in different Self Help Groups (SHGs) to spread the message of Swachh Survekshan 2019 in the city. The SHGs have been given the duty of going door-to-door in the city and guide people about managing their own waste through composting and recycling.

Guwahati’s municipal corporation is making people aware about the Swachh Survekshan 2019 through rallies in different parts of the cities. With the messages of ‘No littering’, ‘Say yes to waste segregation’, ‘Manage your waste’ kind of messages, the civic body targeted the heavy footfall areas such as red lights and markets for the rallies.

Currently, Indore is the first city to apply for a seven-star rating, which is the first-of-its-kind rating tool for assessing the cleanliness of cities and towns in India and motivate them to move towards becoming a 100 per cent garbage-free city. Indore attained ODF ++ (Open Defecation Free Plus Plus) status, late November for achieving sanitation sustainability. It also now boasts of being a zero-landfill city, which means that none of the waste generated ends up in the landfills. Moreover, the officials have claimed that it has 100 per cent door-to-door waste collection and 100 per cent waste treatment and waste-free local water bodies.

Not just that, 25,000 houses across the city are managing their waste successfully through composting. Continuing the tradition of being the best in all cleanliness-related parameters, Indore this time is organising awareness campaigns every day and motivating people to contribute towards the Swachh Survekshan 2019 by helping Indore meet the cleanliness targets. From home composting awareness campaigns to sanitation workers making rangoli in front of all the houses in the city with special Swachhta messages, the city is doing its bit to retain its title of being the cleanest city of India two years on the trot in 2017 and 2018.