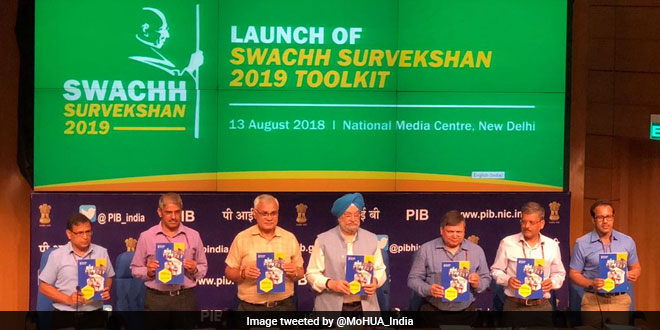 New Delhi: Minister of Housing and Urban Affairs Hardeep Singh Puri launched the fourth edition of the annual cleanliness survey of urban India – Swachh Survekshan 2019 on Monday, August 13 in New Delhi. Widening its scope, this year, Swachh Survekshan 2019, will be conducted across all cities and towns in the country. The cleanliness survey is expected to begin from January 4, 2019 and will continue till January 31, 2019. Along with this, the minister launched Swachh Survekshan 2019 survey toolkit, ODF plus and ODF plus plus toolkit and swachh manch – a web portal, to encourage large scale citizen participation.

MoS H&UA @HardeepSPuri at launch of Swachh Survekshan 2019 & Ease of Living Index in Delhi. #SwachhSurvekshan2019 will be carried out across all urban areas this year. The Ease of Living Index will help cities assess their liveability vis-à-vis global & national benchmarks. pic.twitter.com/UnIsKzq2oy

While the Swachh Survekshan 2019 survey toolkit contains the detailed survey methodology and component indicators with scores to help cities prepare themselves for taking the survey, ODF plus and ODF plus plus protocol focusses on sustaining ODF tag by ensuring toilet functionality, cleanliness and maintenance and fecal sludge management. Sharing the details of both toolkit and protocol, Minister Hardeep Singh Puri, said, “The purpose of this toolkit is to provide guidelines for cities and towns that have already achieved ODF status and are working towards ensuring sustainability of the ODF status.”

The purpose of this toolkit is to provide guidelines for cities and towns that have
already achieved ODF status and are working towards ensuring sustainability of
the ODF status. pic.twitter.com/zAe4ZAsrwu

He added, “It provides the detailed SBM ODF+ and ODF++ protocol laid along with declaration formats to be obtained from various stakeholders, that wards/work circles and cities are required to submit, as part of declaration and certification process.”

It provides the detailed SBM ODF+ & ODF++ protocol laid along with declaration formats to be obtained from various stakeholders, that wards/work circles & cities are required to submit, as part of declaration & certification process. pic.twitter.com/RZFDHFb7Kj

A web portal ‘Swachh Manch’ was launched with a motive to bring together different stakeholders under one roof. It is for the citizens to connect and contribute to the overall cleanliness of their respective areas.

MoS H&UA @HardeepSPuri launches 'Swachh Manch', a platform for citizens to
connect and contribute to the overall cleanliness of their respective cities. pic.twitter.com/HQgkOZZQkv

1. This year, cities will be ranked out of the total of 5,000 marks and data will be equally collected from four different sources – citizen feedback, direct observation, service level progress and certification for garbage and open defecation free cities.

2. Under service level progress, all the cities will be evaluated on seven different parameters.
-Collection and transportation of municipal solid waste (27 per cent)

-Processing and disposal of municipal solid waste (30 per cent)

-Innovation and best practices (5 per cent)