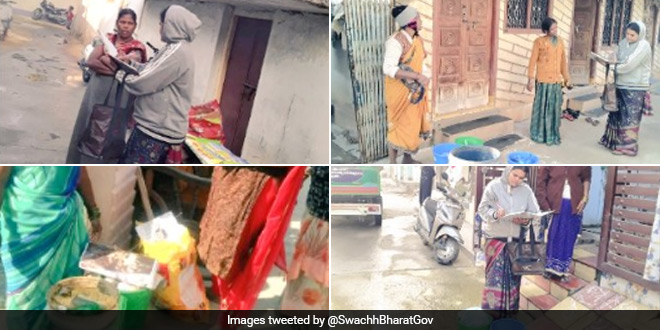 Mumbai: It is five in the morning and even before the alarm rings, Hyderabad-based Vimla Narayan, a housewife, is wide awake. On the fifth day of 2019, she wraps up finishes her household chores by eight, she is in a rush and needs to be somewhere this morning. Vimla takes a bus and reaches the headquarters of Greater Hyderabad Municipal Corporation (GHMC) an hour before the reporting time. She is excited but also a bit nervous. Along with 600 other women, Vimla is an integral part of what is being dubbed as the world’s largest cleanliness survey

Like Vimla, most of these women are from Self-Help Groups (SHGs) in the city and they have been appointed as ‘Swachh Dooths’ by the GHMC to improve its performance in Swachh Survekshan 2019 and gain a top position among the cleanest cities of India. Last year the ranking of Hyderabad had slipped to 27th from 22nd in 2017. (Also Read: Here’s How India Is Gearing Up For Swachh Survekshan 2019)

The project has been designed under the guidance of GHMC Commissioner M Dana Kishore who suggested that if women appealed to the housewives to segregate waste, the results will be more than satisfactory.

The idea behind involving women is that they will be able to communicate the messages in an effective manner. Homemakers will be more comfortable to raise questions and clear doubts with women representatives. Once there is a change in the behaviour it will be easy to implement waste segregation which in turn will help us score better marks at in the Swachh Survekshan, says a sanitation official from GHMC.

The appointed Swachh Dooths or cleanliness volunteers will adopt a door-to-door policy to spread awareness about waste management.

There is a total of 150 wards in Hyderabad and each volunteer has to cover approximately 600 households. The volunteers begin the exercise around 9 am and dedicate up to 3-4 hours every day. They give out information like difference between wet and dry garbage, composting wet garbage at home and keeping the dry garbage separately for recycling purposes. In houses where the family has no clue about waste segregation, the volunteers even give demonstration.

I have covered about 25 houses and most of them were vaguely aware about waste segregation but only a few were practising it. On asking why they were not following the guidelines of waste management, majority of them said they were unsure about the category of waste. I have provided the households with a list of wet and dry garbage, says Vimla, who covers the Uppal ward.

From informing them about the composting process, shops from where they can buy composting materials, using manure generated from waste in their gardens, the ‘Swachh Dooths’ are also responsible for giving people lessons on how to treat waste on their own.  Along with waste management, the volunteers also tell people to maintain cleanliness at home and in their surroundings to gain points under the cleanliness survey.

The conversation around Swachh Bharat Abhiyan has reached every part of the country and people are excited to see how the government will fulfill Mahatma Gandhi’s dream of a Clean and an Open Defecation Free nation. Seeing the spirit of the stakeholders who are working towards the dream, I also wanted to contribute my bit. I was very glad to welcome a Swachh volunteer to my house as I needed guidance on waste segregation. I already have two-coloured bins and I will try to separate the waste as effectively as possible, says Swati, a housewife.

Apart from appointing the ‘Swachh Dooths’, the civic corporation has also installed speakers and mike in 2,500 autorickshaws to play out messages on cleanliness to sensitise people. Bike rallies are being conducted once a week by the sanitation workers from GHMC till the end of the survey. Through the rallies, the workers make announcements related to the cleanliness survey and encourage people to participate in the same.

As a part of Swachh Survekshan, the GHMC is installing upscaled twin bins made out of plastic, in major commercial stretches of Hyderabad. Each twin bin be made by recycling 25 kilos of plastic waste.

A massive slum beautification drive is also underway in the city. Under this drive, city-based painting artists will paint the walls around slums to discourage the people from throwing garbage and urinating and defeating in the open.

As a part of #SwachhSurvekshan2019 @GHMCOnline undertakes massive slum beautification drive under #CSR. As a Swachhata good practice- a beautiful spot is kept clean and litterfree by residents too.#MyCleanIndia #CleanHyderabad. pic.twitter.com/KwASHNdAMp

On January 4, the Minister of Housing and Urban Affairs Hardeep Singh Puri kick-started the fourth edition of Swachh Survekshan, to assess cities of India on their Swachh quotient. The survey will continue till January 31 and the results will be collated and announced in March 2019. In its fourth year, the survey will be conducted across 4,237 towns and cities and 62 Cantonment Boards, impacting around 40 crore people. For this year’s survey, 2,500 assessors and 200 officials have been trained.